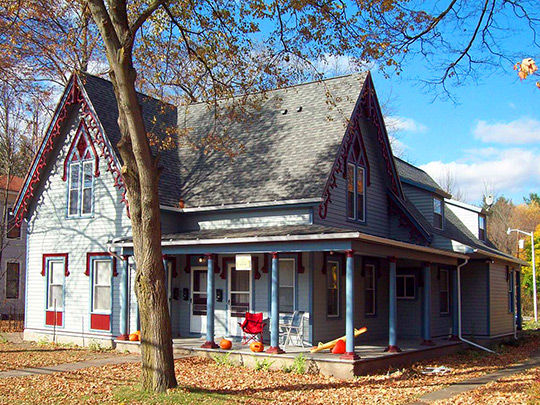 Named for the self-proclaimed "Baron" Frederick Wilhelm Gerhard Augustin von Steuben (1730-1794). Von Steuben was a former Prussian Army officer and subsequently served as a professional courtier. After failed attempts to regain a military commission, he met Benjamin Franklin in Paris in 1777 and volunteered to serve in the Revolutionary army for no pay. By the time of the infamous winter of "Valley Forge," (1788) von Steuben was serving there under General Washington. He is credited with bringing needed discipline and sanitary practices to an army that is described to have been "rag-tag."

Discharged in 1784, von Steuben retired to New York where he eeked [sic] out a number of failed business ventures which apparently were "tolerated" due to respect for his contributions during the War as well as the prospect of a government pension. It wasn't until 1790 that he was granted an annual pension of $2,500, but by that time his financial condition was dismal. Friends, including Alexander Hamilton, helped him obtain 16,000 acres with a nominal mortgage. Von Steuben died, unmarried, in 1794. He willed his property to William North and Benjamin Walker, both of whom were his former aides.