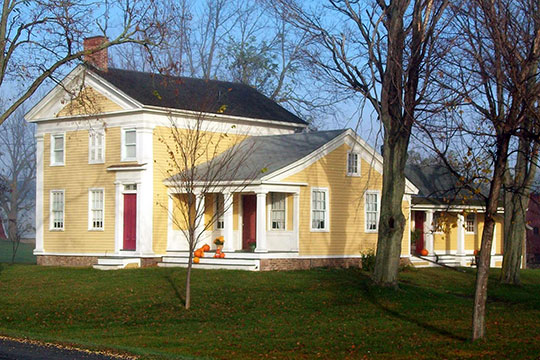 Barre was erected from the Town of Gaines by an act of the Legislature dated March 6, 1818, and formed a part of Genesee County until the County of Orleans was organized in 1824. It was named by the Honorable John Lee from Barre, Massachusetts, where he was born. Judge Lee came here in 1816 and located in that part of town afterward called Lee's Settlement.

The first actual settlers in Barre came to the town in 1816. Prior to that date the Holland Land Company had caused the Oak Orchard road to be cut through over an Indian trail, but it had become so overgrown with underbrush that it was almost impassable. Nevertheless it was the route by which the early settlers came in to locate their lands. This thoroughfare was laid out four rods wide. The Lee road was opened in 1817, and from then till 1820 most of the important roads in town were rendered what was then termed passable. They generally pursued serpentine courses, and over wet or swampy places were improved with corduroy crossings. The early settlers were poor but industrious, and the lenient policy of the Holland Land Company enabled them to buy land, clear it, and make for themselves and their families excellent farms and comfortable homes. Pioneer life and primitive conditions here were not unlike those of neighboring localities. The rude log cabin, without floor or window or chimney, warmed only by an impoverished fireplace, protected the settler's family until means could be obtained with which to improve it or to replace it with a frame dwelling.

The first settler was Stephen Paine. He was born in Scituate, Rhode Island, and removed to Richfield, NY, thence to Ontario County, and from there to Barre in the autumn of 1815. He took an article for a part of a lot, and February 21, 1816, he came with his family, consisting of his wife (whose maiden name was Sally Auger), and ten children. They arrived at Booth's tavern on the Ridge on the evening of February 25. The next morning the father and his son Angell came on foot by way of the Oak Orchard Road to Mattison's tavern, 3/4ths of a mile north from Benton's Corners, arriving about noon. In the afternoon they cleaned out a rude log house which had been used by Oliver Benton during the winter as a shed or stable for cattle. It stood on the east side of Oak Orchard Road, a short distance from the Poorhouse Road. The rest of the family, with their few household goods, arrived late in the afternoon, and they passed their first night and their first few weeks there, feeding their small stock of cattle and sheep on browse.

The surface of the town is gently undulating, and the soil is generally a clay loam on the uplands and muck in the swamps.

The first town meeting in Barre (which then included Albion) was held at the dwelling of Abram Mattison on Oak Orchard Road, a mile and a half south of Albion Village, in the spring of 1818. Judge Lee presided. Later town meetings convened at Benton's Corners and still later at Barre Center.