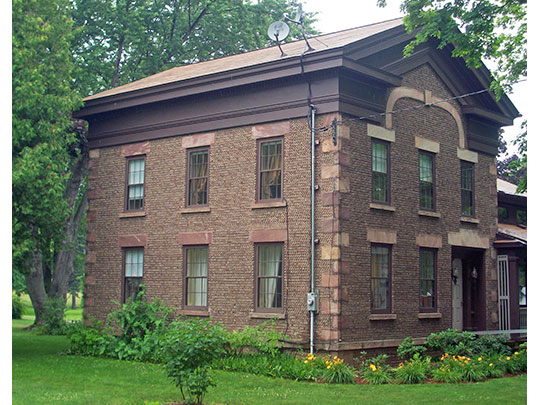 About a decade prior to its incorporation, Lyndonville was a postal village and a station on the R. W. & O. Railroad with a population of about 600. It was originally known as Lyndon, deriving its name from Lyndon, VT; but when application was made for a post office, the authorities added the "ville" to distinguish it from another location named "Linden." The first postmaster was Samuel Tappan. The first store was opened by Laurin and Nathan Martin, two cousins, who came here in 1830. Laurin Martin was long conspicuous in educational matter and an active member of the Baptist Church. He died here July 5, 1880.

Among other merchants who followed the Martins were Smith & Babcock, Royal Chamberlain, Merritt Hard, and James O. Stokes, Jr. The first hatter was Samuel Clark.

Peter G. Klock, about 1830, built a carding and cloth dressing mill. It was operated by water power and in 1835 was sold to H. C. Soule. Later it was converted to a shingle mill. The first wagon maker was Samuel C. Sinclair, and the first tailor was John Kaiser. John Page was the first cooper.

The first bridge across Johnson's Creek at this point was erected of logs about 1818.

In 1894 Lyndonville consisted of 3 general stores, 2 drug stores, 2 hardware stores, a meat market, 1 furniture and crockery store, a shoe shop, a jewelry store, 2 milliners, 1 hotel, 2 liveries, 2 blacksmith shops, a wagon shop, a foundry and planing mill, a lumber yard, a large slaughter house, 2 coal yards, 2 cooper shops, 1 harness shop, 2 physicians, 1 dentist, 1 or 2 barbers, and 2 or 3 public halls. There were also 2 churches and a union school and library. The postmaster in 1894 was Dr. R. B. Wright, who came to Lyndonville in 1876. His father was a British solider during the American Revolution.