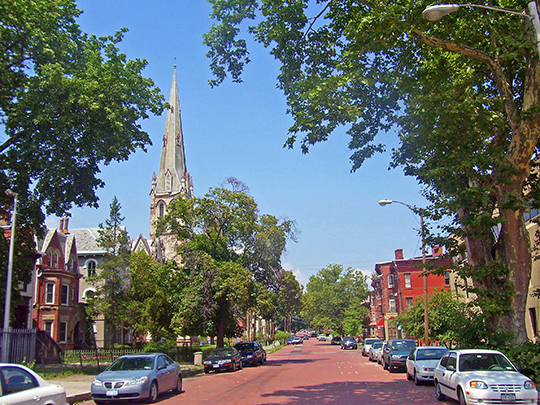 The Montgomery-Grand-Liberty Streets Historic District was listed on the National Register of Historic Places in 1973. [‡] Portions of the content on this web page were adapted from a copy of the original nomination document.

A primarily nineteenth century residential neighborhood, the district also contains nine churches and several public buildings. Various stylistic elements are represented in the residences. The houses, however, are generally two or three story structures, with the majority constructed of brick. Clapboard is the second most frequently used covering, with shingles and occasional stucco also employed. Three basic roof styles, the mansard, the gable, and the flat roof with decorative cornice are found. Some of the structures on Grand and Liberty Streets are row houses.

Quite apparent is the influence of Andrew Jackson Downing and Calvert Vaux which gave direction to much of the building after 1840. As cottages and villas were built many incorporated Gothic elements. Homes such as the Warren Coldwell House at 196 Montgomery Street which is design No. 16 and the Halsey Stevens House at 182 Grand Street which is design No. 10 are found in Calvert Vaux's book Villas and Cottages. Other villas and cottages sprang up, often with Italianate elements such as the General William Hasbrouck House, known as the Tuscan Villa. Also illustrating this motif are 196 and 244 Grand Street.

Following the Civil War houses of a more ostentatious and grandiose scale came into vogue, many with mansard roofs. Outstanding examples of this phase of building includes 222, 226, 230 Montgomery Street and 275, 297 Grand Street.

A few of the outstanding buildings in the Montgomery, Grand, Liberty Streets Historic District include:

The two story Tuscan Villa which is scored stucco over brick and has twin gable roofs with a center cupola. Built about 1838 it was owned by William C. Hasbrouck, and is splendidly situated on a hill overlooking the Hudson River.

David Crawford's home at 189 Montgomery Street, has been individually listed on the National Register. The two and a half story clapboard structure has a two story porch with Ionic columns and a Palladian attic window. The 1829 structure is owned by the Historical Society of Newburgh.

A two story brick structure with sandstone trim, the Newburgh Free Library was built in 1876 and designed by John Wood. The building is of particular interest in that it is closely related to the Vassar Institute in Poughkeepsie, by the same architect.

Newburgh's City Club was constructed about 1855 for Dr. W. A. M. Culbert as designed by A. J. Downing and Calvert Vaux. The two and a half story brick structure with sandstone trim and curved mansard roof has elaborate interiors.

Alexander Jackson Davis under the supervision of Russell Warren designed the 1835 Protestant Reformed Dutch Church. A rectangular building of stucco over stone rubble with 37 foot high Ionic wood columns. The structure has a pedimented gable roof supported on wood trusses over a coffered ceiling. It is also listed on the National Register.

The Halsey Stevens home at 182 Grand Street is a two and a half story brick structure with a two toned slate mansard roof and projecting center hall. It is based on design No. 10 of Villas and Cottages and was built about 1855.

A two story building set in a small park donated by Newburgh's citizens, the 1842 Courthouse is similar in design to the Dutch Reformed Church. Built of brick covered with stucco, it has Ionic wood columns and a pedimented gable roof. Thornton M. Niven designed the building and also had a residence in Newburgh.

Newburgh is a fine collection of residences and public buildings, several designed by outstanding architects whose influence carried far beyond their own works.

Newburgh's Montgomery, Grand, Liberty Streets Historic District is significant as an outstanding architectural collection of buildings. Built in part by the wealth produced by Newburgh's waterfront, the area was unique in the renown of the architects that came to practice there. Drawings of some of these buildings they designed for the district were used as illustrations in the books they wrote, making the buildings prototypes in a new architectural era.

Having played its role in the Revolutionary War, as a site of Washington's Headquarters, Newburgh began in the early 1800's to build its river trade. By the mid 19th century an abundant amount of wealth had been generated and a commercial waterfront established. The town's fine residential section began to develop in the Montgomery-Grand Street area, overlooking the Hudson River.

Newburgh had already been the recipient of the works of Alexander Jackson Davis who designed the Dutch Reform Church in 1831 and Thornton Niven who planned the Courthouse in 1841.

The 1840's were architecturally dominated by Andrew Jackson Downing one of Russel Lynes' celebrated "tastemakers." Downing started as a landscape expert with his father and brother, and together operated a nursery known as Highland Gardens, just north of Broad Street. Andrew rapidly expanded his interest to include architecture, especially that of the villa, or home of the upper and wealthy classes. While in England he persuaded architects Calvert Vaux and Frederick Withers to join him in Newburgh to practice architecture and landscape design. Their office flourished in Newburgh well into the later half of the 19th century despite the tragic death of Downing in a steamboat accident in 1852.

In addition to their design of specific houses, the group contributed significantly to the spread of architectural design. Downing published numerous articles and Vaux authored Villas and Cottages in 1957 acknowledging many of Downing's designs. A. J. Davis, mentioned earlier, was a close collaborator of the group and provided many designs and drawings for Downing's publications.

Hence, Newburgh's Montgomery-Grand-Liberty Street area is a product of the well-timed co-existence of new wealth and architectural genius that combined to produce many fine residences and public buildings.