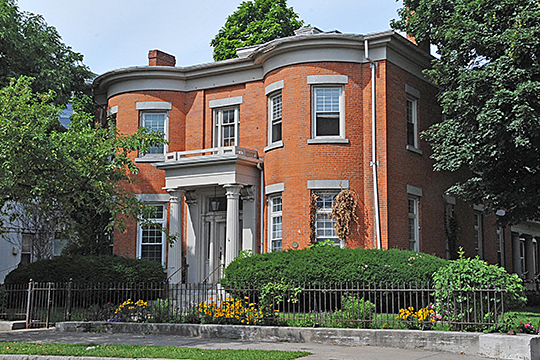 The Third Ward Historic District was listed on the National Register of Historic Places in 1974 [‡].

Cut off from the commercial, financial and governmental center at Rochester by Interstate Highway 490, the Third Ward Historic District is an architecturally solid residential area of about seven blocks tucked in the inner corner of the southwest quadrant of the city.

Approximately 126 structures are included in the Third Ward Historic District as well as ten vacant lots. There are only three instances of mid-twentieth century construction in the Third Ward Historic District. The rest of the buildings are residences, mostly brick varying in scale and style from heavy-set Greek Revival "temples" to flamboyant late Victorian villas intermingled with several early twentieth century apartment buildings.

In general, larger lots and thus the larger and more imposing residences are located on S. Plymouth, Troup, and Fitzhugh Streets, but there is no clear chronological pattern or growth throughout the Third Ward Historic District. Randomly located throughout the Third Ward Historic District, the earliest houses have varying degrees of Greek detailing. Most notable are the two porticoed giants, the Campbell Whittlesey House at 123 Fitzhugh Street and the Hervey Ely House at 138 Troup Street (both of which are listed individually on the National Register) and the bow-fronted Amon Bronson House at 263 S. Plymouth Avenue a type rarely seen in western New York. Smaller but still dignified houses of this period include #105 S. Plymouth, #217-19 Washington, #15, #17, #21 Atkinson and #133 Fitzhugh. Most of these are brick houses, three bays wide with an off center doorway, simple wide cornices often with vents, and the ridge of the gable roof runs parallel with the front property line.

A later version of this two story, three bay wide brick house was built gable end to the street including #9 and #15 Greenwood, #67, #69-71 Atkinson Streets. The introduction of brackets on this basic house type in the cases of #114 Eagle, #53 Atkinson, #6 and #11 Greenwood and #11 Troup Street bridges a mid-nineteenth century stylistic gap. Two other variants of this type are #249 S. Plymouth Street and #138 Fitzhugh Street which has an elaborate cast iron porch on the front facade.

Since 1966 the Third Ward Historic District has been an Urban Renewal Project area, and almost 2/3 of the buildings have undergone some degree of rehabilitation by private citizens or public agencies. While street improvements have been made by the city with the installation of new street lamps and the planting of trees, the residential flavor of the neighborhood has been reinforced by the Urban Renewal plan which permits no retail, wholesale, commercial or industrial uses within the area.

The Third Ward Historic District contains the architectural framework and neighborhood ambience of a well-known enclave of Victorian Rochester. This seven block area of over 100 buildings is sprinkled with outstanding individual landmarks; but even more significant as a whole, it is a graphic visual record of an important chapter in Rochester's social history.

For over fifty years, roughly between 1830 and 1880, the Third Ward was the city's choicest residential district. The Erie Canal, which followed the present day route of Broad Street, separated this neighborhood from the business district. Third Ward houses were built on a tract which sloped gently toward the river, affording good drainage as well as an ample supply of subsoil water for wells. The builders and homeowners of Third Ward Houses reflect Rochester's mid-nineteenth century economic base.

Hervey Ely was a prosperous miller, and his house at 138 Troup Street, one of the first in the Third Ward Historic District, was built in 1828 early in Rochester's booming flour milling period. The Ely House is said to have been designed by an architect named Hastings, and is cited by Talbot Hamlin in Greek Revival Architecture in America as "an interesting variation of the temple house with wings which is "obviously the work of a skilled designer."[1]

Another miller, Benjamin Campbell, rivalled his neighbor Ely with another elegant Greek Revival house at 123 Fitzhugh Street (the Campbell-Whittlesey House). Hamlin notes this house is "Lafever-like in spirit" with details matching almost line for line designs in Lafever's The Beauties of Modern Architecture (1835) published just after the accepted date for the construction of the house.[2]

The bow-fronted #263 South Plymouth Avenue was built in 1844, for Amon Bronson, a lumber merchant, the director of two railroads and a prominent Democrat before the Civil War who turned Republican afterwards. Another lumber-merchant, Emmet Hollister, lived at 207-11 South Plymouth Avenue which he had built in 1863-4. In the 1850's one of Rochester's mayors, Charles J. Hayden, had built #144 Fitzhugh Street, a solid, square brick house with a cupola and porch columns on foliated bases similar to those of the Brewster Burke House. At #15 Atkinson Street a lawyer member of Rochester's Eastman family lived in the 1850's, and next door to him #17 Atkinson Street was built for the parents of a wealthy St. Louis fur trader named Henry Shaw. Shaw brought them from England to their new home in Rochester in 1837. One local architect is known to have lived in the Third Ward, Isaac Loomis, who built #42 Atkinson Street for himself in the late 1860's and trimmed it with fanciful Gothic woodwork. The heads of other Third Ward Historic District households are listed as shoe manufacturers, painters, ministers, doctors, lawyers, undertakers and insurance agents, contributing not only to the neighborhood itself, but to the general growth of nineteenth century Rochester.

In addition the Third Ward Historic District was the back drop for a number of personalities whose lives had broader ramifications than merely the city of Rochester or even the State. George Decker, a nationally known authority on Indian rights and treaties bought #17 Atkinson Street in 1898 and later in 1921 #249 South Plymouth Avenue. #133 Fitzhugh Street, a well-proportioned Greek Revival house has had a succession of prominent owners. It was built in 1840 for David Hoyt, a business-man who organized the American Express Company. Ten years later Hoyt sold the house to Henry Potter who founded the New York and Mississippi Printing Telegraph Company[3] which later became the Western Union Company. Potter's descendents lived in the house until 1902.

Finally of all Third Ward Historic District dwellers none could rival the young Leonard Jerome at the onset of his career as an international gambler, investor, playboy, racehorse owner, father of the stunning Jennie Jerome and maternal grandfather of Winston Churchill. As a young man Leonard and his older brother Lawrence worked in the law office of their uncle, Hiram Jerome first in Palmyra and then in Rochester. During their Rochester years in the 1840's the Jerome brothers were remembered as "screamingly funny boys...very popular with the ladies owing to the dashing manner in which they rode high-spirited horses."[4] Around 1844 Lawrence Jerome married Catherine Hall of Palmyra, and five years later Leonard married her sister Clara. Ralph Martin in his biography of Leonard's daughter Jennie write of the Jerome brothers in Rochester:

"They lived in the fashionable Third Ward, 'the ruffled shirt Ward' separated from the business district by the Erie Canal. Houses there were large, postcolonial homes, some with pretentious facades of Greek Revival Architecture, and most fitted with the newest convenience, the Bates Patent Chamber Shower Bath."[5]

In 1845-6 Lawrence and Catherine Jerome took Leonard as a boarder in their house at #217-19 South Plymouth Avenue, and later the two Jerome bothers are said to have bought houses alongside each other and built a connecting passageway between them. Leonard Jerome bought the Rochester Daily American, became involved in Whig politics and was offered an appointment as Consul to Ravenna. He turned this opportunity down to allow for his increasing role in a telegraph line company in New York, and in 1850 he sold his interest in the newspaper and moved with his wife to Brooklyn to be nearer his new business. His daughter, Jennie, the future Lady Randolph Churchill, was born there four years later.

In recent history, the vitality of the Third Ward at its height between 1820 and 1880 came dangerously close to obliteration due to a period of cancerous decay in the first half of the twentieth century. The Third Ward Historic District's rejuvenation has been largely successful because of the formation of the Genesee Landmarks Foundation which bought, rehabilitated, and sold demonstration houses in the area thereby sparking a renewal interest in private rehabilitation. Thus the architectural and atmospheric quality of a vibrant multi-income neighborhood are still alive in the Third Ward Historic District today.

Files of the Landmark Society of Western New York.