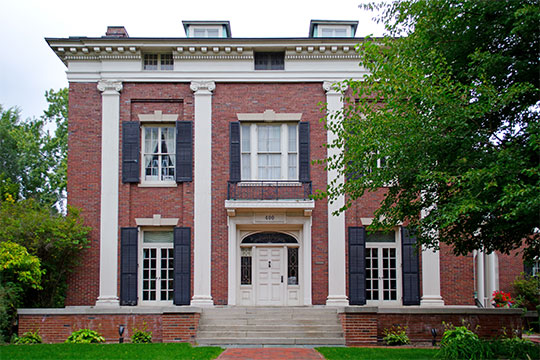 The East Avenue Historic District was listed on the National Register of Historic Places in 1979. Portions of the content on this web page were adapted from a copy of the original nomination document. [‡]

The boundaries of East Avenue Historic District conform with the district which the City of Rochester designated in 1969. East Avenue is the center of the District.

Within the East Avenue Historic District are examples of every major style of domestic architecture, beginning with Greek Revival town houses of the 1840's, up to and including dwellings and other buildings of the 1950's and 1960's in the "new formalism." Many of the original mid-nineteenth century estates, originally extending from East Avenue to Park and University Avenues, have been subdivided or used as sites for later construction. Several of the later nineteenth century residences have been replaced, at the turn of the century, by homes in the revival or eclectic styles popular in those decades. Several well-known architects have designed homes in the East Avenue Historic District, such as Frank Lloyd Wright and the firm of McKim, Mead, and White, as well as locally prominent Claude Bragdon and Leon Stern. The majority of the buildings are constructed of brick, but some are of stone or wood.

East Avenue has also been a popular location for churches. Christ Church, an 1855 structure, was remodeled in the 1890's into the Gothic mode. The Third Presbyterian Church, built in the Romanesque style and dedicated in 1893, is a stone edifice complete with a 140-foot high tower. Many residences have been adapted for use by religious organizations or by educational, community and social welfare institutions. Other mansions, during and following the 1930's, have been converted to multiple dwelling purposes. Moreover, some older homes have been replaced by garden apartments and high-rise buildings.

The Sibley House, 400 East Avenue (1868) — A classical revival structure, it was the home of Hiram Sibley, the founder and President of Western Union. At the time Sibley built this brick house, he was reported to have been the wealthiest man in Rochester. The two-story structure is covered with a hipped roof.

The Pitkin-Powers House, 474 East Avenue (1840) — A rectangular Greek Revival structure was built by William Pitkin, an early merchant and druggist. It was later owned by Daniel Powers, a prominent banker, investor and art collector. The third-story was added in 1900. It is now the headquarters for the Otietiana Council, Boy Scouts of America.

Woodside, 485 East Avenue (1839-41) — Woodside faces the Pitkin-Powers House but is a more harmoniously designed example of the Greek Revival townhouse. Built for Silas O. Smith, a prosperous early settler, the house, with its broad front, Doric entrance, classical balustrades and round cupola shows the influence of New England examples of this style. A number of prominent local families owned Woodside until 1941 when it became the headquarters for the Rochester Historical Society.

Bissell House, 666 East Avenue (1852-54) — This is a two-story brownstone built by Josiah W. Bissell, a contractor, from remains salvaged from the first Erie Canal aqueduct crossing the Genesee River. With its peaked roofs and large windows it resembles models in Downing's Country Houses. Bissell landscaped the spacious grounds with elms and other trees and planted for some distance along East Avenue a double row of horse-chestnuts. Once the home of Vice President Schuyler Colfax, in the 1950's it became the Methodist Home for the Aged.

Eastman House, 900 East Avenue (1900) — Amongst the largest of all the homes on East Avenue and one of the greatest of all western New York mansions, the Eastman House was built for George Eastman, the founder of Kodak, by J. Foster Warner, a noted Rochester architect, in consultation with the nationally famous firm of McKim, Mead, and White. The forty-two room Greek-Colonial Revival home gives a central focus and a sense of grandeur to East Avenue. To the rear of the mansion are greenhouses and a miniature farm. It is now administered as a photographic museum, George Eastman House, Inc. and has been designated as a National Historic Landmark.

Bates House, 1399 East Avenue (1856) — A stucco home with a square tower in front and low pitched roof lines, the Bates House is an excellent example of an Italianate Villa. When Thomas Leighton acquired it in the 1870's, he added a wing to make it the largest mansion on the avenue. In spite of a fire that recently severely damaged the interior, it remains as a residence for one of the few old families still occupying East Avenue mansions.

Boynton House, 16 East Boulevard (1909) — The Boynton House is one of the notable dwellings on a cross street and is Rochester's only work by Frank Lloyd Wright. With its low roof lines, wide projections over rows of windows, and emphasis on horizontal elements, it is a significant example of Wright's "Prairie Style."

Culver House, 70 East Boulevard (1805-16) — The Culver House originally consisted of a small rear portion built in 1805 and a main portion that dates from 1816. The Federal style frame house was moved two blocks in 1906 to its present location, on property that had been a part of the original Culver estate. In the move, the small original portion was destroyed. The building's entranceway is considered to be one of the best examples of post-colonial architecture in the Genesee Valley. This is the only structure in the East Avenue Historic District known to have been moved.

Cited as one of the greatest catalogues of nineteenth and early twentieth century urban residential architecture in New York State, Rochester's mile-and-a-half long East Avenue Historic District is lined with an extraordinarily consistent array of elegant buildings. Unlike Buffalo's Delaware Avenue and Syracuse's James Street which have lost their rhythm and integrity as a result of mid-twentieth century commercial intrusions, the East Avenue Historic District still retains much of its original character as the "grand boulevard" of Rochester, despite the adaption of many of its original residences to clubs, museums and offices. The side streets surrounding East Avenue reflect the grandeur of the Avenue on a smaller scale, as evident in the reduction in building size, architectural pretension and street width.

The East Avenue Historic District which originally began as a thoroughfare to the east is one of two areas in Rochester which became the most prestigious residential areas of the rapidly growing city. Here were located, following the 1830's and for another century, the homes and estates of the wealthy, prominent business leaders and professional people of Rochester. Because of its spacious grounds and stately homes, the tree-shaded thoroughfare has been regarded by many as Rochester's most beautiful street.

The permanent settlement of Rochester began in 1812 on a 100-acre tract located at the upper falls of the Genesee River. In the early 1820's, the small town experienced an economic boom as a result of the construction of the Erie Canal, and by 1834 the city was incorporated. The new city was surrounded by three falls from the Genesee River, and the ample water power encouraged the development of lumber and grist mills. Farmers from the Genesee Valley shipped grain to the mills in such vast quantities that Rochester became known as the "Flour City." Although competition from other sections of the state and the country ended Rochester's dominance as a milling center by the mid-nineteenth century, the Civil War stimulated the manufacturing and processing of shoes, clothing, and food which became an important part of the city's economy.

The Third Ward Historic District, the original residential area for the city's elite, filled to capacity by the 1860's. Millers, bankers and corporation executives seeking locations providing more spacious surroundings made East Avenue the address. There they erected imposing mansions in landscaped settings with greenhouses, carriage houses, stables and other outbuildings. The continuation of East Avenue's high property values was assured by the move in 1861 of the University of Rochester to nearby University Avenue. This relocation also stimulated the development of new cross streets between University and Park Avenues. These high-priced locations attracted affluent residents, but few of these streets rivaled East Avenue in its elegance.

In 1895, "when George Eastman became fabulously wealthy, he and McKim, Mead and White built him a house..."[1] Eastman's move from Arnold Park to 900 East Avenue also insured the continued development of the East Avenue Historic District. Designed by J. Foster Warner, in consultation with the well known New York architectural firm, the Eastman house was accompanied "up and down East Avenue on either side...[by] other houses built by Kodak profits, by profits of the Bausch and Lomb Optical Company, by profits from Hickey-Freeman, Adler Brothers, Sten-Bloch, Society Brand coats and suits, from Sibley Lindsay and Curr's Department Store.[2]

Mansion construction continued into the twentieth century, but the turning point in the history of East Avenue was approaching. One influence was the replacement of carriages with automobiles, and the appearance of traffic jams in the 1920's along the avenue. In that decade, also, the descendants of several mansion owners moved into new dwellings in the suburbs of Rochester. Even before the impact of the Depression of the 1930's, major changes were beginning to affect the character of the East Avenue Historic District.

The economic collapse of the 1930's forced the abandonment of many palatial dwellings. Their deterioration encouraged the purchase of the property for new construction, multiple dwellings, or even business purposes. As pressures intensified during the 1940's and the 1950's, only a small portion of the mansions along East Avenue continued as single family homes. Schools, religious societies, business organizations and new housing all altered the use of East Avenue.

By 1937 community leaders and local architects became alarmed over the future of the neighborhood and its environment. The Landmark Society of Western New York organized the same year and headed the campaign to preserve East Avenue and to limit future changes. In 1969, the city enacted local legislation to protect the East Avenue Historic District from incompatible development.

Files of the Landmark Society of Western New York.