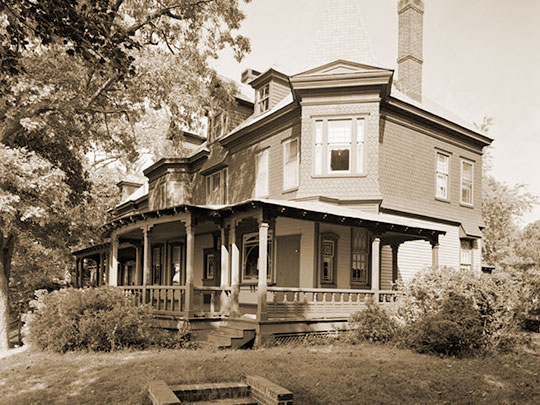 The Island Heights Historic District was listed on the National Register of Historic Places in 1982. Portions of the content on this web page were adapted from a copy of the original nomination document. [‡] .

Island Heights is the most intact example of a planned Victorian religious resort in Ocean County and one of the best-preserved in the state. Although late, the founding of Island Heights is reflective of the continuing Methodist revival of the late Victorian period. With the extension of the Pennsylvania Railroad's Camden to Seaside Park line to Island Heights in 1883, the new middle class from central and western New Jersey and Philadelphia was offered easy access to this Christian family resort, and to oceanside towns throughout the county, giving birth to its tourism industry. The Island Heights Historic District's riverfront, as compared to oceanside, out-of-the-way location and late 19th century construction boom left neither room nor cause for new development. There remains a dense concentration of well-preserved, vernacular, Queen Anne houses displaying their original picturesque massing and detailing. The rare occurrence of intrusions allows Island Heights to retain the scale and ambiance of a late 19th century resort town, and the remaining camp meeting grounds and camp houses reflect its religious origins.

Island Heights was once known as Dr. Johnston's Island, following his receipt of a patent grant in 1680. In 1748, it was surveyed as Toms River Island and although that survey shows no through northern waterway, Edwin Salter claimed the area was an island and that vessels once sailed through such a channel. Today the majority of the "channel," now called Dillon's Creek, is swampy marshland.

In 1762, the land became Dillon's Island when it was turned over to the Dillon family, British sympathizers whose son William led the Tory attack on the Toms River Blockade in 1782. The Dillons resided on the "island," living in a house still standing although altered (outside the district) on East End Avenue. In 1853, Commodore Robert F. Stockton of Princeton purchased the land for a summer house but was prevented from building by local hostility to his political viewpoints. Ownership changed through the years until the 320 acres became three tracts of land: the Brinleys owned the northern acreage and are said to have built the house at 103 Oak Avenue after 1864; the Westrays owned the southeastern portion, and James Robinson owned Hurry Farm in the northeastern section.

In 1877, the Rev. Jacob Graw, presiding elder of the New Brunswick District of the Methodist Church, looked over from the southern shore of the Toms River and, impressed by the picturesque beauty of the bluffs on the opposite side of the stream, decided it would be a good location for a camp meeting and summer resort. He spared no time in enlisting the help of twelve additional ministers, all members of the New Jersey Conference of the Methodist Episcopal Church, and seventeen prominent businessmen, the majority of whom were also members of the Methodist Church from Philadelphia, Camden, Mount Holly, Trenton, and Toms River. On July 1, 1878, all became incorporators of the Island Heights Association, a Methodist organization designed and pledged to hold camp meetings. Dr. Graw's motives in founding Island Heights are well expressed in his son's words: "Dr. Graw did not undertake to establish a second Ocean Grove [see Ocean Grove Camp Meeting Association District]. That was impossible then and now. But he did undertake to build up a Christian family resort under temperance influences with the camp meeting as a special feature." Dr. Graw was an indefatigable advocate of temperance, holding annual temperance meetings for a week after the camp meetings, and editing the Temperance Gazette, a widely circulated weekly paper. To this day the sale of alcohol is forbidden in the borough and within 1-1/2 miles of the camp ground, a practice not uncommon in other towns founded by Methodists.

The Island Heights Association purchased 154 acres of land from the Brinleys and 18 acres from the Westray estate with their capital of $9,000. They immediately staked out a 10-acre plot atop the bluffs for the camp meeting grounds and began the work of clearing the area and opening two roads to it. An enormous amount of building and organization occurred in six weeks, but the first camp meeting services were held as planned on August 13, 1878, under the direction of Rev. Samuel Van Sant, presiding elder of the district, and Rev. W.C. Stockton, Conference Evangelist. Some 1,500 people came by horse and buggy and chartered boats the first year, and in later years an attendance in excess of 2,000 was reported.

It was the Island Heights Association which kept the camp meeting grounds, constructed the roads, ditches, wells, and docks, cleared land, built the auditorium and benches for the meeting grounds, built the trestle so the railroad would connect its lines, and built the first Methodist Episcopal Church in 1882. "To raise money, the Association divided land, except the Camp Meeting Circle, into sections and sold the same to stockholders who paid premiums for the choice of location and an equal assessment for the balance of the debt." There were several public auctions held to sell the lots after the camp meetings each year, and a sale in 1879 included the sale of camp meeting cottages. Later the Island Heights Camp Meeting Association was formed strictly to oversee the camp grounds when the Island Heights Association and the Methodist Episcopal Church were unable to assume care. Both associations exist today independent of the Borough government.

In 1900, John Wanamaker came to Island Heights to open a camp, "the Barracks," for children attending the John Wanamaker Commercial Institutes in Philadelphia and New York. A paternal employer, Wanamaker was adamant about well-rounded education for his employees. "Thinking, trying, toiling and trusting God, is all of my biography," he wrote once in response to a request for a sketch of his life, and so in finding Island Heights religiously oriented, easily accessible by rail from both stores, and with the availability of land for camping and marching, he established his quasi-military encampment in the northeastern corner of the Borough. The young employees came in weekly shifts until child labor was deemed unlawful in 1941. People came from miles around to watch the drilling and hear the Drum and Bugle Corps and the Military Band. The students were drilled like a National Guard camp, but with time for field sports and swimming. In later years, full companies from Wanamaker's went on to fight in foreign wars, and a granite statue on the Borough grounds stands as a tribute to their participation at Verdun.

Island Heights is part of an important urban based movement that combined religious fervor with the benefits of industrialization: increased disposable income and leisure time. Although somewhat later in developing, Island Heights is similar in its religious origins to Ocean Grove (NJ), Oak Bluffs (MA), and Sea Grove (NJ) (Cape May). It is also like those towns in its focal points of plan, its architecture, and in the fact that the commercial real estate aspects of its growth overpowered the religious emphasis until today the area's largely resort and recreation oriented because of the late 19th century ambiance that all still retain.

As the middle class grew, so did the miles of railroad lines. Year after year the lines moved south from New York and east from Philadelphia, allowing easy access to vacation spots. People were able to break away from their conventional working environments and seek relaxing, healthful, and picturesque locations, removed physically and visually from their urban daily existence. They sought the recreation of the ocean and riverfronts and often discovered entertainment in other peoples' occupations, as was the case with boating and its new recreational facet. What had been primarily an economic activity, used for fishing and transportation, quickly became a recreational pursuit. Numerous yacht clubs sprang up on the shores (in New Jersey and elsewhere), and yacht racing became the gentlemen's sport. They sought entertainment and distractions for their leisure time, whether camp meetings or boardwalk arcades, and they came to Island Heights and other towns in Ocean County setting the seeds for the huge resort industry which thrives there today.

Island Heights remains an intact and well-preserved dense concentration of Victorian vernacular cottages. There are not mansions or estates as in Newport (RI), but there is a wealth of late 19th century, middle class, resort housing, creating streetscapes only seen near the ocean. Wood shingle, board-and-batten and clapboard are the primary wall materials often combined for the ultimate in picturesque romanticism. Styles represented pastoral fantasy forms evoking the diametrical opposite of the urban industrialized areas that vacationers were seeking to leave behind. It is, of course, highly ironic that it was technology itself — primarily in construction and transportation — whose advances made possible the Victorian resorts as we know them.

Architecturally, several Philadelphia architects are represented in Island Heights. Charles Z. Klauder, of Day and Klauder, was responsible for designing at least two homes in the Island Heights Historic District, one for his good friend Edwin J. Schoettle of Philadelphia. Henry Pettit, main engineer and architect of the Main Building and Machinery Hall as Head of the Bureau of Installation at the Centennial Exhibition in Philadelphia, built the Arbutus Lodge on River Avenue for himself and designed the magnificent high Victorian McKeehan/English House on Ocean Avenue. The detailing of the Milne and Pinkstone Queen Anne houses on River and Simpson Avenues suggests Pettit's hand in their designs too. Louis Duhring, a Philadelphia architect, spent many summers in Island Heights and local tradition cites him as the designer of the Colonial Revival style house at 169 Ocean Avenue. The house was reputedly built for the Moore family; Mr. Moore was the City Planner in Philadelphia and an in-law of Duhring's.

There are a number of noted artists and artisans associated with the district. John Frederick Peto, famed American still life painter, built his house and studio here with its picturesque massing, vibrant color and interesting detail of sea shells in its gable end; a truly Victorian ideal that links ornament with place. Howard Keyser of 112 Camp Walk West of Keyser Brothers Iron Works in Philadelphia designed the high altar gates at the National Cathedral in Washington, DC as well as numerous ecclesiastical works throughout the Philadelphia area. Betsy Pease Guttman, Frederick Wagner, Franklin Dullin Brisco, F. Button Skill, John English and G.T. Hobbs are just some of the artistic personalities who resided in Island Heights over the past century.

Part of the key to Island Heights' remarkable survival is its location. As at the time of its founding, it is an extremely attractive area due to its terrain and proximity to the river; but, because there is no ocean front, and it is not directly on any of the main roads to the beaches, it has been spared the onslaught of the automobile age. Route 37, which is just such a road, passes through the extreme northern part of the Borough (safely away from the district), providing the usual strip services such as fast food and gasoline. Because of this proximity, and the lack of traffic through the district to support such enterprises, they do not exist within it. All commercial activity in the Island Heights Historic District is contained in a one-block section of Central Avenue.

Another (and possibly most important) factor in the Island Heights Historic District's present state is the population. Originally only seasonal, it has become more and more full-time, and it is apparent from the general care taken of the structures that property owners generally appreciate the Victorian quality of the town. While it would be an overstatement to say that the citizens are all preservation-oriented, it is a safe assumption that a great many are concerned with the survival of the built environment, whether their own buildings or the townscape as a whole.

Daye, June. The Mecca of the Methodists; The Story of the Founding of Island Heights, Ocean County Bureau of Publicity, 1941.