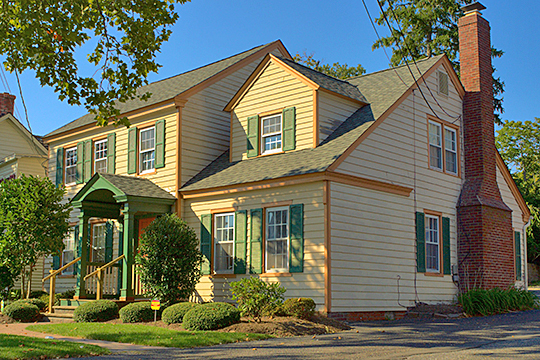 When Ocean County was established in 1850, Dover Township was chosen as the county seat. In 2006 the name of former Dover Township was officially changed to Toms River Township resolving long-standing confusion about names in the area. Parts of the township's boundaries are shared by 11 separate municipalities. Toms River once flourished as a seaport as well as a County Seat.

Toms River, county seat of Ocean County, is an attractive fishing community on the northern banks of Toms River, a waterway discovered in 1673 by the surveyor, Captain William Tom. The town is widely known for its excellent clam chowder, always served with ship's biscuit.

During the Revolution the settlement was a starting point for patriots' raids and its residents were described by the British as "a piratical set of banditti." On March 24, 2782, a band of Tories led by British officers attached the crude blockhouse, built on a knoll, approximately where the county courthouse stands today. Captain Joshua Huddy, active in ridding Monmouth County of Tory refugees, was in command of the stockade with a few militiamen. Outnumbered and with ammunition spent, Huddy was forced to surrender. Without a trial, he was brought to Water Witch and hanged in retaliation for the killing of a Loyalist prisoner by patriots. The British burned the town after the attack. It became the county seat when it was later rebuilt.

The vanished Toms River salt works, most important of many plants along the New Jersey shore, were built in 1776 when the supply from England was cut off. Salt water was evaporated and the thick residue strained and spread out to dry.