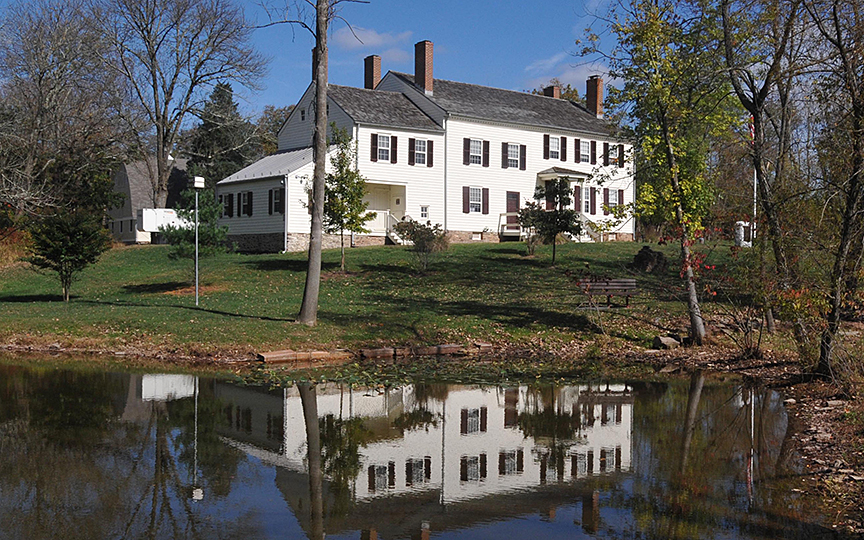 On March 30, 1688, Adlord Bowde, acting as agent for "Daniell Coxe Esqre., Governor & Chiefe Proprietor" of West Jersey, acquired from 11 Indians their rights to a tract of land that included all of what later became known as Hopewell. In 1689, the property acquired from the Indians in the previous year was formally surveyed for Coxe, establishing his ownership of the tract of land on the Delaware that was estimated (incorrectly) to include 28,000 acres. This survey created several boundary lines that remain today as boundaries of Hopewell Township. The tract's east line was described in 1689 as being the same as the Maidenhead line (the present boundary with Lawrence Township) and the Scotch line (or Province Line, laid out in 1687 to divide East and West Jersey, the current boundary with Princeton and Montgomery Townships). The Coxe tract's distinctive northern boundary survives as the present line with East and West Amwell Townships.

By the end of the seventeenth century, the 30,000 acre Coxe tract was sufficiently populated to warrant the establishment of Hopewell Township as a municipal entity within Burlington County. The new Township, as created by the Burlington County Court in 1699-1700, included within its bounds all of present day Hopewell Township, Hopewell and Pennington boroughs, most of Ewing Township, and much of the City of Trenton north of Assunpink Creek.

The in-migration of European settlers that began in the 1690s continued at a rapid rate through the first two decades of the eighteenth century. Virtually all who arrived during this period were farmers seeking agricultural lands no longer available in the region's older settlement areas. The settlement pattern that developed was one of dispersed farmsteads with individual settlers and their dependents living in relative isolation from their neighbors. The emergence of the dispersed settlement pattern — rather than the New England pattern of clusters of housing surrounded by farm fields — resulted from various factors, including the desire to live close to one's land and the absence of any substantial Indian threat. Hopewell Township's isolated farmsteads were linked by a network of primitive roads, many of which followed former Indian trails. During the early settlement period, these roads, along with the Delaware River, were the principal means of transportation and communication among the farmsteads and between the Hopewell area and the other settlements in the region.

Population expansion prompted both county and municipal changes, and in 1713-14, the portion of Burlington County north of the Assunpink (including Hopewell Township) was set off and established as Hunterdon County. In 1719, Hopewell Township was reduced in size by the creation of Trenton Township (now Ewing Township and the northern half of Trenton). This division produced the present southern boundary of Hopewell Township, and the Township assumed its boundaries that remain today.

During the Colonial period, Hopewell Township remained an agricultural region. It continued to be dominated by the dispersed settlement pattern that had characterized the previous three decades. Population growth, however, produced an increased demand for farmland. This eventually caused the large farms to be subdivided. These subdivisions produced a larger number of farms of reduced size, while the movement onto marginal agricultural land involved a simple extension of the dispersed settlement pattern to areas that had previously been ignored.