Photo: View from Lincoln Park towards brownstones and mansions., Lincoln Park Historic District, Newark, NJ. The Historic District was listed on the National Register of Historic Places in 19834. Photographed by User:2014 (own work), 2012, [cc-by-3.0 (creativecommons.org/licenses/by/3.0)], via Wikimedia Commons, accessed July, 2015. 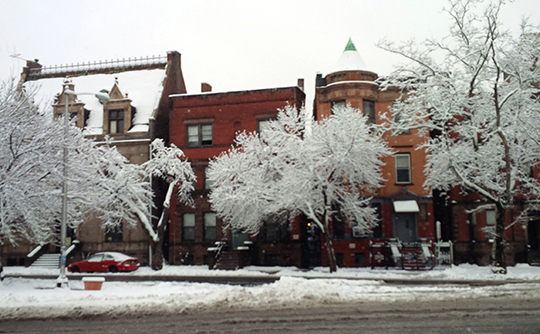 The Lincoln Park Historic District [‡] was listed on the National Register of Historic Places in 1984.

The Lincoln Park Historic District, enhanced by its park-like setting, contains the finest collection of late nineteenth century and early twentieth century urban town-house architecture in Essex County. The parks and statues retain their original quality and contribute to the surrounding buildings.

Although there are isolated high-style residences still extant in the city, nowhere is there a more intact nineteenth century vista reflecting social and economic prominence than this prestigious area. The leaders of Newark business and industry who lived here in the nineteenth century and the doctors who replaced them in the thirties gave identity to the area.

Because of continued and renewed interest, the District has been revived by the recent rehabilitation efforts of individual property owners and community groups. Lincoln Park survives today; a unique example of Newark's historic past.

In the middle of the 1880s Newark had emerged as important industrial center. It was at this time when successful business and professional men first came to live in the Lincoln Park District. The neighborhood was much larger than it is today and stretched north and south to include many buildings on Broad Street and the site of the present Symphony Hall.

The manufacture of leather goods was a leading industry in Newark. Two famous bootmakers Isaac Bannister and John S. Peshin came to live in the Lincoln Park District in the mid-1800s, their homes on Broad Street, the east side of the park are no longer extant. The making of jewelry was also important in Newark. David Dodd, one of the more prominent of the jewelry manufacturers, lived at 19 Lincoln Park in the late 1800s.

By the turn of the century the park district had become firmly established as one of the places for prominent leaders of industrial Newark to live. The area was convenient to the Central Business District. These affluent men could easily walk to their downtown offices while their employees often commuted from the more distant Vailsburg and Roseland. The famous brewers, Christian Feigenspan, who lived at 51-53 Lincoln Park, and Gottfried Kruger, 73 Lincoln Park, members of the McCarter Family, the Drydens of the Prudential Insurance Company, and others who lived in Lincoln Park left their special mark on the neighborhood. The need to be in fashion, to express wealth and achievement is reflected in the individual style and splendor of their townhouses. Christian Feigenspan, who donated the "Equestrian Statue" to Clinton Park in 1912, left a monument to commemorate his love and pride in the area. Newark was important to these men of commerce. The city had given them opportunity and wealth. Their fine houses remain as a legacy of gratitude and affection.

The social and economic changes that took place in Newark in the 1920's had considerable effect on the buildings and people in Lincoln Park. With the construction of the "Medical Towers" (31-33 Lincoln Park) in 1927 a shift of focus had been established. No longer an upper-class residential neighborhood, Lincoln Park had become an area of medical/social services, offices, and apartment buildings. Well-known doctors and dentists rented space in the park mansions. Henry H. Kessler, the internationally-known orthopedist and founder of the Kessler Institute for Rehabilitation bought the Feigenspan house (49 Lincoln Park) for his residence and worked in the area for almost 36 years. The presence of Dr. Kessler and other prominent doctors contributed to the reputation of the neighborhood as a mini-medical center in the forties and fifties. The New Jersey Academy of Medicine (89 Lincoln Park) which was established on the park since 1919, served as a meeting place for the doctors. Important speakers came to monthly seminars held at the Academy buildings and larger symposiums took place at the Essex House on Broad Street.[1]

Besides the medical profession, fashionable dressmakers chose to live on the park at this time. The most important of these was Dorothy Ball who operated a successful business out of the former Charles Kase house, 103 Lincoln Park, until the late sixties. Another well known dressmaker lived at 68-70 Clinton Avenue.

Social clubs like the Globe Trotters, established in the Dryden Mansion (59 Lincoln Park) in the sixties catered to the needs of the new residents who were now living in the area.

These social and architectural changes are significant in the history of Lincoln Park. They may have altered its character but they held the neighborhood fabric together and contributed to its economic and architectural survival.

The stability brought about by the medical services of the twenties was not to last forever. In 1948 the New Jersey Academy of Medicine moved to new quarters in Bloomfield.[2] Medical services now centered around the huge Newark hospitals: University College, Beth Israel, and St. Mary's. With the shift of local population to the suburbs in the fifties, doctors moved from the Medical Towers and the houses around the park. Some of the larger public buildings on Broad Street became vacant in the sixties and the general deterioration of Newark started to affect Lincoln Park. Many of the houses became vacant and vandalism increased. In the late sixties when the area had reached its lowest ebb a number of community groups purchased and rehabilitated properties around the park. The most influential of these were two drug rehabilitation centers, Integrity House and CURA. In 1968 a private institution (Chad School) bought a group of homes on Clinton Avenue (76, 78, 80, 82, 84, 86, and 88 Clinton Avenue) adding stability to the southwest corner of the Lincoln Park Historic District. The Newark Community Center for the Arts purchased 896 Lincoln Park and the two adjoining empty lots in 1971. Additions, were made to the early structure and the building remodeled.[3]

If some of the architectural integrity was lost in the rehabilitation process, the building is economically viable and deterioration has been halted on the southeast corner of Pennsylvania Avenue and the park.

These community groups have provided the stabilizing forces needed in the area and encouraged private rehabilitation of the surrounding buildings. Some of the organizations worked with local preservation groups to prevent demolition of early park structures.[4] These efforts have encouraged developers to invest in the area and recycle the large twenties buildings to apartment use.[5]

Once again the focus of the neighborhood has changed, optimism prevails in the area and the integrity of Lincoln Park has been preserved.

The eclectic modes of the late nineteenth century are well represented in the Lincoln Park Historic District. There are some fine examples of Victorian Romanesque, and the Chateau style with its Tudor Renaissance elements is reflected in two of the most prominent contributing buildings, numbers 53 and 103 Lincoln Park. The vernacular house on Clinton Avenue show the same variety of styles as their more affluent neighbors, but with less complexity of detail (76 Clinton Avenue). Here Mansard roofs appear on earlier Italianate structures (84 Clinton Avenue) and conical turrets (78 Clinton Avenue) contrast sharply with the straight lines and materials of the twentieth century facades to the east (84, 86, 88 Clinton Avenue) . A wealth of ornament is present in the intricate Romanesque tracery and Eastlake elements that distinguish the Italianate brownstones on the north side of the park (17-19 Lincoln Park; 35-37 Lincoln Park; 45 Lincoln Park). Many of these homes were designed by well-known architects of the day and their interiors match the exteriors in taste and design.

Number 61-63 Lincoln Park on the northeast corner of Washington Street is one of the more unique of the older buildings in the Lincoln Park Historic District. A high-style Italianate residence, it shows an interesting use of a corner site. The structure makes a strong contrast to the classical lines of the Dryden-McCarter House to the east (59 Lincoln Park) which wasn't built until after the turn of the century.

A combination of late Romanesque revival and Sullivanesque detail makes the Medical Towers (31-33 Lincoln Park), designed by William Lehman in 1927, an exceptional building for its time; one that compliments rather than conflicts with the earlier structures. The lesser buildings of this period — the Colleoni (39-41 Lincoln Park), an apartment house at 35-37 Lincoln Park; 39-41 Lincoln Park; the Park Lane Hotel at 79-81 Lincoln Park; and the Industrial Office Building (1060 Broad Street) — are very typical of their day. They are not intrusive and harmonize with the older adjoining structures.

There are a few brownstone buildings in the park but brick, often with stone facing, is the most prominent material used. No expense was spared in the material and craftsmanship of these houses. A wealth of ornamentation is displayed in the decorative carving, fluted columns, incised keystones, pendants, and decorative arches.

Three important pieces of sculpture are located in Lincoln and Clinton Parks. The statues were given to Newark when the city was at the height of its economic prosperity. Two were memorials and the third given in a moment of generosity to increase Newark's store of artistic treasures. Now regarded as landmarks, these monuments contribute to the significance and historic character of the neighborhood: The Indian Group, An Historical Incident of November 1764; the Equestrian Statue of Bartholomeo Colleoni; Planting the Standard of Democracy sculpture.

Newark, N.J. Board of Education, Sculpture and Stone Carving in Newark, Leaflet No. 31, prepared by the Free Public Library, Newark, 1914.