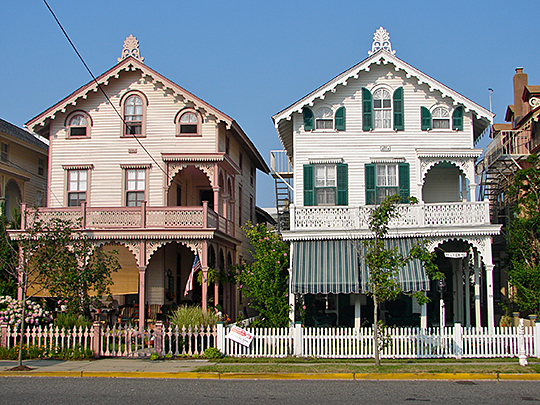 The Cape May Historic District was listed on the National Register of Historic Places in 1970 and designated a National Historic Landmark District in 1976. Portions of the content on this web page were adapted from copies of the original nomination documents. [‡, ‡] .

Cape May has one of the largest collections of late 19th century frame buildings left in the United States. It contains over 600 summer houses, old hotels, and commercial structures that give it a homogeneous architectural character, a kind of textbook of vernacular American building.

A brief history of the City of Cape May indicates a substantial claim as the oldest Sea Shore resort in America. Long before the first Europeans explored the coast of the New World, Cape May County was inhabited by a branch of the Lenni-Lenape tribe of Indians (the Kechemeche) who found the climate and wild life excellent. Cape May was actually discovered by Sir Henry Hudson on August 28, 1609. He entered Delaware Bay and landed a few miles north of Cape May Point.

Cape May was named for Cornelius Jacobson Mey, a Dutchman representing the Dutch West India Company. Mey explored this coast in 1621. Shortly after his visit, in May of 1630, Samuel Godyn and Samuel Blommaert representing the same company, made the first land purchase in the county. They bought from the Indians a tract 4 miles along the bay from Cape May Point northward and 12 miles inland. A New Netherlands colony was firmly established. In 1632 Davi Pieterson DeVries, an eminent seaman became the first resident patroon land owner in Cape May. He was to establish a fishing industry, particularly that of whaling. In 1638 English colonists from New England migrated to expand the whaling industry and Town Bank (or Cape May Town) was founded. The English assumed control of the area in the 1660's.

In 1687 Doctor Daniel Coxe of London, Quaker, began the organization of government and established headquarters at Town Bank on Coxehall Creek. He constructed a manor house called Coxe Hall which became a religious meeting house and town hall. In 1692 the West Jersey Society bought all of Dr. Coxe's holdings — 95,000 acres.

In the 18th century the whalers and farmers developed an economy based on the resources at hand and created the foundation for the flourishing sea-side resort that grew to international fame in the 19th century.

Cape May began to flourish as a resort after the War of 1812 when regular steamboat traffic on the Delaware River picked up passengers at New Castle, Delaware. (Southerners who had traveled North by the Frenchtown and New Castle Railroad.) In 1816, Thomas Hughes built the first Congress Hall Hotel at Cape Island.

In 1830 a contemporary writer comments: "Cape May Island is a noted and much frequented watering place, the season at which commences about the first of July and continues until the middle of August or the first of September. There are six boarding houses, three of which are very large; the sea bathing is convenient and excellent, the beach affords pleasant drives and there is excellent fishing in adjacent waters."

The famous and well-to-do became frequent visitors. Henry Clay arrived in August of 1847, and Abraham Lincoln in 1849, and the following while they served as President of the United States: Franklin Pierce in 1855; James Buchanan in 1858; Ulysses S. Grant in 1873; Chester A. Arthur in 1883, and Benjamin Harrison in 1889. At the peak of the summer season in the 1850's, as many as 3,000 visitors a day arrived by steamer and this influx continued through the 1880's.

Cape May enjoyed an international reputation as a spa from the mid-century until the early years of the 20th century when Atlantic City became more fashionable. The town was incorporated as a city in March of 1851, and the name was changed from Cape Island to Cape May City. Its only rivals in America were Newport, Rhode Island, Saratoga Springs, New York and Long Branch, New Jersey.

While Cape May flourished as a resort, famous for its atmosphere and entertainments, a number of famous hotels were constructed — in 1853, the Mount Vernon — then the largest hotel in the world. It burned in September 1856. The United States Hotel built in 1843, burned in the disastrous fire of 1867. Since many of these large summer "palaces" were timber, they were vulnerable to fire and the great 1867 fire leveled two city blocks.

In spite of the damaging fires, Cape May retains a very great number of the buildings of the second half of the 19th century. There is an almost complete showcase of late-Victorian architecture which should be preserved and restored. The so-called eclectic styles so fancied by a new rich America are all here. Most of these buildings were conceived and constructed by the individual carpenter-builder, using textbooks and trade journals. They improvised freely on what they thought were traditional styles — Greek Revival, Gothic, Queen Anne, Italianate, Elizabethan, Eastlake, Mansard, etc., but these borrowings were not historically accurate. Rather, these romantic statements were an architectural vernacular that produced the "Picturesque" style Americans held to be the height of fashion. Many of the buildings in Cape May must have been designed by creative local carpenters using the handbooks of construction that were standard reference. These "pattern books" included designs, costs of material, chatty advice on good taste and had some pretensions as to guides to culture. The parvenu client was anxious to display his wealth in the form of a fine house in the latest fashion. Cape May has a number of excellent examples of the elegant summer residence.

This community still maintains the nostalgia of past elegance and whimsical romance. The resort retains those qualities of an era most closely associated with Southern hospitality and charm, gracious living and a century that had supreme confidence in itself.

In the Cape May Historic District, there are also a number of significant structures of the first decade of the 20th century designed by distinguished architectural firms such as McKim, Mead and White, and the Philadelphia firm of Zanzinger, Medary and Borie. Earlier, some distinguished architects were at work Samuel Sloan, Stephen Decatur Button, and Frank Furness.

Hand, Matilda Butler. A Romance of Old Cape May. Philadelphia: Dorrance and Company, 1928.

Stevens, Lewis Townsend. The History of Cape May County. Cape May: Star and Wave Publishers, 1897.

Fitzpatrick, Helena Way. "Some Old Houses of Cape May County, New Jersey," printed by the Leader, 1951.

Fonzi, Gaeton. "My, What a Quaint Place." Philadelphia Magazine, August, 1967.