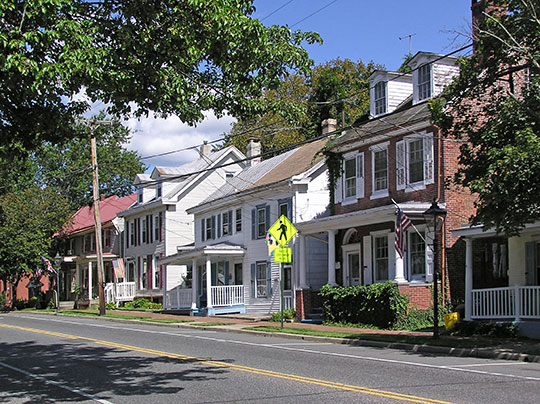 The Pemberton Historic District was listed on the National Register of Historic Places in 1989. Portions of the content on this web page were adapted from a copy of the original nomination document. [‡] .

The significance of Pemberton Borough is in part a direct result of its remarkably successful industrial development as the first "company town" in Burlington County, which provided its employees a comfortable place to live and work at the "New Mills Company." From its beginnings the town provided residents and nearby farmers with the grain, lumber, wool and iron implements for domestic, commercial and agricultural use, which resulted in a highly profitable and enterprising era of industrial growth for nearly three quarters of a century (1770-1840).

Located on the edge of the New Jersey Pine Barrens and connected by the Rancocas Creek, excellent roads and railroad lines, the Borough evolved into a major processing and distribution center for crops produced in the pinelands (berries and field crops) during the late 19th century and early 20th century.

In addition, the Borough is considered the cradle of the Baptist and Methodist faiths in Burlington County, since in contrast to other parts of the County, development was not guided by the Society of Friends (Quakers). The first churches of both denominations were built in the third quarter of the 18th century, though they have since been replaced with more substantial structures.

The Borough's exceptional buildings from various architectural periods reflect the rich history of industrial activities and prosperity of the 18th and 19th centuries, and the adaptation to processing the resources of the pinelands. It offers, today, a picture of the economic diversification of the Borough since its beginnings in the 18th century, within which the social, economic and religious needs of its residents and neighbors were accommodated.

The built environment of the Borough of Pemberton is best understood in the context of its early industrial growth, economic diversification and adaptation to processing and distribution of cranberries and field crops. Buildings and structures specifically associated with the industrialization of the Borough are, for the most part, missing from the remaining cultural landscape. However, the economic diversification of the Borough can still be seen in the storefronts along Hanover Street. In recent years, these storefronts have been closed up, altered and converted to residential uses.

The only surviving indication of the once thriving cranberry industry are the two packing houses extant on the south end of Hanover Street and on Pemberton Street. However, the large operation of berry processing and shipping behind the Budd House (119 Hanover Street) and the barrel factory, located at the south end of Hanover Street, have been destroyed. The remaining housing stock developed during the various eras of development ties together the Borough of Pemberton. As Pemberton adapted to the changing socio-economic pressures, its houses reflected the times, but also remained cohesive and vital as a grouping.

The general economic depression that swept Pemberton in the 1840's is characterized by a void or absence of houses that would have been influenced by the Classical Revival styles. Only the Baptist Church at 59 Hanover Street and the Baptist Sunday School (118 Hanover Street), exhibit traits of the Classical Revival style. In general, this popular method of building can only be seen in lesser architectural embellishments of Pemberton's houses, including porches, cornices and fenestration. It appears unlikely that many houses were originally built "from scratch" during the period from 1840 to 1860.

The post-Civil War era of building in the Borough adapted to a wide-range of architectural concepts in its residential construction, as evidenced by the houses built along Elizabeth Street. The settings for these houses generally include much wider lots, a wider spacing of houses and deeper setbacks. The plan and forms tended to be more rambling, irregular and picturesque. Influences of Andrew Jackson Downing (34 and 36 Elizabeth Street), the French Second Empire (38 Elizabeth Street) and the Victorian Gothic (Methodist Church, 42 Hanover Street) modes are evident. There was a general re-interest in the porch as an extension of living space, and during this period, many earlier houses in the Borough added porches. Many porches were turned-column supported, bracketed and jigsaw scrolled designs. Also, this late 19th century period included a large number of storefront-commercial construction along Hanover Street. Fine Victorian fronts are extant throughout this commercial spine, from this period. Some houses, such as those on the north side of Mary Street, were built in the late 19th century of simple plan and form, but articulated with clearly identifiable Victorian porches such as 22, 23, 24, 26, 28, 29 and 30 Mary Street.

A thriving cranberry-related industry at the turn-of-the-century included packing and shipping berries, barrel-making, as well as a growers' organization. House construction during this era included large "foursquare" types found at 55, 56, 59, and 61 Elizabeth Street and smaller "bungalows" scattered around the Borough. The Foursquare houses retain the settings of the late 19th century Victorian houses, while the bungalows are architecturally compatible and, at times, excellent examples of their own place and time. Colonial Revival houses are contained within the Pemberton Historic District at the east end of Elizabeth Street (42 and 44 Elizabeth Street).

Most of the new construction within the Pemberton Historic District is generally compatible with the lustric fabric. The multi-family apartment building behind the Pemberton Inn on Elizabeth Street is a reasonably good example of contextual scale and proportioned on a 2-1/2 story frame. Another example of sympathetic design is the house on the southeast corner of Hanover at Reynolds Street (22 Hanover Street). There also exist less compatible Split-levels and single-story Ranch-style houses scattered within the Pemberton Historic District.

Pemberton Historic District offers the viewer a wide-range of architectural modes and styles in its buildings with the exception of the Greek Revival. In the buildings of the District, one can see clear indications of economic stimulation, population increases, cultural conditions and architectural evolution. As the mills have been destroyed, storefronts were converted to housing units, and cranberry packing houses and barrel factories demolished. Pemberton' Historic District's houses convey the epic of the Borough in the absence of many of these other structures.