Photo: Rotary in the center of Dublin, NH (part of the Dublin Village Historic District). The Historic District was listed on the National Register of Historic Places in 1983. Photographed by User:Magicpiano (own work), 2012, [cc-by-3.0 (creativecommons.org/licenses/by/3.0)], via Wikimedia Commons, accessed August, 2014. 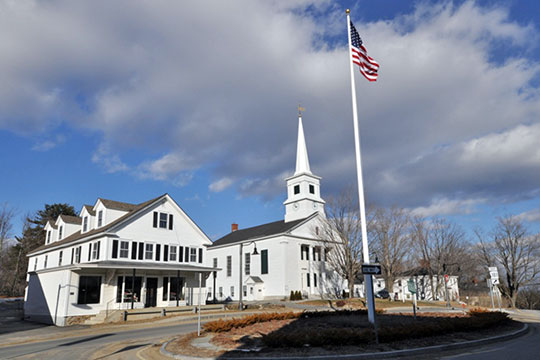 The Dublin Village Historic District was listed on the National Register of Historic Places in 1983. Portions of the content on this web page were adapted from national register nomination documentation. [‡]

In and near the center are the Dublin Community Church (1852 — Dublin Village Historic District's most prominent architectural landmark), and such other non-residential buildings as the Town Hall, Library, General Store, Elementary School, Historical Society, and the frame buildings housing the offices of Yankee magazine (founded 1935). The Dublin Village Historic District also contains two other churches: Emmanuel (Episcopal) and Our Lady of the Snows (Roman Catholic); the present Post Office (1877 — one-time Trinitarian Church and later Women's Club); and the wooded campus and earlier buildings of the Dublin School (an independent secondary school). Contributing to the village character are such sites and objects as the obelisk-shaped Civil War monument, the small village oval at the center, and stretches of old stone fences bordering Main Street and defining early farm boundaries.

No large paved parking lots have intruded into the Dublin townscape (the parking at the village center and "Yankee Square" is one-car deep). Occasional small open fields or "woodlots" are interspersed between some of the front lawns and gardens of the dwellings. The stately arching elms which once lined Main Street have fallen victim to disease (and past highway widening), but large indigenous sugar maples, other hardwoods and white pine in somewhat irregular plantings still give dignity to the streetscape. The terrain comprising the Dublin Village Historic District is hilly, and there is a variation of several hundred feet from its lowest elevation at the east end of Main Street (about 1,200 feet) to the Old Common on the west (over 1,500 feet).

The Old Common, the "town center" in the 18th century, was abandoned before the Civil War (due to harsh winter winds off Dublin Lake), and over the 19th century the present center gradually developed on its existing location in the hillside shelter of the east slope. All that remains of the original center is the grassy Old Common itself, the Parson Sprague House (c.1800), the Town Pound and Town Burying Ground. The early town buildings were torn down over a century ago and replaced with late-19th century Shingle style residences.

Nevertheless, the village as a whole developed from its earliest settlement in an extended "strip," more or less corresponding to the boundaries of the present district. Since the previous century the uses of the buildings have changed, from farmhouses and small handcraft manufacturing (e.g. shoemaking and blacksmith shops, et al.) to primarily residential use, but they have undergone few alterations and present a visually cohesive grouping.

Nearly all of Dublin's civic and institutional buildings and approximately one-third of the significant houses presented in the nomination lie within the Dublin Village Historic District, which comprises the physical center of the town. It is visually a "picture book" northern New England village, with fine, well-preserved examples of late-18th and early-19th century vernacular architecture, plus a representative sampling of later styles of the "resort era."

Despite the architectural changes and alterations inevitably reflected in the historical transition from a simple family-farm economy to today's more complex, technologically-oriented society, Dublin townscape retains the harmony and scale of a mid-19th century village. And despite the loss of important buildings (among them its two earliest meetinghouses, the original brick town hall, Gleason's store, and the Hotel Leffingwell), it retains plentiful examples reflecting the historical progression of the village. The few modern intrusions that exist are unobtrusive and detract little from the overall appearance of the village. (They, in fact, contribute to the vitality of village life and are integral elements in the activity of the town.)

This historical development of the village is physically manifested in its architecture. What is now the Dublin Village Historic District began in the late-18th century as a few large farms north and south of the Great Road (Main Street) plus the "public" structures (original meetinghouses of 1770 and 1818, town pound, etc.) at the westernmost end around the Old Common. Characteristic of the early full-scale farmhouses is the late Georgian style, 2-1/2 story, Greenwood-Scribner House (c.1780 — Main Street) with a massive central chimney and 5-bay facade.

As these original farms were divided among heirs and parcels sold off, newer buildings proliferated in the period of Dublin's agricultural prosperity (c.1800-1850). This growth is reflected in the "additive" architecture of nearly all the pre-Civil War houses of the district, where the original small cottage (c.1780-1810) is usually found as a back or side wing, or sometimes incorporated in an enlarged main section of the house. The Greenwood-Scribner House probably incorporates an older cottage, as does the hipped roof, Federal style Old Tavern House (1797 — Main Street) built as the town's first important inn, and location of its first post office (1813) and the Rev. Levi W. Leonard's Juvenile Library (1822-1831).

These stages are further exemplified in the John Piper-Yankee Books House (Main Street) with a 2-1/2-story late Colonial style front (1832) and single-story late-18th century back wing, or the Heald Tavern (1827 — Main Street), with a side wing dating to c.1794. The Greek Revival style in a simplified vernacular form, which came to the village in the 1830's and lingered until well after the Civil War, is evident in the front sections of the Samuel Jones-Bensinger House (1833 — Main Street) or the Joseph Thurston House (1839 — Main Street and Old County Road) and other examples.

Visible evidence of Dublin's once-thriving pre-Civil War handcraft industries is sparse, but still survives, for example, in Rufus Piper's cabinet-making shop at the Greenwood-Scribner place (1780 — Main Street), the small building probably once used for shoemaking at the Joseph Hay-Heckman House (c.1825 — Main Street), or the dammed millpond, once a tannery site, by the Fremont Mason House (1886 — Main Street).

Economic "hard times" due to out-migration, and the decline of agriculture and small home industries is evident in the absence of houses dating from c.1860-1880. Exceptions are the non-residential Dublin General Store (1869 — Main Street) and Trinitarian Church (now Post Office, 1877 — Main Street), both of latter-day vernacular Greek Revival influence.

The village was significantly augmented, however, in the period of Dublin's heyday as a summer resort (1880's-1920's). Although resort era architecture is primarily associated with the Dublin Lake Historic District, the village itself contains a representative cross-section of the styles of the period. These buildings, concentrated largely near the center and in the "upper village," were a direct result of the influx of well-to-do "summer people," who often commissioned well-known architects to design them