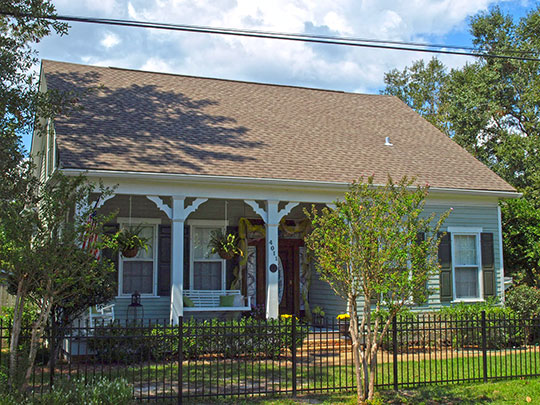 The Krebsville Historic District was listed on the National Register of Historic Places in 1991. Portions of the content on this web page were adapted from a copy of the original nomination document. [‡]

The Krebsville Historic District is set in north Pascagoula in what was referred to as Krebsville. It is a small part of that community which retains much of its turn-of-the-century appearance. The buildings are on generous lots, set spaciously apart, much the way they were when built. The 1909 Sanborn insurance map indicates that since that, time, only one house, which stood at the corner of Mill Road and Pine Street, has been lost, and four houses have been added.

The Krebsville Historic District's buildings consist of a school built in 1909, six center-hall cottages (or variations thereof) built between 1894 and 1900, two historic bungalows built about 1919, a Colonial Revival cottage built about 1932, and three later, noncontributing houses. The three noncontributing houses have a scale and setting similar to the other houses and do not disrupt the visual character of the Krebsville Historic District.

The Krebsville Historic District is a collection of thirteen modest residential buildings, one of which was formerly a public school. The Krebsville Historic District's significance is derived from the collection of middle-class residences built during the Golden Age of Pascagoula when the port, shipbuilding, tourism, and lumbering were flourishing. This collection of homes and their siting impart the feeling of "small town" Pascagoula at the turn of the century (1897-1900).

The structure that housed Lake School was built in 1909 to satisfy the needs of an increasing population in north Pascagoula (Krebsville). Six structures are center-hall cottages, or variations of that house type so prevalent in Pascagoula and coastal Mississippi.

4011 Pine Street, 710 Mill Road, and 707 Mill Road all have undercut galleries, in true cottage form. 811 Kell Avenue, 4205 Pine Street and 4215 Pine Street demonstrate variations of the center-hall cottage house type, the result of the influence of the picturesque nature of the Queen Anne style. 611 and 703 Mill Road are examples of early twentieth-century bungalows.

The area was once part of the Duchesse de Chaumont land grant. In 1721, three hundred settlers arrived to colonize and cultivate the area. About that same time, Joseph Simon de la Pointe built a palisaded complex on the shore of Lake Catahoula (now Krebs Lake). De la Pointe's daughter Marie married Hugo Ernestus Krebs, who arrived in the colony in 1730, and the young couple eventually inherited the plantation. Cotton was apparently one of the crops grown in the area, for a 1775 account by Bernard Remans notes that Krebs employed a cotton gin — this two decades prior to Eli Whitney's invention. The same account reports that a 1772 hurricane "totally destroyed" Krebs' plantation, and that the "houses were left uncovered, his smith's shop was almost all washed away, all his works and out houses blown down." The Old Spanish Fort (National Register, 1971) is believed to be a surviving element of this plantation.

The Spanish Fort remained in the Krebs family until 1914. The family remained prominent throughout Pascagoula's history, and were so prolific that the area became known as Krebsville.

In 1878 Sidoine Krebs subdivided much of what is now north Pascagoula, along Krebs Lake, in order to meet the growing housing demands of a prosperous community. Other Krebs family subdivisions include the Krebsville Subdivision (1887), the Rene Krebs Tract (1877), and the J.C. Krebs Tract (1894).

The area was eventually purchased and re-subdivided by W.K. Mead in 1892. It was then settled by workers in the nearby industries of M.M. Flechas Saw Mill, Planing and Shipbuilding, the F.B. Martin Shingle Mill, Gulf Ship Co., Pointeven Bros. Lumber & Shipbuilding, and F.B. Walker & Son Shipyard, along with many of the self-employed entrepreneurs of the town.

803 Kell Avenue represents one of the earliest usages of the Classic Revival style in Pascagoula. Built in 1909 as "Lake School" to serve the growing population of north Pascagoula, it was a counterpart of Beach School (1315 Washington Avenue), which served the beach community. The rear wing was added to Lake School about 1922, as the area continued to grow and prosper. The school operated in this building until 1939, when a larger school was built nearby.

811 Kell Avenue is a Queen Anne variation of the center-hall cottage. It was built in 1895 by Mary Julia Johnson, who owned it until 1901. Laurence Anderson then acquired it and retained ownership until 1965, when the present [1991] owner, Henry B. Moore, Jr., bought it. The varied wood detailing of the house was made possible by the local lumbering industry.

611 Mill Road is a modest bungalow, typical of those built just about the time of World War I. Its massing reflects the influence of the Creole cottage on twentieth century styles, while its construction dates reflect the economic boom in Pascagoula due to wartime shipbuilding activities.

703 Mill Road is a bungalow that reflects the influences of climatic conditions on the architecture of Pascagoula, as demonstrated by the large hip roof and wraparound porch. It was built to meet the housing demands generated by shipbuilding industry's participation in the first world war effort.

706 Mill Road is a modest F.H.A. Colonial Revival cottage, typical of those built during the Great Depression. Its simple detailing reflects the austerity of the period, and the major economic impact it had on Pascagoula. During this period, Pascagoula's population dropped significantly.

707 Mill Road is a small center-hall cottage which retains much of its original street facade appearance. It is a good example of a modest turn-of-the-century home. In 1900 Henry Hague acquired the land, and by 1902 was assessed for the house, which has remained in the Hague family.

710 Mill Road was built by Anna and Hugh Krebs in 1897. Krebs was a local ship carpenter and a descendent of Hugo Krebs, who had arrived in Pascagoula about 1730. The house is a center-hall cottage with minor Italianate detailing. The modest scale of the house is typical of many in Pascagoula, which boasted the nation's highest per capita self-employed individuals at the turn-of-the-century.

4011 Pine Street is another center-hall cottage, built between 1890-1894 by ship carpenter John Brondum for himself and Eurania Brondum. The front porch was originally full width. The central front door is well-detailed in the Italianate taste. The house is a good example of middle-class housing in Pascagoula during the 1880s.

4205 Pine Street — In 1896 Eugene J. Nelson purchased this property from W.K. Mead, and by 1902 was assessed for this modest residence. It is typical of many built throughout the city during that time. The house stayed in the Nelson family until 1920. Subsequent owners have been Annie J. Ros, J.O. Brondum, M.W. Slater, and John M. Borho.

4215 Pine Street, although hard to detect, is basically a center-hall cottage with an added tower and independently roofed gallery. In 1910 Joseph W. Mead bought the land from W.K. Mead. The 1918 Sanborn insurance map does not show this house, nor do the assessment rolls of that year. It is not until 1921 that the house on this site is assessed. It is hard to believe that this structure was built that late, and it is likely that it was moved from another site. Subsequent owners include Emma L. Hiland, Alice Gray Lozel, Charles M. Bush, T.B. Gallospy, Jr., Theron T. Chapel, and John M. Borho. The house is significant as a link to the prosperous pre-World War I era of Pascagoula.