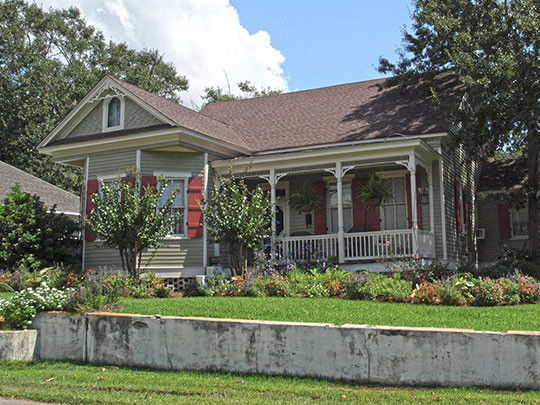 The Captain Willie Bodden House was listed on the National Register of Historic Places in 1991. Portions of the content on this web page were adapted from a copy of the original nomination document. [‡]

The Captain Willie Bodden House at 4002 Pine Street, Pascagoula, Mississippi, sits at the front of a deep lot, facing west; the back faces east to a slough. The slough curves, making the lot about a third deeper on the north side than the south, and it comes relatively close to the south side of the house. This house is located close to the north property line; a side wing on the south side at the back of the house extends across to the south property line, which falls along a parking area. Landscaping is not distinguished; there is a lawn and some foundation planting in front. There is one large tree in the southeast corner, and a tree close to the south of the main front gable.

The frame house in the Queen Anne style has a double-pitched roof, clad with asphalt shingles, parallel to the street, with a gable on the north and south sides. On the north front end, a clipped gable with lower ridge makes an octagonal-ended room. The projecting roof eaves with simple boxed millwork run along the main roof, and along the sides and front of the front gable, returning on themselves at the north and south gable ends of the main building mass. Verges are similar, and have a deep fascia.

A porch runs from the south side of the octagonal projection, almost to the south end of the front wall. It has a low-pitched hipped roof set right under the eaves of the main roof.

The Captain Willie Bodden House is clad with weatherboards and corner boards, with a water table and large skirt fascia at floor level. The house sits on brick piers with open-work brick infill at the front porch and front octagon.

At the clipped gable, the attic level has a sash glazed with colored panes. The walls are clad with rectangular-shaped shingles set with every other shingle shorter than its neighbor, making a patterned surface. On the half-octagon mass below, each surface has a two-over-two sash in a simple frame.

The three-bay Eastlake front porch projects about five feet from the front wall of the house. It has a simple boxed fascia projecting out from the boxed soffit beam. The posts are turned above a rectangular base which receives a railing with turned balusters, and below a rectangular top block to which small open-work jigsaw brackets are set. Where the porch butts the octagonal projection and the main front wall of the house, the posts are about half their typical width, and weatherboards are trimmed and fitted to butt them.

The entrance is up concrete steps the full width of the porch bay next to the octagon, leading directly to a front door frame with a single light transom above and a single-acting door below, set with leaded glass. To the south of the door are two two-over-two double-hung sash set in single frames. On the south gable end, the eaves return about three feet, receiving the gable verge. Sash on the end are two six-over-six double-hung, set in one frame. On the south gable end, there is a wood stair to a second floor level wood porch. At this level is a door, a small high window to the west, and a lower window to the east, all replacing probably a double sash opening like the south gable end, and indicating a residential unit inside. A small wooden louver opening falls at the top of the gable end wall.

At about three-quarters of the way each on the south gable end, an L-shaped, one-story wing (ca. 1935) with gable roof runs south a distance almost that of the main house width. At the south end, it terminates in a gable end, the front eave turning the corner to receive the verge; the eave to the east catching the verge and running west over an open porch along one side of the ell. This easterly ell also ends in a gable, with a porch at its south side. Of the porch, the east bay and easternmost bay of the south side are intact. The center bay has been reduced towards the west, and the west bay has been filled in entirely, and contains a small variant four-over-four double-hung sash. The porch, which with the floor level is about six feet or so above grade, is on brick piers, infilled with wood, and has the same posts and brackets as the front, but a variant pattern in the rail of vertical and horizontal patterned millwork.

The west elevation of this wing has on each side a six-over-six double-hung window, and at the center, a door, with head lower than the windows, of lights above panels. Another six-over-six is centered in the south gable, below a small wood ventilator in the upper gable.

The Bodden residence is a center-hall cottage, modified by the late Victorian styles. A center hall bisects the cottage; on the north side of the hall is a pair of major rooms with a wooden mantel on the common wall in each room.

In the southwest corner of the lot, there is a wood frame garage on low concrete chain walls with a low-pitched roof. Its front gable-ended elevation has a single wide opening going out to the side street via a concrete drive.

The dredging of the Pascagoula River in 1875 led to expansion of the port and the lumber and shipbuilding industries and, correspondingly, opportunities for sea captains increased during the late nineteenth and early twentieth century.

The house was built for Captain Bodden in 1910. Bodden was noted for his seamanship, and was one of the last skippers working for the lumber trade, and was the last captain to sail triple-masted ships out of the port of Pascagoula. Although a very late example of the Queen Anne style, it is one of the most intact examples of a middle-class home in Krebsville. The cottage follows a design formula found throughout the state, but more common outside of the Gulf Coast area. The projecting bay with its clipped corners and decorative shingles on the gable end and the abutting Eastlake detailed front porch impart a true feeling of the early twentieth century. The house type is a modified Creole cottage. It remained in the Bodden family until 1976. Subsequent owners include James W. Lee, 1976; Robert J. Dambrino III, 1982; and Larry K. Taylor, 1985.

The flourishing port created jobs, which resulted in the demand for middle-class housing. Such houses help define the area's historic context in a very tangible way, helping one to visualize, in the case of 4002 Pine Street, for example, the life-style of sea captains during the early twentieth century in Pascagoula.