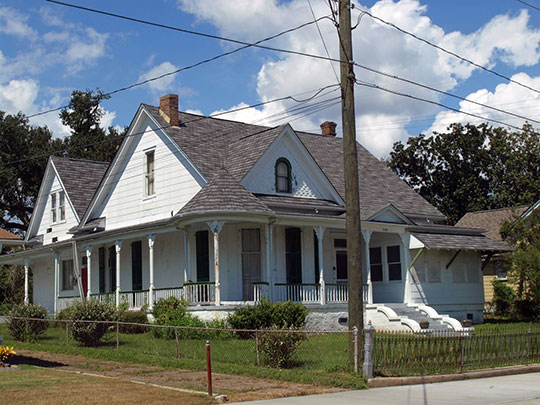 The DeJean House was listed on the National Register of Historic Places in 1992. Portions of the content on this web page were adapted from a copy of the original nomination document. [‡]

The DeJean House, facing east at 3603 Frederic Street, in Pascagoula, Mississippi, is adjacent to a commercial/industrial area of Pascagoula. Designed and built in 1906 by Ambrose Linder for Valsin Pierre DeJean, the house is a Queen Anne cottage that has many features typical of this architectural style. The property is bordered on two sides by the original cast iron fence with wrought iron details, manufactured by the Stewart Iron Works of Cincinnati, Ohio. The fence has been maintained in excellent condition and is a distinct feature from the street. To the south side of the house is an alley that serves this and adjacent properties.

The DeJean House is a one-and-one-half story, wood frame structure with a one-story asymmetrical wraparound front porch extending the full width of the residence and turning at a circular pavilion on the south corner to run the full length of the south elevation. The hipped porch roof is supported by full height turned columns with decorative lace-like jigsawn brackets. Spanning from column to column is a spindled balustrade with plain hand and foot rails. On the main facade, the north end of the porch was enclosed in 1912 when a physician recommended an open air atmosphere for the treatment of DeJean's son, who was diagnosed with rickets. Since this construction occurred shortly after the house was built, the exterior and interior finishes of the sun porch are similar to those of the house. From the interior, the feeling and details remain as an enclosed porch. The one-over-one, double-hung windows of leaded glass with diamond-shaped mullions are more detailed and ornate than any other windows in the house. This amount of detail allows the enclosure to be more than functional; it adds some character, and along with the extended roof structure helps express this construction as a change to the original.

Intersecting north-south and east-west gables comprise the primary roof structure with a secondary gable on the south elevation and a pedimented gable at the hipped porch roof above the front east entry. The dominant gable on the east (front) elevation is centered over a bay window. This gable is faced with patterned wood shingles and has a round-arched window opening. Roof shingles on the house are asbestos tiles laid in a diamond pattern with clay tiles for hip and ridge tiles. The roofing of the sun porch is constructed of exposed rafters with diagonal supports and is hipped at the northeast corner. Due to a fire across the street at a laundry which damaged (scorched) the original wood lap siding along the front of the house, the asbestos siding was added over the original siding in 1954.

The main entry to the DeJean House is a single-leaf glazed and panelled door topped by a single-light etched glass transom. All of the windows of the house, except the windows to the kitchen and laundry room, are original. The windows to the parlor and dining room are floor-length, one-over-two, double-hung sash. These windows are protected by full-height, louvered shutters secured with original brass hardware. The exterior trim is simple with a decorative crown.

The interior of the DeJean House has a central hallway, with the parlor, dining room and kitchen to the south and the enclosed sun porch, two bedrooms and a bathroom to the north. The west end of the hall originally opened onto a rear porch, but this porch was enclosed in 1954 to create a laundry room. An elaborately detailed spindlework screen in the central hallway separates the entry area from the rear hall. This lace-like screen rests on a panelled wooden base with rod-and-bead molding. The single-flight stairway leading to the second floor is in the rear hall and features a turned newel post and turned balusters. The hallway has plaster walls and ceiling, beaded wood wainscoting, a 2-inch crown molding, and a 9 1/2-inch baseboard.

Doors throughout the DeJean House are five-panel topped by single-light transoms, while panelled pocket doors with oval escutcheon plates and finger grasp hardware separate the parlor from the dining room. Windows and doors on the first level have molded trim with bull's-eye corner blocks, while the moldings of the second level do not have the bull's-eye corner blocks. The house retains its six original mantelpieces, four of which have mirrored overmantels. Like the hallway, the parlor also has a beaded wood wainscot. Wood panelling was added to some of the rooms in 1965, but with removal could allow the original plaster underneath to be restored. The major rooms retain their original chandeliers.

A garage, accessible from the alley, was added to the west (rear) elevation in 1972. At the southwest corner of the lot, adjacent to the alley, stands the original servants quarters constructed at the same time as the main house. The materials on this building are original with little or no changes since construction. The structure is in poor condition, but serves as an example of the methods of construction employed on the main house.

The DeJean House is architecturally significant within the residential context of Pascagoula, being one of only a few Queen Anne cottages in the city that retain integrity. A boom in the lumber industry from 1888 to 1910 stimulated Pascagoula's growth, and as a result many houses were constructed. A survey of the surviving houses dating to this period indicates that most are relatively modest late Victorian vernacular houses, some of which have stock millwork applied in an attempt to make them fashionable. Houses built in a self-conscious effort to imitate the popular Queen Anne style are relatively few in number, and only a handful of well-preserved examples remain. The DeJean House, built in 1906, is one of only seven Queen Anne cottages remaining in Pascagoula that retain integrity. Two of these — the Captain Willie Bodden House and Colle Company Housing — are simple builders' Queen Anne examples of the gable-front-and-wing form, and both are listed in the National Register of Historic Places. The other four include 4215 Pine Street (c.1900), which is an element of the Krebsville Historic District and is in only fair condition; the Farragut House (1899), which is in very deteriorated condition; the Swartwout House (1908), a Free Classic example listed in the National Register; and 1101 Beach Boulevard, a c.1900 house that had Queen Anne elements added in 1908. There are only six surviving two-story Queen Anne houses in the city, of which only three retain integrity.

The DeJean House is a good example of the Queen Anne style, with such details as gables clad in imbricated shingles, a bay window, a wraparound porch with turned columns, corner brackets, turned balusters, and a circular corner pavilion. The floor-length windows opening onto the veranda are a regional building tradition, designed to allow the cool gulf breezes into the house. The interior boasts such fine features as an elaborately detailed spindlework screen in the central hallway, beaded wood wainscoting, panelled pocket doors, five-panel doors topped by transoms and surrounded by molded trim with bulls-eye corner blocks, original light fixtures, and six original mantelpieces, four of which have mirrored overmantels. Although the north end of the porch was enclosed around 1912 and asbestos siding was added in 1954 when the lap siding was scorched, the house retains integrity of location, design, setting, workmanship, feeling and association.

At the turn of the century the area along Krebs Avenue, one-half block south of the DeJean House, was a major business district that contributed to the residential areas that developed around it. The original owner of the DeJean House, Valsin Pierre DeJean, owned and operated his family's business on Krebs Avenue. Valsin Pierre DeJean also served as Jackson County's Commissioner of Finance from 1919 to 1940 and 1945 to 1953. His parents came to Scranton (the name of this portion of Pascagoula prior to 1904) in 1884 and established the DeJean and Mitchell General Mercantile and Ship Chandlery, which was one of the original businesses developed along Krebs Avenue. A circa 1896 publication noted that of the ship chandleries, DeJean and Mitchell was the largest business house of Scranton, with stock valued at about $25,000. The house was built in 1906 by a builder, Ambrose Linder, for Valsin Pierre DeJean and his bride, May Mundy. The house has remained in the DeJean family.

DeJean, Julia-Mae, Daughter of Valsin Pierre DeJean. Interviewed by Cindy Obier, Architect with Bruce B. Tolar Architect, Ocean Springs, at Pascagoula, Mississippi. May 8, 1992 and May 12, 1992.