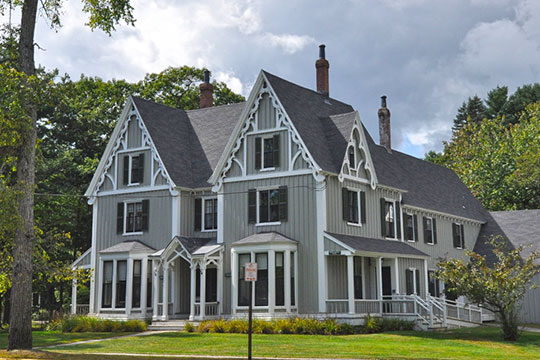 The Henry Boody House (256 Maine Street) was listed on the National Register of Historic Places in 1975. Portions of the text below were adapted from a copy of the original nomination document. [‡]

The Henry Boody House of 1849 is a Gothic Revival cottage which is considered a forerunner of the Stick Style. Heavy corner posts, half timbered gables and a board and batten surface treatment all reflect Architect Gervase Wheeler's concern with expressing the structural qualities of the house.

The Boody House is rectangular in shape, stands three stories high and has a multi-gabled roof. Its foundation is granite, while its structure is frame. The facade or east wall is composed of three bays. The central bay has two stories and is recessed between two flanking three-story bays. The first story of the central bay contains a door which is flanked by sidelights and fronted by a porch. Above the porch is a second story double window.

Each of the two flanking facade bays are identical in design. There is a four-part bay window on the first story, a two-part window on the second and a single window on the third. The single window is located within the roof gable and is framed by strips of boarding which give a half-timbered effect. The gables are decorated with intricately patterned bargeboards.

The west or rear wall is divided into three bays. As on the facade, the central bay is two stories high. Each story contains a double window. Likewise, the first two stories of the southwest bay have double windows. The third story repeats the familiar gable motifs. The northeast bay is the location of the kitchen ell and stable.

The interior of the Boody House is symmetrically arranged. On the first story, the central hall is flanked on the left by a parlor and a sitting room and on the right by a library and a dining room. The second and third stories are devoted to bedrooms and storage areas.

Gervase Wheeler provided Henry Boody with a substantial and distinctive Gothic Revival residence. The house remains virtually unaltered after a century and a quarter. It has now become recognized as an important design of its period which possessed ramifications for the development of nineteenth century American Architecture.

The Henry Boody House in Brunswick is a major precursor of the later nineteenth century Stick Style. Designed in 1848, this unusual Gothic Revival cottage is the work of Gervase Wheeler, an English Architect who came to America in the 1840's. Wheeler's use of exterior detail to reflect internal construction expressed an emerging aesthetic of reality in architecture. Boody built the house from Wheeler's plans in 1849. The following year the design received national exposure when it was published under the title "A Plain Timber Cottage Villa" in Andrew Jackson Downing's The Architecture of Country Houses. In his description of the "Cottage Villa," Downing quoted Wheeler's thoughts on it:

This is essentially real. Its character is given by simplicity and fitness of construction. The construction itself, though simple, is somewhat peculiar. It is framed, but in such a manner as that on the exterior the construction shows, and gives additional richness and character to the composition.

At the corners are heavy posts, roughly dressed and chamfered, and into them are mortised horizontal ties, immediately under the springing of the roof; these, with the posts, and the studs, and framing of the roof, showing externally.

Downing's publication of Wheeler's design apparently attracted some attention, for the architect William Brown of Lowell, Massachusetts used a slightly altered version for his client Benjamin Butman's new home in Worcester in 1853. That year Brown pictured the Butman House in his Carpenter's Assistant, a Boston publication.

Henry Boody, for whom the initial "Cottage Villa" was planned, was an 1842 graduate of Bowdoin College in Brunswick and its Professor of Rhetoric and Oratory from 1845 to 1854. How he came into contact with Gervase Wheeler remains unknown, for the architect had not yet written the two books which brought him recognition, Rural Homes of 1851 and Homes for the People of 1855. While Downing termed the house "very economical" and Wheeler claimed that its cost was $2,800, Boody placed the figure considerably higher in this revealing passage from an 1850 letter to his mother:

You may perhaps wonder very much that with a salary of a thousand dollars I am so pinched for money, but I can explain the whole mystery in a few words. Last year I built a house which I expected would cost me $2,500. It actually cost me $5,000, independent of the land, for which I paid $1,000. This money I was obliged to hire and in these times it is not easy to hire money except at very high rates of interest.

Boody eventually abandoned the struggle to live on a professor's salary, and after brief service in the Maine Legislature, he moved to New York, where he had a long and successful career as a banker and railroad president. He rented his house in Brunswick for a time and then, probably in 1870, said it to William Stanwood Perry, a greater Boston businessman returning to his native Brunswick. Perry is said to have practiced experimental farming on the extensive grounds of the property, much of which were later sold.

Some time after Perry's death in 1873, Alfred J. Bodker purchased the property, allegedly for the price of $1200. Booker, a cousin of Ira P. Booker, then Bowdoin College treasurer, was in charge of buildings and grounds at Bowdoin. Although his wife and children were apparently eager to occupy the house they were denied the opportunity, since Booker soon sold the property to Henry Johnson, a member of Bowdoin's class of 1874 and Professor of Modern Languages at Bowdoin from 1877 to 1918.

In 1881 Professor Johnson married Frances Robinson, and they lived together in the house until his death in 1918. Thereafter Mrs. Johnson occupied the house until her own death in 1949. Their younger daughter, Anne Johnson Robinson, died in 1925, her husband, Warron Eastman Robinson, Bowdoin 1918, having been killed in action at Meuse Argonne during the final week of World War I. The older daughter, Helen, wife of Stanley Perkins Chase, a Bowdoin graduate of the class of 1905 and Professor of English at Bowdoin from 1925 until his death in 1951, willed the house to Bowdoin College. Since 1958 it has served as the official residence of the Dean of the College.