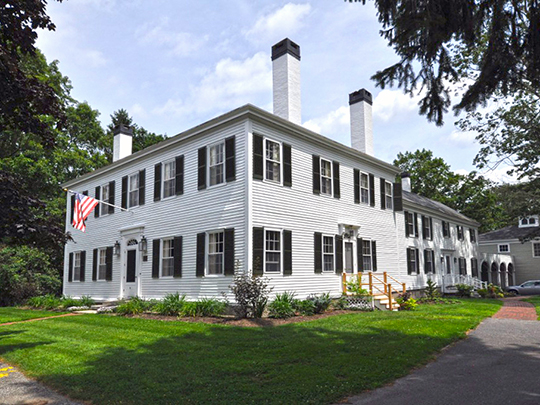 The Town of Brunswick was incorporated in 1717. The first election of town officers was in 1719; John Heath was chosen clerk and treasurer and Peter Haines, constable. The chosen selectmen were Captain John Gyles, Thomas Wharton, James Starrat, John Cochran, and Joseph Heath.

The Town of Brunswick forms the northeastern portion of Cumberland County. It is bounded north by the Androscoggin River, noted for its numerous falls and abundant water power. Merrymeeting Bay, which lies east of Brunswick, is formed by the confluence of waters of the Androscoggin, Muddy, Cathance, Abagaduset, and Kennebec Rivers. It is about six miles in length and three in breadth at its widest part.

Thomas Purchase was the first settler within the present boundaries of the Town of Brunswick. There is some doubt as to the precise location of his residence; some authorities place it at the head of New Meadows River; others at Pejepscot (Brunswick) Falls; but the fact that he settled here as early as 1628, before there were any other English settlements east of Saco, is abundantly proven. In 1632, he and George Way obtained a patent from the Plymouth Council (of England) for a tract of land embracing the famous salmon fishery at the Pejepscot, and extending on both sides of the river "four miles square towards the sea." Way never settled on any portion of this patent. In 1638, Purchase, in an indenture made with Governor Winthrop, placed it under the jurisdiction of Massachusetts Bay, desiring, no doubt, in this remote and isolated situation, to secure the assistance and protection of the strongest neighboring English colony, in case of an outbreak or difficulty with the Indians. It does not appear that Purchase desired to form a settlement of any considerable extent upon his grant, but had selected this site with a view of monopolizing the fishing ground and trade with the natives.

Thomas Purchase must have been a man well known in the colony. He not only held at different times offices of trust and responsibility, but also made, it would seem, a frequent appearance in court.