Photo: Homes at Palm and Houghton, Houghton Street Historic District, Worcester, MA. The Historic District was listed on the National Register of Historic Places in 1989. Photographed by User:John Phelan (own work), 2012, [cc-by-3.0 (creativecommons.org/licenses/by/3.0)], via Wikimedia Commons, accessed May, 2017. 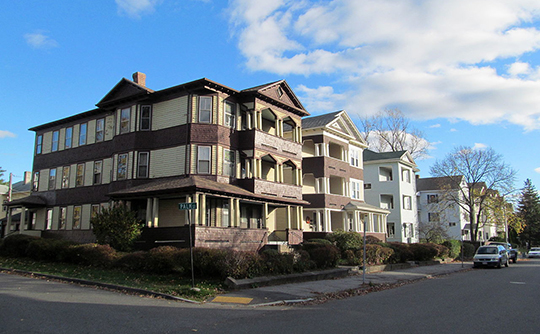 In 1674 Daniel Gookin visited the Nipmuck Indians with the Apostle Eliot. Eight years later he returned as the leader of a small group. But in 1702, Queen Anne's War drove out the little band of settlers just as they were about to enjoy the fruits of their labors. In 1713, at the close of the war, one of the refugees, Jonas Rice, returned to Worcester, and the home he built marked the beginning of the permanent settlement. Within five years two hundred people had established themselves here. The rumblings of the next half century, which were to culminate in the Revolutionary War, found a responsive echo here, and the town ultimately set up its own Patriot's Committee. The patriot publisher, Isaiah Thomas, escaped from the Boston Tories to Worcester with his printing press, and here in a hospitable environment continued printing his paper, The Massachusetts Spy. The broadsides and pamphlets which poured from his presses had much to do with consolidating the various revolutionary elements throughout New England.

In 1786, the courthouse was besieged by impoverished farmers, a major demonstration of Shays's short-lived rebellion, frustrated by Chief Justice Artemas Ward. Significant also was the action of a Worcester lower court in 1791 in a case involving the rights of a Negro slave. The court decided that the clause in the Bill of Rights stating that 'all men are born free and equal' was applicable.

Textile manufacture started in 1789 when the first piece of corduroy came off a Worcester loom. In 1789 a factory (Worcester Cotton Manufactory) was organized, but this attempt proved premature owing to the primitive stage of mechanical development. Cotton goods could still be imported from England far more cheaply. Domestic paper, however, found a ready market. The city became a manufacturing center after the advent of steam power. Then, in 1828, the Blackstone Canal was opened, the first step toward making Worcester the greatest industrial city in the United States not on a natural waterway.

Worcester witnessed, during the fifty years after the Civil War, the growth of four major industries. A decade prior to the war Ichabod Washburn had improved the process of manufacturing wire, specializing in the manufacture of piano wire. Giant plants of the American Steel and Wire Company employed 6000 persons by the 1930s. At that time their 200,000 wire products include ordinary nails, as well as platinum wire valued at $1000 per pound, and the heaviest cable in the country.

The invention of a fancy loom in 1837 by William Crompton, then a resident of Taunton, revolutionized the textile industry. The Crompton Loom Works, later established by him in Worcester, carried on a successful business for well over a half century, finally consolidating with the Knowles Loom Works. By 1935 the plant covered an area of 26 acres.

In 1875 F. B. Norton made a modest start at producing grinding wheels by the vitrified process. Today the Norton Grinding Company supplies a world-wide market and has several plants in Europe.

The first practical machine for making envelopes was invented by Russell Hawes of Worcester in 1852, and numerous improvements on the machine were made later. After a number of consolidations the giant United States Envelope Company emerged at the turn of the century, controlling some sixty per cent of the envelope production of the country.

Although these four industries dominate the city's industrial life, there are nearly 1000 other manufacturing units, the products including shoes, slippers, rugs, leather belting, paper-making and textile-making machinery, crankshafts, valentines, Pullman coaches, and screws.

At the time of the building of the Blackstone Canal (1828), laborers came over in great numbers from Southern Ireland and were followed in 1845 by many of their countrymen during the Potato Famine in Ireland. Many French-Canadian workers came to Worcester after the Civil War, and today they and their descendants number some thirty thousand. Beginning 1828, the demand for skilled engineers and craftsmen attracted many Swedish immigrants. It is estimated that in 1935 one fifth of the population was of Swedish descent. At the close of the nineteenth century began an influx of Poles, Jews, Lithuanians, Italians, Greeks, Armenians, Syrians, and Albanians, which terminated only with the outbreak of the World War. The Negroes also form a definite group. Such divergent racial strains have brought to the city cultural backgrounds which differ widely. This has had the effect of giving Worcester a cosmopolitan stamp, preserved by fraternal organizations, singing societies and athletic associations of the various groups.