Photo: House on Mossway in the Bellona-Gittings Historic District, Baltimore, MD. The Historic District was listed on the National Register of Historic Places in 2008. Photographed by User:Smallbones (own work), 2014, [cc-by-1.0 (creativecommons.org/publicdomain/zero/1.0/deed.en)], via Wikimedia Commons, accessed January, 2016. 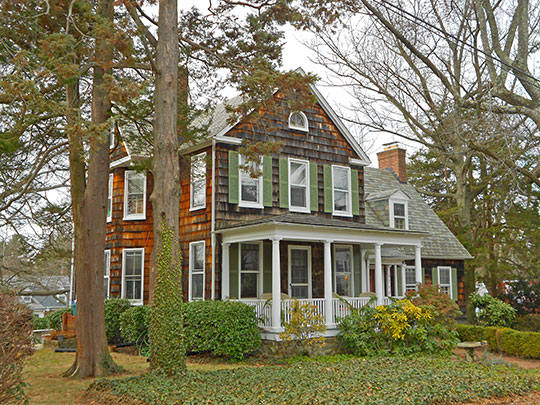 The Bellona-Gittings Historic District was listed on the National Register of Historic Places in 2008. Portions of the content of this web page were adapted from a copy of the original nomination document. [‡]

The Bellona-Gittings Historic District is located in a compact and internally consistent area approximately one third of which is located in southern Baltimore County and two-thirds of which lies in northeastern Baltimore City. Although the district straddles two jurisdictions, it is represented by a single community organization, the Bellona-Gittings Association. The district, although slightly rectangular, is irregular in shape due to its complex pattern of streets and roadways. During the period of significance, which extends from 1853 to 1958, the architecture of all contributing resources includes the following styles and types: Federal Revival, Dutch Colonial, Tudor Revival, Gothic Revival, Cape Cod Revival, Colonial Revival, Split-Level, and Ranch. Although the architectural styles in the district are varied, the style that is most predominant is Federal Revival. The resources of the district total 449, which includes 374 residences, associated garages, and one commercial property which is a one story brick store building used for a neighborhood pharmacy and wine store. The architecture of this building harmonizes with the surrounding buildings. Of these resources, 395 are contributing and are characterized by a high level of architectural integrity. Most of the 54 noncontributing resources were constructed later than the period of significance. Architects or architectural firms known to have designed buildings in the district include the following: John A. Ahlers, A.W. Coote, William H. Emory, Jr., A. Lowther Forrest, T. Worth Jamison, Jr., Ferdinand P. Kelly, Harry Michelmann, Palmer & Lamdin, Theodore Wells Pietsch, Donald Ratcliffe, M.J. Ruark, Smith & May, A.W. Smith, Joseph Stinebacker, Frederick Thomas, and Louis H. Will. Builders working in the district included A. Arnold & Sons, Harry N. France, Ormsby D. Hampson, Hoops & Lamb, Milton C. Klutch, Henry Momberger, and Henry T. Sorrel & Sons.

The history and context of the Bellona-Gittings district starts with the land, which since colonial times has passed through many hands. The first owner of European descent was Lord Frederick Calvert. From him a 1,000-acre tract (of which present-day Bellona-Gittings is a part) passed into the hands of Job Evans. Evans named this large tract of land lying between the present day communities of Towson and Govans "Friends Discovery." William Govane, who was established as a large landowner south of Evans eventually acquired Friends Discovery" as well. Samuel W. Hopkins later purchased a part of "Friends Discovery" from Govane. On that land, a number of present-day communities are located, including Bellona-Gittings.

During the Federal period, the land on which the historic district is located underwent acquisitions from three major sources. A portion of the eastern part of the land passed through the Gittings, then Schwerdtman families and another portion passed from Hopkins to Schwerdtman. From Schwerdtman, most of this land then passed to Gustavus Schwarz a business partner of Schwerdtman, who in 1858 sold 24 acres of it to George M. Lamb. In 1922, this land was acquired by Lamb's son, Philip E. Lamb. In developing Bellona-Gittings, Philip E. Lamb used his knowledge of the resources that were used by his father and older brothers to develop the Cedarcroft community. Philip, an attorney, had been employed as the secretary and attorney for the Cedarcroft Company.

In 1910 the adjacent Cedarcroft Land Company had employed the architectural firm of Palmer, Willis and Lamdin to finish the subdivision plan which the Lambs initiated by the use of straight roadways and rectangular lots. Edward L. Palmer, Jr. as the architect for the Roland Park Company worked with Frederick Olmsted, Jr. as Olmsted designed Guilford. The path of the curving roadways of Hollen, Blackburn and Pinehurst in Cedarcroft plus the shallow gutters to be found in part on these roadways reflect design motifs used in Guilford as suggested by Olmsted. The section of the district west of Bellona reflect these design motifs. The roadways in the eastern section had been established prior to that section being owned by the developer, Philip Lamb.

In 1922 Philip E. Lamb hired the firm of Shryock & Sykes, Engineers and Surveyors to plat the land on the east side of Bellona Avenue. This resulted in the use of the existing roadways and a redrafting of the lots. Philip Lamb created the Blenheim Realty Corporation for the development of the subdivision then named "Pinehurst." The sale of 16 of the 28 lots within two years encouraged Philip Lamb to plat the section to the west of Bellona Avenue. This was announced February 1, 1923. This parcel had been owned by Isaac H. Moss who had established nurseries on his land.

The influence of curved roadways and irregular lot shapes in Cedarcroft was translated to the creation of Midhurst, Mossway, Boxwood and Thicket Roads. At an earlier time the Lake Avenue Land Company had purchased land circa 1882 to the south of the Moss parcel and surrounding the Overlea Estate of Charles S. Golding. This land development company used traditional rectangular lots for its plan and had only sold 14 lots by 1915. In 1916 the Blenheim Realty Corporation purchased the remaining unsold lots that were owned by The Lake Ave Land Company in this southern part of the district. In 1916 Charles Golding hired E.V. Coonan & Company, Surveyors and Engineers to plat his land into 28 lots retaining the largest lot for his estate house at 112 East Lake Avenue.

The land east of Charles Street Avenue and north of Lake and south of the southern boundary of Charlesbrook was the estate of Richard J. Capron (an early President of the Roland Park Company). On March 18, 1916 The Charles Street Avenue Corporation purchased from John F. Semmes, trustee of the Capron estate about 31 acres of land on Charles street extended, at the corner of Lake Avenue and Gittings Avenue and on the north side of Gittings Avenue. The company announced that it would develop the property in 10 building lots of about two to five acres each after plans prepared by W.W. Parce, architect (probably a draftsman) of the Roland Park Company. The roadway created for this section was later named Charlesmead. Eighteen lots were the final result of that plat. Number 6011 Charlesmead was the only house on the Capron land at that time and it was a simple two over two design first taxed in 1853. The first sales of lots took place in January of 1917 and the first house built after the purchase by the company was number 2 Gittings. By 1922 the Capron land between Gittings and Lake Avenues was platted and in 1922 Theodore Wells Pietsch designed the French Eclectic Villa for Luther M.R. Willis at 5901 Charles Street and soon after this a large Federal Revival Style house designed by E.L. Bilner, Jr. was constructed at 6009 Charles Street for George E. Probst. The Baltimore firm of Smith and May in 1924 designed the Federal style frame house at 5914 Charlesmead for Allen W. Mason. In 1925 the Baltimore architect William H. Emory, Jr., who had been involved in the development of Roland Park, designed the Georgian Revival house at 6001 Charles Street for E.R. Elliott. This was followed in 1926 by a Frederick Thomas design at 6003 Charles Street, and during the same year William D. Lamdin—who had just joined the Edward L. Palmer, Jr. firm—designed the substantial Tudor Revival style house for Dr. Curtis F. Burman at 11 Gittings Avenue. The remaining Capron land was platted circa 1954 with a curved roadway and irregular lot shapes.

A major part of the remaining section of the former Capron parcel was purchased by John Gardner Murray in 1925, and the house at 6 Gittings Avenue was designed for Bishop Murray's son-in-law, Auville Eager by T. Worth Jamison, Jr. Bishop Murray was the Bishop of Maryland, becoming head of the Diocese of Maryland on January 18th 1911. In 1925 Bishop Murray was elected Presiding Bishop of the Protestant Episcopal Church of the United States. Bishop Murray's grand-daughters and their husbands built homes on the remaining lots of the original parcel.