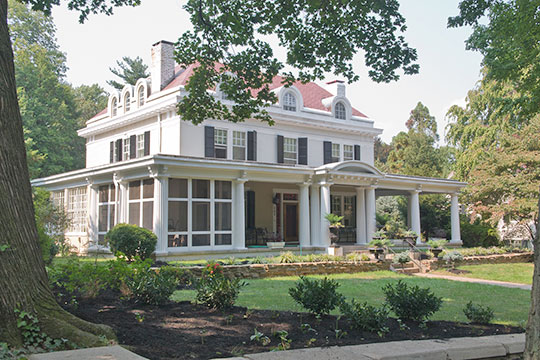 The Roland Park Historic District was listed on the National Register of Historic Places in 1974. Portions of the content of this web page were adapted from a copy of the original nomination document. [‡]

Roland Park, named for Roland Thornberry, an English landowner in Baltimore County, had its beginnings in 1890 when William Edmunds decided to develop 100 acres and invited Edward H. Bouton, a developer from Kansas City, Missouri, to come to Baltimore. The Lands Trust Company of England invested a large sum of English money in the bold scheme and The Roland Park Company was incorporated, with Bouton as its general manager. Bouton brought in George E. Kessler, a landscape architect trained in Germany and who had worked briefly with the firm of Frederick Law Olmsted, Sr., to be the topographical and landscape engineer. Kessler laid out gracefully curved streets, paths and large lots on the first plat of land, lying east of Roland Avenue. Before the lots were sold, electric lines were installed, a private telephone company established, and sewerage and water provided—all under the auspices of the Roland Park Company.

Restrictions were incorporated within each property deed to assure the preservation of the character of the area. These included provisions for setbacks and planting, prohibited outbuildings, and stables and required the Company's approval of all architectural plans. Further, the residents were required to pay a maintenance fee to the Company to finance the upkeep of the public streets and sidewalks. These restrictions are still in effect today and have become the model for similar covenants in other communities. The restrictions are undoubtedly the largest single factor in the preservation of the district.

With the start of the second plat to the west of Roland Avenue, the firm of the outstanding landscape architect, Frederick Law Olmsted, was commissioned to lay out the streets and plan the landscaping. Thus in 1897, Frederick Law Olmsted, Jr. took up the planning of the steeper and more difficult terrain. He created a controlled natural setting by preserving the steep hillsides, valleys, streams, and woodlands. Great caution was exercised to protect the trees and natural vegetation by laying the roads around them and following the natural contours of the site.

The architecture of the district typifies the romantic tastes of the turn of the century, with many examples of the Queen Anne, English Tudor, Georgian and Shingle styles. 402 Hawthorne Road is a white frame Queen Anne style house. Its most prominent features are the tower on the south corner, rising the full three stories, the irregularly shaped windows throughout, the large open porch across the front which wraps around the south side, and the irregularly of plan and texture.

A shopping center, one of the first in the country was included as a part of the plan. Located on the west side of Roland Avenue just north of Upland Road, the principal facade was executed in an English Tudor style often repeated in residential construction. The ridge of the roof which parallels Roland Avenue is broken at either end by a two story cross gable with a gambrel shape. In between, seven dormers (three on the second floor and four at the third) project from the roof. The dominant nature of the roof takes ones eyes from the store fronts on the first floor which are further hidden under the projecting eave of the roof. The stuccoed ends of the roof curve down from the chimneys in a manner associated with Jacobean architecture. This same treatment exists on the Baltimore City Fire station adjacent to the shopping center on Upland Road.