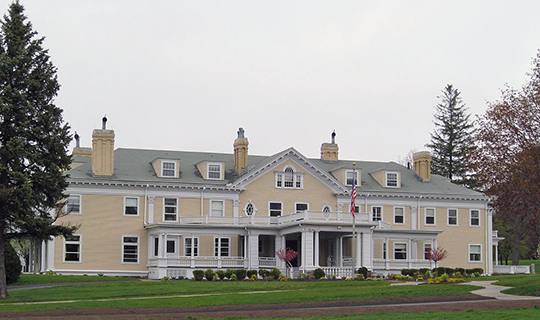 Dedham, the county seat of Norfolk County, is situated a little north of the center of the county. It is somewhat irregular in shape; is bounded on the north by the Town of Needham; on the east by the City of Boston; on the southeast by the Town of Canton, and on the south and west by the Town of Westwood. It is separated from Needham by the Charles River, and the Neponset River flows between Dedham and Canton. The town is well watered by these two streams and their smaller tributaries. The surface is generally rolling or hilly, and the soil is of a sandy or gravelly nature, not naturally fertile, but by careful cultivation it can be made to produce fair crops of the grains, fruits and vegetables adapted to this section of the country.

In May, 1635, the General Court gave permission to the people of Watertown "to remove whither they pleased, provided they continued under the jurisdiction of the court." Some of the inhabitants of those towns selected a location on the Charles River, and on September 3, 1635, the General Court ordered that: "There shall be a plantation settled about two miles above the falls of the Charles River, on the northeast side thereof, to have ground lying to it on both sides of the river, both upland and meadow, to be laid out hereafter as the court shall appoint."

The first settlement was made upon the new plantation in the fall of 1635 by people from Watertown and Roxbury. In March, 1636, the General Court appointed commissioners to set out the bounds of the plantation. The commissioners made their report on April 13, 1636. At that time it was a custom in New England for the settlers in a new community, before they were incorporated as a town, to form themselves into a sort of voluntary association and enter into an agreement to observe certain regulations until such time as the General Court should see fit to pass an act of incorporation. Pursuant to this custom, the settlers of the new plantation on the Charles River, soon after the bounds had been fixed by the commissioners.

Worthington's History of Dedham, published in 1827, says on page 31: "The celebrated John Rogers, of Dedham, in England, had been forbidden to preach before our first settlers came to this country. Many of his people emigrated to this country and several to this town. John Dwight and his son Timothy Dwight, John Rogers and John Page were of this number. From this circumstance we may suppose the General Court gave to this place the name of Dedham. The inhabitants requested the General Court to give it the name of Contentment, which name is written over the records of the first several meetings. It appears to me that the word well expresses the leading motives of the first twenty-four settlers in coming into this town."

The grant made to the Town of Dedham by the act of September 8, 1636, was princely in its proportions, though rather indefinite as to boundaries. South and east of the Charles River it embraced the present towns of Dedham, Dover, Foxborough, Franklin, Medfield, Norfolk, Norwood, Plainville, Walpole, Westwood, Wrentham, and nearly all of Bellingham. On the north and west of the river it included Needham, Medway, Millis, Wellesley, that portion of Bellingham on that side of the river, and parts of Natick and Sherborn. On the east the town extended to the grant of land to Israel Stoughton and others, and it was not until nearly a century afterward that the Neponset River was made the boundary between Stoughton (now Canton) and Dedham. The boundary line between Dedham and the towns of Dorchester and Roxbury was not definitely established for several years. Dedham might be appropriately called the "Mother of Towns," as more than half the towns in Norfolk County were included within the limits of its original boundaries, as well as a large part of the towns of Natick and Sherborn, in the County of Middlesex, and portions of Hyde Park and West Roxbury, which have since been annexed to the City of Boston.