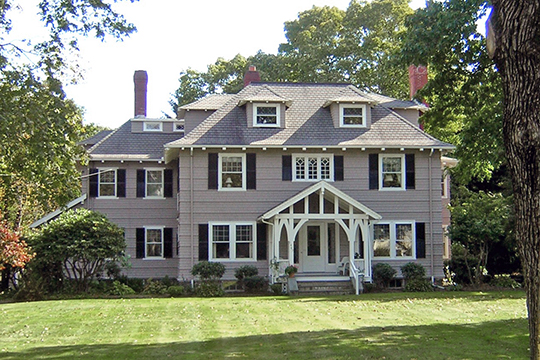 Long before its naming in 1797 the land beyond the Blue Hills was known as Ponkapoag by the Massachusetts Indian tribe. The word "ponkapoag" meant shallow or dry pond. For generations they fished and hunted the plentiful wildlife found along the Neponset River, its tributaries, and the surrounding uplands. Their Chief Chicataubut ruled when the Pilgrims landed at Plymouth in 1620. By 1646 Kitchamakin, Chiataubut's successor, allowed the Reverend John Eliot to begin preaching to the local tribe residing in Ponkapoag. In 1707, 6,000 acres, including what is now Canton, was set aside as a Native American community called the Ponkapoag Plantation. It was the second "praying town" set aside for Native Americans after nearby Natick.

William Ahauton (also know as Quaanan), one of the leaders of the Ponkapoag tribe, did much of the negotiating between the parties in the area and signed many of the deeds and agreements before his death in 1711. His wigwam/home was at the site of what is now the Canton High School. By 1725, there were thirty-eight families of European settlers living in the Canton area. The settlers continued to lease additional land from the plantation and by 1760 only 711 acres were left to the use of the Native Americans. By 1850 only 10 acres remained in the use of the descendents of the Massachusetts tribe. The last chief of this tribe was Jeremiah Bancroft, who died in 1924. The one-half acre graveyard off Indian Lane, a burial site off Chapman Street, the Burr Lane Indian Cemetery, and a few collections of artifacts are all the physical reminders that remain of their heritage. The land once known as Ponkapoag and the Blue Hills still hold importance for the living descendents of Native Americans, who occasionally schedule events in the area.

As more Europeans settled in Canton, more and more of the land was used for farming. The excellent soils meant that they harvested the "unusual luxuriant grass that grew thick and tall." Fruit orchards were also planted on the rich soils at the base of Blue Hill and near York Street. Other natural resources were also important: Peat was used for fuel, clay was used for bricks, bog iron was used for making iron, and sand and gravel were mined.

The first church meetinghouse was started in 1707 at the site of the cemetery in Canton Center. The oldest road is Washington Street, which runs from Cobbs Corner (where Canton, Stoughton, and Sharon meet) through Canton Center to the Ponkapoag Golf Course where it becomes Route 138 and continues north into Milton. Sections of the road were in existence in the mid-1600s although it wasn't called Washington Street until 1840.

The tributaries to the Neponset River were recognized as sources of energy to power mills. The first sawmill was built on the Canton River (East Branch of Neponset River) in the early 1700s. Gristmills, iron forges, and powder mills were soon added. By the late 1700s the Leonard and Kinsley Mill was making saws and scythes, and Paul Revere built the nation's first rolling copper mill and made Canton the center of the copper industry for many decades. Revere copper was used on the hull of the USS Constitution as well as on the Fulton, the first steam-powered warship. During the War of 1812 his company produced three tons of copper products per week. Cannons and howitzers were made for the Union Army during the Civil War. The company left Canton after several mergers in the early 1900s. The Revere Copper Yard and some of its buildings were taken over by the Plymouth Rubber Company located on Revere Street.

In 1834 the railroad line came to Canton and made it more desirable for commercial and industrial development. In 1899 the trolley line service made the town a fashionable bedroom community to Boston. Several large estates were built in the northern part of town, primarily along Green Street, Washington Street and Chapman Street. At the same time, more dense residential development occurred in South Canton and Springdale closer to the mills along the Canton River and its tributary streams and ponds. In 1851 the Draper Brothers woolen mill was begun, in 1860 Elijah Morse's Rising Sun Stove Polish factory started, and in 1911 the Plymouth Rubber Company became one of the town's major employers. Industry has remained an important part of Canton's economy. After the Second World War, Instron Corporation, a materials testing company, located in Canton and new companies continue to be attracted to the town.