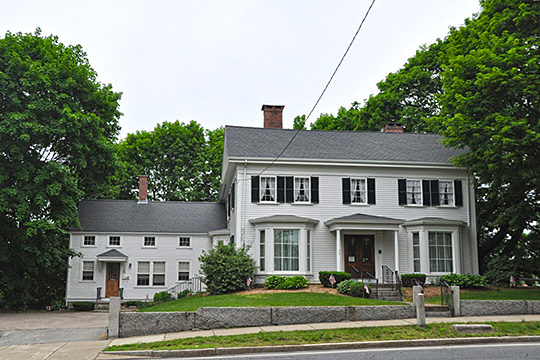 Walpole was settled ca. 1659 and incorporated in 1724. It was named for Sir Robert Walpole, English statesman. Situated on the Neponset River, it was well supplied with water-power, and a number of factories sprang up, turning out cotton goods, cassimeres, satinets, nails, farming implements, and paper. Today manufactures include building papers, shingles, roofing materials, and hospital supplies cotton, gauze, and paper. A handicraft shop, Homespun, at Lewis Farm, home of George A. Plimpton, uses Colonial methods in the making of cloth from the wool of its own cheviot sheep.

In front of the Town Hall is an old milestone dated 1740. The new brick Colonial Blackburn Memorial Building (indoor pool, tennis courts), on Stone Street, is part of an extensive Memorial Park. The Memorial Park Bridge was dedicated in 1924, on the 200th anniversary of the incorporation of the town, in honor of the Revolutionary soldiers, sailors, and nurses of Walpole.

On the corner of Diamond and East Streets is the Catholic Church, built of red brick with yellow trim in the Renaissance style. Nearby on East Street appears the unique plant of the Walpole Woodworkers, a company specializing in rustic woodwork.