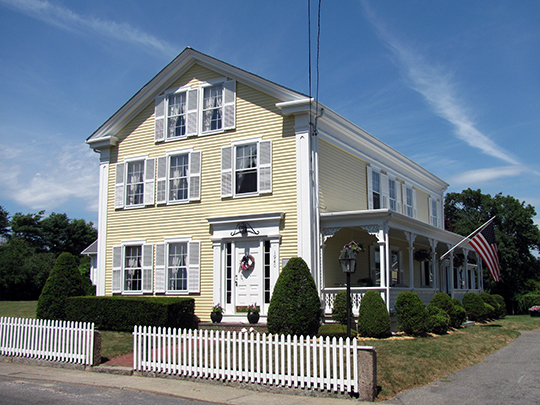 Bristol County is situated in the southern section of Massachusetts, its center thirty-five miles from Boston, and two hundred miles from New York. It is bounded on the north by Norfolk, and east by Plymouth Counties, on the south by Rhode Island and the Atlantic Ocean, and on the west by Rhode Island. Its area is about six hundred square miles. It was incorporated in June, 1685, bearing the name of its shire-town until 1746, when Bristol, Barrington, Little Compton, and Warren were set off to Rhode Island by a new division line drawn between the two States. In 1675 the county included but eleven towns, viz.: Attleborough, Berkley, Easton, Dighton, Dartmouth, Freetown, Raynham, Norton, Rehoboth, Swansea, and Taunton, aggregating a population of twenty-two thousand five hundred and seventy-one. Fall River, New Bedford, Acushnet, Fairhaven, Mansfield, Somerset, Seekonk, and Westport had not been incorporated.

Taunton was made the capital, or shire town, where courts were held until 1828, when New Bedford, having become an important seat of navigation, with a population of six thousand three hundred and thirty-two, the largest town in the county, by legislative enactment was created a half-shire town, with its courthouse and other county appendages. In 1860 another line was drawn, severing Pawtucket and a portion of Seekonk from this county, adding them to Rhode Island, and in exchange taking a portion of Tiverton to Fall River from that State. In 1877, Fall River having grown into an important manufacturing border city of forty-six thousand inhabitants, it was assigned by legislative grant the third seat of justice in the county, and a court-room fitted for that purpose.

The southern coast of the county is indented with numerous streams, inlets, bays, and harbor, affording great facilities for navigation, commercial intercourse, fishing, and maritime trade. Several rivers flow through the county,—Taunton River being the principal, taking its rise in Norfolk, flowing through the west part of Plymouth, draining the east section of this county, and emptying into Mount Hope Bay,— furnish motive-power, co-operating with steam, for the extensive manufacturing interests, especially cotton, iron, and jewelry. The surface of the territory is diversified, undulating, rocky, hilly, but generally level in the northern and western portion, with a sandy and clayey soil, not very productive, but in the middle and southern rather prolific. The geological formation, granite, carboniferous, feldspathic, conglomerate, etc., with frequent evidences of glacial visitations in past ages, from the numerous boulders observed in the central section of the country. Bog-iron ore is also largely developed in many northern locations, which from one to two hundred years ago was extensively utilized into bar-iron and cooking utensils.