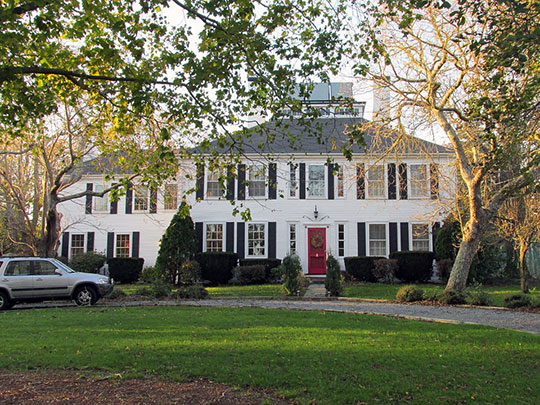 The first permanent English settlement within the territory which would become Barnstable County was made in 1637 on the site of the Town of Sandwich. We say permanent settlement because a trading-post had been established at Manomet ten years before. The settlement at Sandwich originated with Mr. Edmund Freeman and other citizens of Saugus, now Lynn. They obtained a grant of land from the authorities of Plymouth (4/3/1637) and at once, with a large number of families from Lynn, Duxbury, and Plymouth, removed to this location.

The second permanent settlement was made in the eastern part called Mattacheese, in the summer of 1639, and to it was given the old English name of Yarmouth. The names of the grantees were Anthony Thatcher, John Crow (Crowell), and Thomas Howes. These men occupied a prominent place in the affairs of the town for many years.

Closely following the Yarmouth settlement, and between Yarmouth and Sandwich, was the settlement of Barnstable. The grant was obtained in September, 1639, and in October several families from Scituate removed to the western part of Mattacheese, and laid the foundations for the shire town of Barnstable County. The only two persons mentioned in the grant are Joseph Hull and Thomas Mitchell. But many others were embraced under the term "associates." Among them were the pastor of the flock, Reverend John Lothrop, Anthony Annable, Henry Cobb, Thomas Cudworth, Samuel Fuller, George Lewis, Barnard Lumbard, Samuel Hinckley, William Crocker, William Parker and William Bourne.

The colony of Mattacheese was at first almost wholly composed of members of the Scituate church, who, with their pastor, settled along the southern border of the wide marshes extending eastward from Sandwich to the harbor of Barnstable.

At the end of 1639 there were but three English settlements upon Cape Cod: Sandwich, Yarmouth and Barnstable.

In 1685, Plymouth Colony was divided into three counties: Plymouth, Bristol and Barnstable. At the time, Barnstable included eight towns: Sandwich, Yarmouth, Barnstable, Eastham, Falmouth, Harwich, Truro and Chatham; but only the first four mentioned were fully incorporated. Barnstable was selected as the county seat, a courthouse erected, and offices of the court appointed.