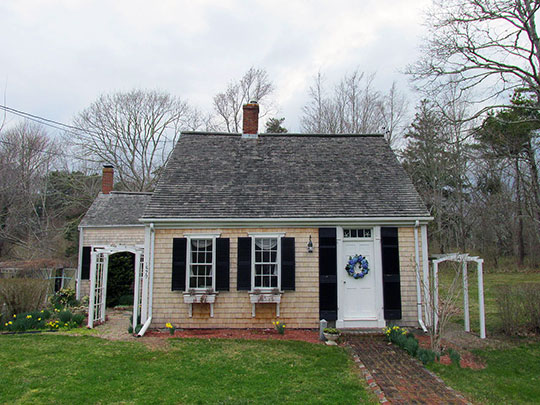 The record of Barnstable's earliest prehistoric inhabitants is preserved in archaeological sites scattered throughout the town. These archaeological sites indicate that Barnstable was inhabited by Native Americans from the end of the Ice Age (Paleo-Indian Period, 12,550-10,000 years ago) to the time of 17th-century European exploration contact (Protohistoric/Contact Period, 450-300 years ago). Sites indicate that early indigenous people roamed the land and sea coast, hunting game and gathering shell and fin fish. Later, permanent agricultural and fishing villages developed in the woodlands and along the sandy shores. These settlements and tribal bands formed a complex system of trails, cultural relationships and trading throughout southeastern Massachusetts.

European settlement of Barnstable began in the late 1630's, with the first settlers locating on the fertile land on the north side of town at what is now Barnstable Village. The town was formally established in 1639 with perhaps only 13 families forming the parish of Rev. John Lothrop. The first town meetinghouse was constructed in 1648 on Lothrop Hill.

The relationship between the early settlers and the Native Americans was peaceful. Lands for settlements were either purchased or bartered. The first land purchase in 1644, from the native Serunk, is today West Barnstable Village, the second, in 1648, from Nepoyetum, is Barnstable Village, the third, from Sachem Paupmumuck in 1648, obtained the land from Centerville to Cotuit, and the forth, from Sachem Yanno in 1664, is today's Hyannis and Hyannis Port.

The importance of Barnstable Village as the administrative center for the developing region was established in 1685, with the division of the Plymouth Colony and the creation of Barnstable County. Barnstable Village was selected as the county seat for the new area. For the first 100 years, land, and the governing of the town, was held in a "Proprietorship" system, having been given to the first comers. The division of common lands began in 1697, and most of the land was divided by 1725. The Native Americans remained on the land, but their numbers dwindled. By 1795, the proprietorship system of governing gave way to the Town Meeting form of government.

Over those 100 proprietorship years, the town grew to a population of 2,108 and was changing rapidly for that period of time. Route 6A, originally a Wampanoag trail, was designated as the first County Road. Agricultural settlement concentrated on the north side of town, while the south side of the town, known as the "South Sea Land", saw shipping and warehousing on Lewis Bay and shell fishing in Cotuit. Limited industrial development, consisting of grist and woolen mills, occurred in Barnstable Village, West Barnstable, and Marstons Mills. By 1750, the maritime industries, centered on Lewis Bay and Barnstable Harbor, dominated the town. Cotuit and Osterville became the local areas for oyster fishing in the bays.