Photo: Houses on the northern side of the 800 block of East Eighth Street, University Courts Historic District, Bloomington, IN. The Historic District was listed on the National Register of Historic Places in 2007. Photographed by User:Nyttend (own work), 2009, [cc0-by-1.0 (creativecommons.org/publicdomain/zero/1.0/deed.en], via Wikimedia Commons, accessed May, 2016. 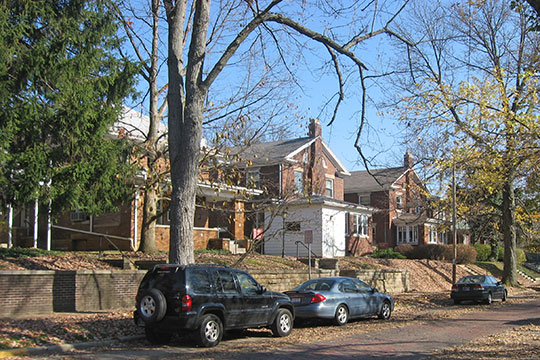 The history of University Courts [1] is linked to the growth of Indiana University after the first decades of the twentieth century. The four original subdivisions in University Courts Historic District were platted between 1910 and 1913 on land that formerly belonged to attorney and farmer Moses Dunn. The Dunn farmstead and acreage stood just east of the present neighborhood on the site of the Indiana University HPER building (the former Men's Gym). In 1883, after the fire at Seminary Square, the university began to construct a new campus on the Dunn farm. This immediately enhanced the real estate potential of all the adjacent land. The development at University Courts sought to capitalize on the proximity of what is now called the "Old Crescent." The original developers were Elvet and Cora Rhodes and the German American Trust Co. In 1913, the remainder of the land was sold to Thomas and Nettie Sare. Only the first three subdivisions are part of University Courts. The fourth subdivision, located to the east, is now a part of the Indiana University campus.

The comfortable, gracious homes in "The Courts" were built by developers, limestone men, and others whose fortunes were made in business and industry. Many were the homes of distinguished members of Indiana University's academic community. The houses were constructed predominantly out of brick and limestone in the popular period revival styles of the day. Georgian, Spanish Colonial and Mission styles dominated in the 1920s and Colonial Revival in the 1930s. The influence of the Arts and Crafts movement is also evident throughout the district. The builders spared no expense in construction, selecting the very best materials and including every "modern convenience." Slate and tile roofs were common. Some of the first detached automobile garages were built and carefully styled to match the residences. No fewer than 13 buildings were designed by noted Bloomington architect John L. Nichols, sometimes working with his son or brother. The district is characterized by a relatively high number of architect designed structures, reflecting both the affluence of its owners and the relatively greater number of practicing architects in the Bloomington market after 1920. University Courts can boast examples from at least 6 known architectural firms including Alfred Grindle, Edwin Doeppers, Burns & James, Merrit Harrison, Lowe and Bollenbacher, as well as Bloomington's own John L. Nichols. Thomas Sare personally developed 4 houses, all of which were designed by Nichols' firm.

The "Courts," in their heyday, were the modern alternative to the grand, but fusty Queen Anne residences on North Washington Street. For the first time auto storage was a consideration. Interior finishes became simpler and easier to clean. Built-ins limited the clutter of the Victorian homes. Migration to "The Courts" included representatives of Bloomington's most prominent families, some to retire to smaller quarters, some to raise families, some to enjoy additional income. Within the diverse housing in University Courts, most could find a compatible destination.

The Sigma Chi House, erected in 1906, and located just outside the boundaries of the district, is the only structure that predates platting of the area. It was the first building to be constructed by a fraternity for its own use at Indiana University. The current building has been heavily redesigned. Through the years, nine Greek Letter Societies were housed in University Courts. Most were originally built as single-family homes and later adapted as Greek houses. Beginning in the 1960s, a number of residences were also converted for use as offices by Indiana University. Much of the renovation has respected the interior and exterior of these houses and has helped preserve the district's historic character.

In University Courts, single family homes were interspersed harmoniously with duplexes and small apartment buildings. All retain a comfortable residential scale. Two examples of paired duplexes are located on corner properties. They were developed by families who also resided in the neighborhood. The wealth of architectural styles, rich variety of building materials, retaining walls, and Bloomington's only remaining brick streets create a charming and unique environment, a synthesis of "town and gown."

Besides well known Bloomington names like the Hoadley's, Johnson's, and Wicks, early residents of "The Courts" include Agnes Wells, Indiana University Dean of Women; William Rawles, Dean of the School of Commerce and Finance; Zora Clevenger, Indiana University Athletic Director; Joseph and Agnes Nurre, of the Nurre Mirror Plate Company; Chester and Ethel Tourner, of the Tourner Coal Company; Tunie Buskirk, widow of prominent Bloomington lawyer and stone man Philip Kearny "P.K." Buskirk; and Kenneth Williams, professor of mathematics and celebrated author of a five volume history of the Civil War, Lincoln Finds a General, among many others.

University Courts, a neighborhood originally intended to build on the strengths of its proximity to the University, suffered several damaging demographic changes starting in the 1960s. The area was further endangered by the adoption of the 1944 Master Plan which called for campus expansion in this area. Slowly, the original owners, who were mainly university professors and prominent local businessmen, began to age and sell their long-time homes. Many properties were converted to rentals or departmental annexes for the University The area which once housed distinguished professors, found itself increasingly defenseless in the face of maintenance issues and the clash between student and resident occupants. The struggle to preserve University Courts continued over more than three decades. As early as 1982 correspondence between President Ryan at Indiana University and Sybyl Eakin of the Historic Building and District Study Committee, show that the community was already concerned with the deteriorating condition of the brick streets in University Courts. In response, a local ordinance was passed to insure appropriate repair of historic brick streets which had been randomly patched with asphalt and cement.

The University Courts Historic District was nominated to the National Register of Historic Places in June of 1992, but was not listed until December of 2007, overcoming much opposition and controversy. The protracted effort to reconsider listing was spearheaded by long-time residents Sandi Cole and Jeannine Butler, who locally designated their own property in 1998 in order to renew public interest in the area. In 2004, the Bloomington Historic Preservation Commission locally designated the brick streets that are so significant to the character and atmosphere of the neighborhood. These are the only surviving streets of their kind within the city limits.