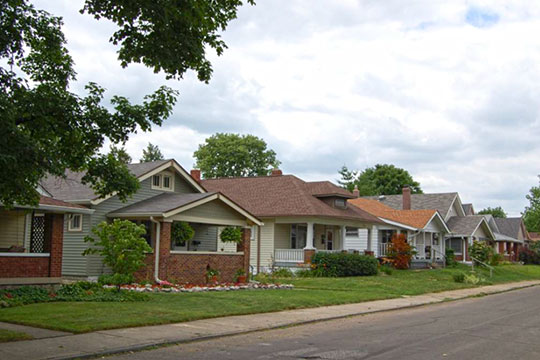 The Emerson Avenue Historic District was listed on the National Register of Historic Places in 2012. Portions of the content of this web page were adapted from a copy of the original nomination document. [‡]

Emerson Avenue Historic District is located about five miles due east of downtown Indianapolis in the Irvington area. Its 1899 plat is laid out in an orthogonal grid with most houses facing the east-west streets of St. Clair, North, Walnut and Michigan Streets. When platted and developed, the district was suburban in setting. Ellenberger Park (1909) borders the plat on the east and to the west, Emerson Avenue is a busy secondary street running north-south; it also forms the boundary between Center Township on the west and Warren Township to the east. The district is entirely residential, consisting of 142 contributing houses. Most houses are one to one and one-half story wood-frame bungalows and cottages dating from c. 1905 to the 1930s. Most houses feature front porches, dining room bays, deep eaves, and simple use of materials consistent with influence from the Craftsman style.

Most houses in the district are one story, wood frame bungalows, built from 1910-1930, even though the plat was filed in 1899. Single family homes predominate, but Michigan Street includes a higher number of doubles and one four-flat building. The district did include one commercial building, built ca. 1915, at the northeast corner of Michigan and Emerson. The City of Indianapolis condemned and demolished it in the spring of 2009. The intended housing market originally was clearly average middle class, probably aimed at a variety of blue and white collar middle income families.

The design of the plat, though not remarkable for its time, is nonetheless characteristic of a streetcar neighborhood. Its stone curbs, sidewalk placement, lot size and the placement of houses on their lots all constitute a contributing site within the district. The gridded plat of Emerson Avenue Addition is characteristic of Indianapolis streetcar suburbs, being the most common land division method used in connection with trolley-oriented suburbs in the city. The east-west streets are clearly dominant in Emerson Avenue Addition; this too is characteristic since the closest trolley line was an east-west line on nearby Michigan Street. The concept was to place most lots within equidistant reach of the trolley line; on the north side, similar plats are north-south oriented.

The development pace of the Emerson Avenue Addition probably lagged far behind expectations. About one-fourth of the lots were built on by 1916; by 1930, all but a handful of lots had been sold and occupied. Ultimately, the addition provided housing to a variety of middle and working class families.

Unlike the blocks to the north (in the North Irvington Gardens Historic District), the simple architecture of the frame bungalow was the dominant housing form in the Emerson Avenue Addition. A number of the district's houses were improved or altered as the modest means of the owners allowed. Yet, enough retain integrity to give the district its historical feeling.

Before about 1910, most Indianapolis home builders were content to provide variations of the Queen Anne cottage for potential customers. Several examples stand in the district, the L-plan cottage at 5130 E. St. Clair is among the best preserved in the district. In Indianapolis, a fundamental change took place in the years 1905-1910, after which the bungalow and the American Foursquare quickly became the new middle class model for housing. Pervasive literature about the Arts & Crafts house helped convince builders and homeowners. Well-publicized examples of new Craftsman inspired homes in Indianapolis provided direct proof of the simplicity and modernity of the new style. By 1909, the Indianapolis Star could claim that "the bungalow is here to stay." Indeed it was, at least until the 1930s, when the influence of the movement faded.

The district includes several well-preserved Arts & Crafts/bungalow style houses. The mirror image Craftsman houses at 5217 and 5223 E. North include all the requisite features of the style; simple massing, overhanging eaves, simple use of materials, large porches, and an avoidance of historical-themed details. The house at 5147 E. Walnut is a classic bungalow that retains a remarkable degree of integrity. Variety is part and parcel of the Craftsman movement; the double house at 5139-5141 E. North Street is unusual for its Prairie-like box massing combined with hip roof and stucco exterior, an uncommon format for a one story double house.

Emerson Avenue Addition Historic District changed very little both in social terms and physically. Many residents stayed for decades after building here. What started as a trolley subdivision aimed at blue collar families has evolved into a middle class section of Irvington, and remains so today.

The Emerson Avenue Addition was platted as part of Irvington. Located about five miles away from the soot and bustle of the state capital, Irvington was platted as an independent residential suburb in 1870. Jacob Julian, an attorney, and Sylvester Johnson, the Wayne County, Indiana, prosecutor, founded the community with the intent of creating a unique place in Central Indiana. The two bought the Sandusky farm, a 320-acre site astride the old National Road, and had their friend, Robert Howard, plan the community. Howard was the Wayne County, Indiana surveyor and an accomplished civil engineer. He made Julian and Johnson's vision of an ideal community a reality, laying out 109 lots of about 2 acres each, connected by winding streets, a oval-shaped public park, and a site for a college.

By 1873, Johnson and Julian had moved their families into spacious new brick mansions located in the heart of the development. Irvington incorporated as a town that year. The community's leaders had one final but very significant accomplishment for the year 1873.

Northwestern Christian University, a small but thriving liberal arts institution, had held a competition for a new location that year. Irvington won, and in 1875, the school moved into its newly built brick main building on the east edge of the small town. Later known as Butler College, then Butler University, the school set the tone for much of the feel of the town in the following decades. Butler made Irvington a college town as well as a suburban residential community. Though the town had a disproportional number of professors, students and university staff among its residents, research has shown that Irvington had a fair amount of diversity. Though the town's population numbered below 1,000 until about 1900, residents included carpenters, repairmen, and even a few farmers in the first few decades of its existence. Like any small town, these residents found a niche that permitted survival and opportunity.

Transportation helped transform Irvington into a streetcar suburb. At first, Irvington's leaders hoped the steam train would provide all the necessary linkage to Indianapolis. The 1870 plat set aside a lot for a depot on the Pennsylvania Railroad. Also, a hack provided horse-and-buggy transport to downtown via the National Road (Washington Street). Dissatisfied with these options, Irvingtonians created their own streetcar line, The Irvington, Stratford, and Indianapolis Railroad

Company, in 1875. The line ran east on English Avenue, entering Irvington at its southeast corner. Though its efficiency was often notoriously lacking, this mule-drawn line served the community until 1888, when Citizen's Street Railway extended a line down East Washington Street to Irvington. In the early 1890s, Citizen's installed electric cars that were much more reliable. Irvington had become a leading streetcar suburb by the turn of the 20th century. Residential development and trolley service went hand-in-hand in Indianapolis from 1869, when Citizen's Street Railway was founded, to 1930. After about 1920, developers platted newer sections of Irvington with the understanding that most residents would be auto owners.

More relevant to the Emerson Avenue Addition was the Michigan Street trolley line. By the late 1890s, Citizen's had extended an existing East Michigan Street line all the way to Emerson Avenue. This opened building sites up to 10th Street, an acceptable five block walk. The trolley would continue to serve many residents of Emerson Avenue Addition, only a portion of which had the means to afford a car. Census and city directory research shows that most residents were skilled laborers. Railroad employees and skilled positions such as auto industry machinist were well represented in the early decades of the district's existence, as were skilled professions like teacher, draftsman, newspaper printer, newspaper reporter, and tailor.