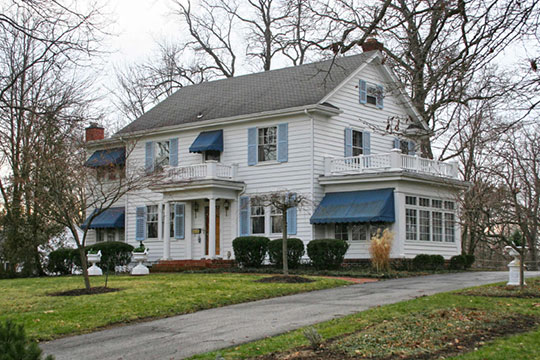 Wildwood Park is an outstanding example of a residential suburban development that introduced important trends and design principles regionally and locally, and was particularly influential as a prototype for subsequent design in Northeastern Indiana, as it introduced curvilinear design, deed restrictions, and an architectural control committee. The District is an intact example of an early Automobile Suburb, with interrelated and associated residential subdivision and parkway.

The Wildwood Park subdivision is located on the former Hoffman farm; an area of rolling hills associated with the glacial Little River and its banks. The subdivision slopes toward a former wetland area located along the south edge of the boundary at Portage Boulevard. Portage Boulevard was named for its use as the portage between the Wabash and Maumee River systems. The Wabash and Erie Canal (1834-1880) was constructed along the line now occupied by Portage Boulevard, which is situated on the location of the old canal towpath. The Wildwood Builders Company organized the Wildwood Park Company in December, 1913, to purchase and develop the Wildwood Park subdivision. The historic relationship of Wildwood Park to the growth and development of Fort Wayne is evident through its placement along the western boulevard proposed by George Kessler in his 1912 plan for Parks and Boulevards; it also adjoined the older Upper Huntington Road and Illinois Road, which were the primary routes to Fort Wayne from the southwest and west. In addition, the Hoffman's farming operation had not significantly altered the forested areas of the parcel, which consisted of rolling hills; remnants of glaciation and the Little River Valley (part of the Wabash River system).

The Wildwood Park subdivision area is lighted by a system of public street lamps on all interior roads. Exterior roads are lighted by standard primary roadway traffic lights not included as part of the residential street lamp system. There are a total of 35 historic residential street lamps remaining in the subdivision. Seventeen of these match a 1917 advertisement illustration showing a close up of the original street lamp design, consisting of a mission-style faceted lamp globe with multiple (perhaps 6-8) panes of glass between cap and base, on a fluted post that flares near the ground. Although the lamp globes were subsequently changed to a common shape used throughout the city of Fort Wayne, 17 of the original flared posts still exist in the original plat area. As additional areas were platted and improved, a variety of bases were used during the period of historic significance. Today, the 35 historic bases of various designs, with a standard lamp globe are found throughout the residential area, and are counted as one contributing structure/system in the historic district. The larger street lights on Freeman, Portage, Ardmore, and West Jefferson are modern, and are not included in the contributing structure/system.