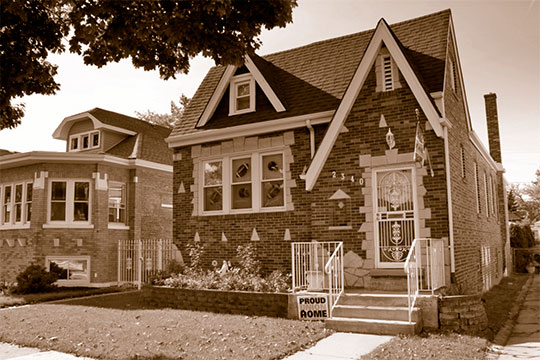 The Central Berwyn Bungalow Historic District was listed on the National Register of Historic Places in 2015. Portions of the content of this web page were adapted from a copy of the original nomination document. [‡]

The Central Berwyn Bungalow Historic District is a cohesive neighborhood of Chicago Bungalows and other housing types and styles typically found in the residential neighborhoods of Chicago and its inner-ring suburbs. [see: Early Automobile Suburbs, 1908 to 1945] Its period of significance begins in 1900, when many of the first homes were built, until 1949 when the last Chicago Bungalow-styled homes and other bungalow types were last constructed. While most homes in the district are the typical Chicago Bungalow constructed for working and middle class homeowners, there are many "higher-end" homes along Riverside Drive that are exceptional examples of the Chicago Bungalow and other architectural styles of the early 20th century. The district was largely constructed during the mid-1920s for a number of ethnic groups, most especially Czech immigrants and the first generations of Czech-Americans moving west from Chicago and Cicero neighborhoods along the 22nd Street (Cermak Road) commercial corridor. Cermak Road was originally known as 22nd Street when it was named after Anton Cermak, the first Czech mayor of the City of Chicago.

The Chicago Bungalow is a house type that developed in Chicago and the Great Lakes region. Based on the one story bungalow that became popular in many cities at the turn of the 20th century, the Chicago Bungalow was adapted to fit the regional conditions of site, climate, local building codes and available building materials. Chicago Bungalows are of brick construction, with hipped roofs, rectangular in form and built on narrow urban lots. Within the general Chicago Bungalow building type, however, there are numerous style and subtype variations within the district, making it perhaps one of the most comprehensive collections of Chicago Bungalow subtypes within the Chicago region.

It was the construction and extension of streetcar lines during the 1890s and afterward that made Berwyn an attractive residential suburb given its proximity to employment centers in Cicero, Chicago and other nearby communities. The first streetcar line opened by the Suburban Railroad Company in 1896 and mostly served the neighborhoods near the CB&Q Railroad. An extension of the line north along Harlem Avenue was planned, and would have connected central Berwyn to the CB&Q and the Village of Oak Park. However, the land around Harlem and Cermak was a tree farm owned by the City of Chicago, which supplied its park trees. Chicago refused to provide an easement at the time and the line was not extended.

According to an article in the Berwyn Beacon, the area encompassing the Historic District started developing in 1921, making it one of the last areas in Berwyn to see new growth. The majority of homes in the district date from the mid-1920s, although there are numerous homes scattered throughout the district dating between 1900 and 1920. The district's building boom in Berwyn peaked in 1927.

One of the earliest Czech developments in Berwyn occurred near the intersection of Ridgeland Avenue and 26th Street in the early 20th century. While a significant amount of residential construction occurred south of 26th Street and outside of the present district during this time period, some of the earliest homes in the district are located near 26th and Ridgeland, especially in the 2500 blocks of Gunderson and Scoville Avenues. Joseph Donat had a four-block subdivision along the north side of 26th Street extending between Ridgeland to East Avenues. Since it was one of the first blocks to be developed in the district, a small commercial district emerged along 26th Street near the present-day Hiawatha School (6539 26th Street), first built in 1912. Two other district subdivisions were developed before 1913. Groh & Christian's subdivision consists of an eight-block neighborhood bordered by Ridgeland and East Avenues, Cermak Road and 24th Street. The other subdivision was developed by Gustav Klima encompassing the blocks south of Cermak Road between Wesley and Oak Park Avenues. However, even these early subdivisions were not fully built out until the mid-1920s.

Developers like Cermak and Novotny obtained financing from Czech-run banks and building and loans and sold lots to builders and contractors and to individual lot owners. As they gained an investment return, developers purchased more land, which in turn, fed the profits and growth of local financial institutions by providing mortgages to new homeowners. While most of these financial institutions were originally located in Chicago and Cicero, the housing growth in Berwyn enticed new banks to open along Cermak Road, the most prominent of these being the American State Bank.

One noted early developer in the district was Gustav Klima, a Czech immigrant who arrived in the United States in 1889. He first worked as a mechanic but by 1901 he had founded the Bohemian Plate Glass Insurance Association. In 1906, he became Secretary of the Bohemian Mutual Fire Insurance Company, and by 1913, he had purchased a large tract of land in the district, bordered on the north by Cermak Road, Wesley Avenue on the east, Oak Park Avenue to the west and 24th Street on the south. While not a large tract of land, it is located in the center of the district and includes the east end of Riverside Drive. By 1920 there were several homes built along Riverside Drive and on Euclid Avenue. Klima himself lived in a two-story brick home at 6723 Riverside Drive and likely built by neighbor Richard Dusil (6714 Riverside Drive). Many of the early residents were tailors and machinists, skilled laborers that would form the working class backbone of the neighborhood. A 1917 article on Kilma described him as "one of the best known and most popular men in our (Czech) community." The same article noted that "he became active in the real estate business and sold property in the neighborhood of Riverside Drive, 22nd Street and Oak Park Avenue. He transformed this section of Berwyn into a residential district for his Czech fellow countrymen.

Henry Groh, another early developer in the district, maintained a home and business in the 6400 block of Cermak Road in the 1910s and '20s. It appears he focused his business solely on real estate and also served as Collector for Berwyn from 1918 to 1922. Groh partnered with a man named Christian to develop a large tract of land at the northeast corner of the district. Many of the district's earliest bungalows were built in the Groh & Christian Subdivision during the late 1910s.

Within the Chicago metropolitan region, it is estimated that perhaps as many as 100,000 Chicago Bungalows were built in the City of Chicago alone. Within the district, the Chicago Bungalow is the dominate bungalow style type. The bungalow's origins come from India; in fact, the name derives from the Indian cottage known as the "bangla" or "bangalo." In India, the bungalow referred to a temporary structure surrounded by a veranda to allow for adequate air circulation. It was brought to the Western world by English colonists and eventually found its way to the United States. The earliest American bungalows were summer homes along the eastern seaboard in the late 19th century. After 1900, the bungalow transformed into a permanent home for middle and working-class families. In that regard, its origins as an economical means of single-family housing were in California, but it quickly spread nationwide.

By the 1920s, many middle-class families were able to buy an automobile and a detached garage was an integral component of a bungalow site. Garages were typically accessed from the alley in the district, although there are a few properties with driveways. Various Czech publications promoted the ability to have private garages for Berwyn bungalows and having an automobile provided not only transportation options, but status. While some of the garages in the district are of brick construction, most are inexpensive wood frame structures.

Many of the Chicago style bungalows in the district that feature flat parapet fronts have some characteristics of the Romanesque Revival style. Though very loosely associated with the style, these homes nonetheless feature castellated parapet walls and brick masonry with simple stone and brick detailing. The homes at 2219-23 Grove Avenue are typical. A few such houses feature arched entry porticos.

The Spanish Mission Revival was popular in the 1920s as California and the Southwest United States grew in population and people traveled there by train for business or pleasure. The Spanish Mission Revival was loosely based on the original Spanish missions of the Southwest in California, Arizona and New Mexico. Those original missions varied considerably in form, materials and detailing due to local conditions and available materials. Most Spanish Mission Revival is based on the California missions and feature red tile roofs, arched porches or porticos, stucco cladding, projecting vigas and curved parapet walls. In this district, two Chicago Bungalows at 2418-20 Elmwood Avenue feature some of those characteristics. They have a front slanted roof clad in Spanish red tile with end parapets and an arched entry portico.

The Colonial Revival style is represented in both Chicago Bungalow and other building types in the district. Several Colonial Revival bungalows are located along the 2500 block of East Avenue featuring front gable bays with a fan light window placed above the first story window bays. The 2500 block of Elmwood Avenue features several Chicago Bungalows with Gambrel roofs. Other non-bungalow Colonial Revival examples include two-story homes with Dutch gambrel roofs and Classical porch columns. The house at 6837 Riverside Drive is a typical example. The house at 2341 Clinton Avenue is a stucco-clad, two-story home with a side Gambrel roof and portico with Classical columns and a balustrade. The entry features a paneled door and sidelights.

Another common style in the district is the Tudor Revival, most of which are bungalows. These homes have distinctive Tudor or English Cottage style characteristics such as steeply pitched roofs, rough-cut stone door and window surrounds and arched doors. The steeply pitched roof is often at the entry bay and is perpendicular to a side gable roof. Though stylistically based on English cottages, they have the same Chicago Bungalow layout and should be considered as a common bungalow type. Numerous examples, some more complex than others, are found throughout the district. A simple example is at 2520 Oak Park Avenue. A row of more stylistically complex bungalows are in the 6900 block of Riverside Drive and feature steeply pitched gables that extend all the way to grade, wood vergeboard, and battered walls. An excellent example of the Art Deco/Moderne style is an apartment building at 2348 Euclid Avenue. It features simple geometric lines and ornament and porthole windows as well as a slightly streamlined character with horizontal bands that wrap the corner.

A few other styles are found in small samples throughout the district. These include the Italian Renaissance style, which features light-colored brick, terra cotta ornamentation and clay tile roofs. The best examples are found at 6945-49 Riverside Drive as well as the original St. Odilo Church and School.

The period of significance for the Central Berwyn Bungalow District is from circa 1900 through 1949. This period covers the rapid development of the district in the 1920s, but also recognizes construction and development prior to and following the boom. Some of the earliest homes date from the first decade of the 20th century and represent pre-bungalow building types and development patterns. Development increased in the 1910s and especially after World War I. Some of the earliest Chicago style bungalows were built in this period. The 1920s saw the most substantial growth and was evenly distributed throughout the district.

Following the onset of the Great Depression in 1929, building slowed but continued with various infill of lots mostly with Chicago Bungalows and Tudor Revival style bungalows. This development and construction pattern continued through World War II. In the late 1940s, most new construction followed the style and type of the pre-War era.