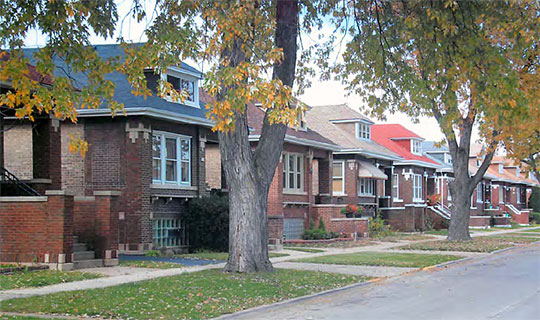 The City of Berwyn is located less than two miles west of Chicago's municipal boundaries and eight miles from the Loop. The land encompassing Berwyn was once swampland used by the Pottawattamie Indians for hunting grounds and as a portage between the Chicago and Des Plaines Rivers. When the Illinois-Michigan Canal was built just to the south in the 1830s and 1840s, European settlers began to clear the land of what is now the southern portions of Berwyn. Theodore Doty purchased a large tract of land in 1846 from the Canal Commission and built a plank road along a portage trail that is now Ogden Avenue, one of Berwyn's major thoroughfares. The Canal, completed in 1848, and the plank road that connected the fledgling town of Chicago with Ottawa 80 miles to the southeast at the confluence of the Fox and Illinois Rivers, provided access through Berwyn that in turn attracted more settlers and land speculators in succeeding decades.

Berwyn was incorporated as a village in 1902 after a vote to separate from Cicero Township. In 1908, the village was incorporated as a city. The new boundaries encompassed both the north and south settlements and extended from Roosevelt Road as its northern boundary to Pershing Road to the south. Berwyn shares its eastern boundary with the Town of Cicero at Lombard Avenue; Harlem Avenue is Berwyn's western boundary. Berwyn continued to experience significant population growth after its incorporation, although it remained focused in the far northern and southern portions of the city.

It was the construction and extension of streetcar lines during the 1890s and afterward that opened up other areas of the city to development, making Berwyn a more attractive residential suburb given its proximity to employment centers in Cicero, Chicago and other nearby communities. The first streetcar line opened by the Suburban Railroad Company in 1896 and mostly served the neighborhoods near the C B & Q Railroad. An extension of the line north along Harlem Avenue was planned, and would have connected central Berwyn to the C B & Q and the Village of Oak Park. However, the land around Harlem and Cermak was a tree farm owned by the City of Chicago, which supplied its park trees. Chicago refused to provide an easement at the time and the line was not extended.