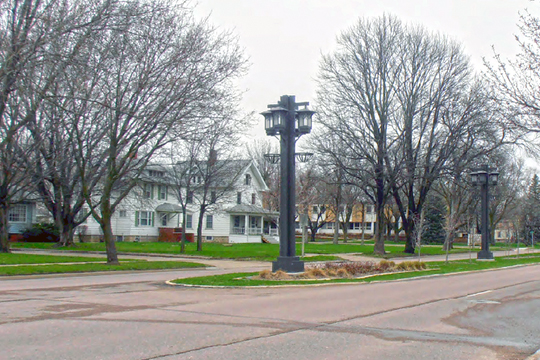 The North Grand Avenue Residential Historic District was listed on the National Register of Historic Places in 2014. Portions of the content of this web page were adapted from a copy of the original nomination document. [‡]

The district is distinct due to the 75 foot setback that is visible on all lots north of 11th Street. There is one block that is included in the district (9th to 10th) which is part of the Railway Addition and therefore does not have the same setback as the rest of the district. The district is primarily residential. However, within the North Grand Avenue Residential Historic District are four churches representing various religious affiliations. Three of the four churches are contributing to the district. Both 1st Avenue East and West, which are adjacent streets to Grand Avenue are partially included in the district as they have a high concentration of similar architectural features as the houses on Grand Avenue. Within the community, Grand Avenue is also United States Highways 71/18. It is highly maintained as a tree-lined street with additional landscaping. The trees are predominately large varieties of mature deciduous and coniferous trees. A landscaped boulevard dissects the north and south bound traffic. There are noncontributing Art Deco light fixtures with flower baskets that are spaced equidistant in each section of the boulevard. Additionally, the center of the boulevard is landscaped with small trees, native grass, and flowers. Mowed grass fills in the area from the curb of the boulevard to the center where the additional landscape elements are visible. The front lawns of the houses are manicured and generally landscaped. There are sidewalks on both the west and east sides of Grand Avenue that are parallel to Grand Avenue/Highways 71/18.

The North Grand Avenue Residential Historic District demonstrates the influence of styles and trends which is evident as one would traverse the district from the southern boundary to the northern boundary. The district is a local example of boulevard and residential design influenced by the City Beautiful Movement as well as shaped by the prosperous agriculture of the area.

The original 1871 plat of Spencer was twelve square blocks. Main Street, running north and south, was platted as 100 feet wide, while others were 66 feet wide. Early residences were modest structures. This original plat was essentially the entire town until the Chicago, Milwaukee and St. Paul Railroad arrived in 1878.

Additionally, the arrival of the railroad marked "an important epoch in the history of Clay County when slowly but gradually Spencer and the county put on a new appearance ... Houses sprang up; new arrivals came on every train; trade was given a fresh impetus; farmers were receiving better prices for their stock and produce ... The change was marked and great." The prospects for Spencer grew brighter than ever before in its history. The extension of Main Street (later named North Grand Avenue) to the north continued the linear plan of the original plat with the Griffin & Adams Addition.

The development of North Grand Avenue Residential Historic District (State Highway 71/18), was integral to the development of Spencer and the agricultural needs of the region. In 1893, Main (later known as Grand) was included on the first Sanborn Fire Insurance Map of the area; however, no houses were included north of 7th Street on that Map. Main was primarily a transportation corridor.

The Griffin & Adams Addition was laid out in 1884. This addition covers the 1100-1800 blocks of North Grand Avenue. Houses built in the Griffin & Adams Addition on North Grand Avenue were subject to several conditions and restrictions. They are as follows: "That the front one-third of the said block ... fronting Main Street shall contain no buildings except the residences of said ... owner and his grantees, and such residences shall be built and erected not nearer than 75 feet from the front line of said block and if said conditions and restrictions shall be in any wise violated by said ... owner or his grantees, then this deed shall be null and void, and the title hereby conveyed shall at once revert in Griffin and Adams, together with all improvements thereon, without pay or compensation from said Griffin and Adams."