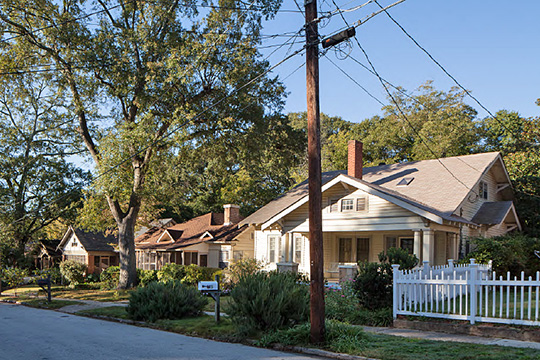 The McDonough-Adams-Kings Highway Historic District was listed on the National Register of Historic Places in 2013. Portions of the content on this page were adapted from a copy of the original nomination document. [‡]

The McDonough-Adams-Kings Highway Historic District (MAK) is a residential neighborhood located south of downtown Decatur. Houses in the district date from the early through the mid-20th century. A majority of the houses were built between 1910 and 1940 and retain a high degree of integrity. Common house types in the district are Bungalow, American Small House, Ranch House, English Cottage, American Foursquare, and Georgian House. The common architectural styles are Craftsman, English Vernacular Revival, and Colonial Revival. Twenty-one houses are designs by Atlanta architect Leila Ross Wilburn, who published numerous pattern books for houses in the first half of the 20th century.

The city of Decatur was incorporated in 1823, the same year it was designated as the DeKalb County seat. In 1900 city leaders expanded the boundaries of Decatur to a half-mile circle centered on the courthouse to spur the growth of the city. This expansion brought the northern half of what would become the MAK district within the confines of the city. The neighborhoods that grew out of this expansion came to be known as "Little Decatur."

The district consists of four separate areas based on developmental history. West College Avenue has houses constructed from the late 1800s to ca. 1900. These houses are unique to south Decatur. They represent the era of residential development when houses hugged the railroad tracks, their transportation lifeline. After the advent of the streetcar and the automobile, development spread south, no longer restrained by the need to be near the railroad. Kings Highway primarily contains Craftsman-style houses constructed between 1910 and 1940. The third area consists of Adams Street and South McDonough Street. Mayson & Weekes, a local partnership begun for the purpose of developing this area, intended for Adams Street to be the most exclusive street in the neighborhood. The fourth area is the section between West Davis Street and Oakview Road, historically owned by the Scott Investment Company and developed in the late 1920s.

Contributing houses are predominantly Craftsman-style Bungalows, two-story American-Foursquare houses with Colonial Revival, Prairie, or Craftsman-style details, and American Small Houses with Colonial Revival or English Vernacular Revival style details or no academic style. The district also includes cottages of Queen Anne and English Vernacular style or no academic style, and Ranch houses, plus a selection of other period house types and styles such as Folk Victorian. Except for Kings Highway, which is notable for its collection of intact Craftsman-style Bungalows, the district is an eclectic mix of styles throughout, with no particular style dominating in any section of the district.

By mid-century, the neighborhood was built out, and transition set in. The rise of automobile traffic, especially along West College Avenue and South McDonough Street, impacted the residential character of the neighborhood. Several of the older houses, especially the early two-story Queen Anne style residences along West College Avenue were subdivided and became rental units. Agnes Scott College expanded its campus, purchasing residential property along West College Avenue, South McDonough Street, and Adams Street and demolishing some of the houses to make room for new buildings. The mid-1960s appear to be pivotal years for the neighborhood, as it, the City of Decatur, Georgia, the Southeastern region, and the entire nation grappled with the ramifications of the Civil Rights Movement. Several of the house histories note a change of ownership or a change from owner-occupied to rental during this decade, especially in 1965, but others indicate that long-time owners remained in their houses. Still, demographically, the area became more diverse, and interviews with long-time residents indicate that the transition was not always pleasant. The neighborhood was galvanized into action in 1971 when Agnes Scott College and the City of Decatur Commissioners supported a plan to relocate and widen State Route 155, changing it to four lanes and running it up Adams Street, which would have wiped out all of the houses along that street. Thanks to stiff neighborhood resistance, the plan was shelved, but, in 1972, in the blocks bounded by West College Avenue, Adams Street, Ansley Street, and Kings Highway, including Leila Ross Wilburn's house, 27 houses were condemned and demolished to facilitate the construction of a new city school, Renfroe Middle School.

The local development firm of Mayson & Weekes bought extensive property within the neighborhood and began buying land ca. 1907. Houses within this development were originally required to be two-story; therefore most two-story houses are located in the north end of the district where the earliest construction occurred. This height requirement was dropped early on, making possible the construction of one-story infill housing such as the Craftsman-style Bungalows and English Vernacular Revival-style cottages.

Leila Ross Wilburn, Georgia's second female registered architect, was hired by Mayson & Weekes to design speculative houses for their new development along South McDonough Street, Adams Street, and Kings Highway between 1910 and 1914. Many of her designs for this development were later published in her plan books. Wilburn's designs ranged from two-story Classical Revival-style houses through Craftsman Bungalows to Ranch houses, all of which are represented in the district. The oldest extant Wilburn-designed house in the neighborhood is located at 205 Adams Street and was constructed in 1912. It is a two-story Classical Revival-style house.

Wilburn's two-story American Foursquare-type house is well represented in the district. Examples include 338 Adams Street, 309 Adams Street, and 213 Adams Street. Additionally, other houses in the district exhibit design characteristics favored by Wilburn. Typical characteristics of her work include: columns on cut-granite pedestals, porte-cocheres, trellis work (frequently in combination with paired columns), terraces (alone or in combination with porches) and bracketed cornices. Most of the houses are wood-framed, though a few are brick, and many of the Craftsman-style Bungalows have masonry porch supports or other decorative details.

The common architectural styles in the MAK district are Craftsman, English Vernacular Revival, Prairie, and Colonial Revival. Style refers to the applied ornament on a building. Most houses in Georgia have some elements of a defined style and can be said to have "elements of a style" or a "vernacular interpretation" of a style as defined in Georgia's Living Places: Historic Houses in their Landscaped Settings, a statewide context.