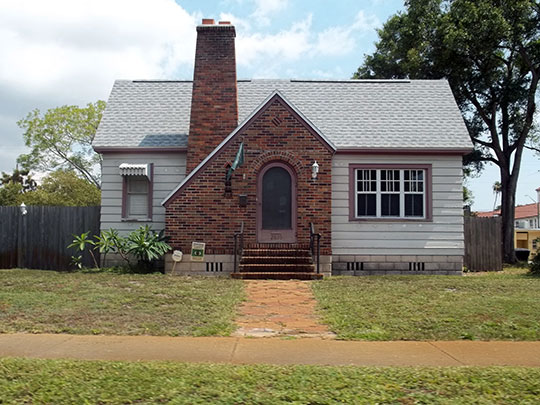 Conceived and publicized almost solely as a winter resort, St. Petersburg's leading industry is its tourist business. Its healthful location was approved as early as 1885 by the American Medical Association, when one scientist completed records at Pinellas Point showing the peninsula to be one of the sunniest regions in the United States.

Narvaes, Spanish explorer and commissioned governor of Florida, landed in 1528 somewhere along the Boca Ciega waterfront and marched across the peninsula to Tampa Bay; but the first recorded white settler did not arrive until 1843, when Antonio Maximo set up a fish "rancho" on a point of land at the southern extremity of the peninsula, now called Maximo Point. When his holdings were swept away by a hurricane five years later, he disappeared. The first house inside the present city limits was built in 1856 by James K. Hay, who came to look after hogs and cattle for Tampa stockmen.

Upon the outbreak of the War between the States, Union blockaders stopped fish shipments, shelled one of the houses and drove most of the inhabitants to Tampa. A few returned at the end of the war, were joined by squatters, and resumed their former occupations of fishing and farming. Some of the first citrus groves were planted at this time. By 1876 a small community, christened Pinellas, had sprung up around Big Bayou, several miles south of Central Avenue; a post office was established, boat service to Tampa was inaugurated, and the settlement became the largest on the peninsula.

John C. Williams of Detroit, St. Petersburg's founder, acquired acreage in 1876 which became the nucleus of the city. Williams, later given the honorary title of "General," cleared some of the land and attempted to farm, but finally turned his efforts to urban development. He made a deal with Piotr Alexeitch Dementieff, a Russian exile of noble birth who simplified his name to Peter Demens upon his arrival in Florida, offering him an interest in the land to build a railroad into the territory. The Russian's road, known as the Orange Belt Line, reached St. Petersburg from Lake Monroe, near Sanford, in 1888, when the community had a population of 30.

Williams and Demens, according to the most popular story, tossed a coin to decide upon a name for the new town. The Russian won and the settlement was christened St. Petersburg in honor of Demens' birthplace. Later, Williams built the first large resort hotel at the corner of Central Avenue and 2nd Street, calling it The Detroit, for his home town. Williams died in St. Petersburg in 1892; Demens went to California in the 1890s and never returned to the city he named.

St. Petersburg, with a population of 300, was incorporated in 1892. Among early settlers were British from the Bahamas and Key West, later joined by pioneers who arrived in response to land exploitation campaigns in England. From adjoining southern States came agriculturalists, many of Scottish ancestry.

Except for its one railroad, which became a part of the Plat System and later was absorbed by the Atlantic Coast Line, the peninsula was still isolated. Known as West Hillsborough, it remained a part of Hillsborough County until 1911, when Pinellas County was created and the first major land boom got under way. Central Avenue and a streetcar line were extended westward to Boca Ciega Bay and the city took in a mile-wide strip paralleling it. Thousands of lots in this territory were sold from a plat at a tent auction, the most spectacular sale in the history of the city, not excepting those of 1924-1926 boom days.

The resort remained a one-railroad town until 1914, when the Tampa and Gulf Coast Railroad, later taken over by the Seaboard Air Line, reached the city. By 1920 St. Petersburg claimed more than 14,000 inhabitants, and the population increased to 50,000 five years later. Miles of new roads were constructed, dozens of subdivisions laid out, and several million-dollar hotels erected. A ferry began operating to Manatee County, making possible a direct route to southern points, and the Gandy bridge, spanning upper Tampa Bay, provided a short cut to Tampa. Two free causeways were built across Boca Ciega Bay to bring a belated boom to the long neglected islands. Building permits during 1924-1925 reached a high total of $25,000,000. Meanwhile, in an extensive landscaping program, miles of Tampa Bay waterfront were filled in, improved with sea walls and promenades, and transformed into a string of municipal parks. In 1939 Central Avenue was extended by means of a causeway across Boca Ciega Bay to the island Gulf Beaches.

St. Petersburg, occupies a semi-isolated area of 58 square miles on the southern tip of the Pinellas peninsula, a 25 mile projection between Tampa Bay and Boca Ciega Bay. US Route 19, entering from the north, is its only free trunk highway. A toll bridge provides connection with Tampa on the east, and a ferry, crossing the bay on the south, carries traffic from central and southern points. Because of tolls the city is sometimes referred to as a pay-as-you-enter playground.

St. Petersburg's front yard is a series of landscaped parks and driveways paralleling Tampa Bay, a filled-in stretch of 2 miles embracing the city's harbor, yacht basins, municipal pier, and major recreational attractions. North and west of the pier lie North Shore, the pioneer residential section, and Snell Isle. The latter, dredged from the bay, is reached by a short bridge over Coffee Pot Bayou. Both are planted with a variety of palms, Australian pines and subtropical shrubs. Northward, following the irregular, pumped-in shores of Tampa Bay, is Shore Acres.

Five miles south around Pinellas Point, a newer residential district occupies the site chosen by the town's first white settler and overlooks the main ship channel leading into the Gulf. Bordering the bay to the southwest is Gulfport, a wedge-shaped municipality, its streets a continuation of St. Petersburg's, and served by the latter's trolley lines. Carved from the jungled western border of the peninsula, homes, many built upon Indian mounds, face shallow Boca Ciega Bay, across which lie the shimmering sand keys that are the city's Gulf bathing beaches. A green wall of citrus groves and open pine woods form much of the northern border.

Although many Florida resorts feature their abundant sunlight, St. Petersburg alone has been shrewd enough to capitalize on "Old Sol" and to spend a million dollars advertising itself as the "Sunshine City." To make the name authentic, the publisher of the city's afternoon paper announced that he would give away his entire edition every day the sun failed to show its face up to 3 o'clock. In 26 years the paper was distributed free 124 times, an average of less than 5 editions a year. The record endurance contest was 546 days, ending on a Friday the 13th in 1935. Letters addressed to "Sunshine City" are sent to St. Petersburg.

Having advertised its place in the sun, St. Petersburg provided its visitors with ample means of absorbing the ultra-violet and infra-red rays. More than 5,000 green benches, in recreation centers and flanking the sidewalks of the thoroughfares, have converted the city into a park. Their color, size and design are standardized by municipal ordinance. These slatted divans serve as mediums of introduction, with the weather the opening and principal topic. Operations, symptoms, and remedies run a close second. The benches are the open-air offices of the promoter, the hunting grounds of the real estate "bird dog," a haven for the lonely and a matrimonial bureau for many. They have figured in fiction, swindles and divorce courts.

St. Petersburg's sunshine and green benches combine to create the illusion that life gets off to a good start at 75, not 30. Although persons of advanced years predominate, the majority of bench warmers are not strictly sedentary. The city is a place of energetic participation in outdoor recreation, and for the most part sitting is but an interlude. In fact, those in the higher age brackets, including guests of the expensive hotels, and trailer-car transients, as well as those who own their winter homes, are banded together in the Three-Quarter Century Club, whose members top three-score and fifteen. These oldsters stage their own dances, theatricals, boxing exhibitions, and ball games, always events of lively interest. So while the city offers interesting sights to the stranger, it is in reality one of organized activity rather than eye-filling vistas; lifetime habits of industry reassert themselves here in channels of recreation.

In addition to its recreational and sports attractions, St. Petersburg's cultural outlets offer a cosmopolitan blend found only in a city of diverse population. The range of music reaches from operatic concerts by metropolitan artists to daily band concerts in the downtown park. The band with its soloists is composed almost wholly of former members of Sousa's and Pryor's organizations and the Boston Symphony Orchestra. Eighty percent of the members of the local Art Club are professionals. Several magazine illustrators and a number of leading comic-strip artists make St. Petersburg their permanent home and hold annual exhibitions.

The city has furnished locale and color for many professional writers. The late Ring Lardner's short story, The Golden Wedding, was a Sunshine City tale. Rex Beach, George Ade, and Sewell Ford have used St. Petersburg and its environs for fiction background. Since it plays host to two major-league ball clubs each spring — the New York Yankees having trained here since 1924—St. Petersburg perhaps datelines more baseball copy than any other city in the State. Although it is the acknowledged winter baseball capital of the Nation, and ranks highest among Florida cities in gate receipts, including capacity Sunday exhibitions, nevertheless several churches hold double services twice a day on Sunday to accommodate the overflow of worshippers.