Photo: Homes in the Roser Park Historic District, St. Petersburg, FL. The Historic District was listed on the National Register of Historic Places in 1998. Photographed by User:Ebyabe (own work), 2011, [cc-by-3.0 (creativecommons.org/licenses/by/3.0)], via Wikimedia Commons, accessed August, 2014. 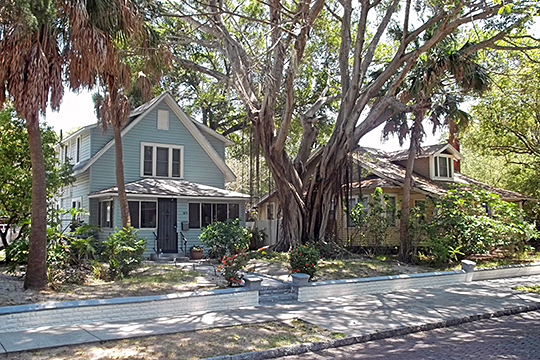 The Roser Park Historic District [‡] was listed on the National Register of Historic Places in 1998. It was designated as St. Petersburg's first local historic district in 1987.

Roser Park is a small residential neighborhood south of downtown and east of Martin Luther King Street. The neighborhood, which developed primarily during the 1910s and 1920s, is oriented around Booker Creek, a major landscape feature that is characterized by narrow green space, steep banks and hilltop setting for residences giving the neighborhood a distinctive topography. Developer Charles Martin Roser [1864-1937] walled the ravine banks along the creek in 1914 and in some places they reach a height of 5 to 6 feet to prevent the banks below the residences from subsiding. Some portions of the walls even remain where houses no longer exist. Other streetscape and landscape features of the district include mature tropical and semitropical trees and plants, two road bridges, hexagonal paver sidewalks, brick-paved streets, and rough- dressed granite curbs.

The Roser Park Historic District is significant for its association with three themes in American history. As one of the early streetcar suburbs in the city, Roser Park is important for understanding St. Petersburg's early community planning and development efforts and reflects events significant in shaping the city's physical and social landscape in a pattern that, similar to many other urban areas throughout the nation, would persist until the end of the Second World War. This pattern of extending the trolley lines into the undeveloped hinterlands of the city would spur suburban development in the first half of the century as accessibility increased and travel times reduced, offering the work force an alternative to in-town living.

The Roser Park Historic District is also significant for its collection of architectural styles. The residences display an eclectic collection of early twentieth-century designs, the most prominent being the Craftsman, Prairie, and Bungalow styles. Other styles represented include Mediterranean Revival, Colonial Revival, Neoclassical, Tudor Revival, and Frame Vernacular.

Roser Park is also the product of an earlier city planning trend — the romantic landscape suburb — that was popular during the mid-19th century. The romantic suburb movement, like that of the City Beautiful Movement, sought to impose rationality on the physical environment but with an emphasis on the healthful effects upon urban citizens of natural and pastoral areas instead of emphasizing neoclassical themes. Curving drives along Booker Creek and parks with lush landscapes provided the backdrop for this new suburb. In Roser Park, species from the Far East such as tamarind and kapok were introduced. A variety of palm trees including royal and the native sable were planted. Flowering plants such as hibiscus and bougainvillea were very popular. These plants provided the garden atmosphere that Roser desired for the Booker Creek area. Roser also improved Booker Creek, walling in the stream with decorative cast concrete blocks, adding flights of poured-in-place concrete stairs to the banks, constructing romantic wooden footbridges and arbors, and bordering the creek with meandering brick-paved drives.