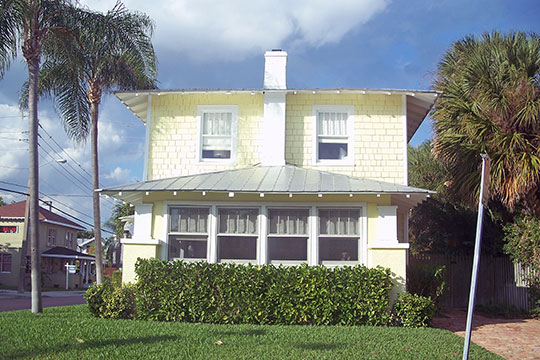 The Mango Promenade Historic District was listed on the National Register of Historic Places in 1999. Portions of the content of this web page were adapted from a copy of the original nomination document. [‡]

The Mango Promenade Historic District is an approximately 30 acre, primarily residential area with a corridor of commercial buildings on the western edge of the district. The district contains a variety of residential architectural styles including frame and masonry vernacular, Craftsman Bungalow, Colonial Revival, Mediterranean Revival, and Monterey. The commercial properties in the district are mostly masonry vernacular and Mediterranean Revival style buildings. The district consists primarily of one-story and two-story residences built between c. 1910 and c. 1947.

The Mango Promenade District developed as one of the earliest upper middle class suburbs in West Palm Beach. The neighborhood reflects the early influences of automobiles through its original garage outbuildings which architecturally compliment the main houses. [see Early Automobile Suburbs] Mango Promenade and Orange Court are notable pedestrian walkways that distinguish the neighborhood from most of the others in West Palm Beach. Each was constructed to link South Dixie Highway with South Olive Avenue and each also served as an entrance walkway for houses on either side.

Garage entrances were relegated to parallel alleys to the rear. Mango Promenade was platted in 1913 and, by 1925, the street was almost entirely built up. Orange Court was not platted until 1924 and was only sparsely populated when the Land Bust of 1926 halted construction throughout the city. Consequently, construction on Orange Court continued until the early 1950s. The district's other residential streets are laid out in traditional suburban format with driveways from the main street leading past the side of the house to either or rear garage structures or rear alley access to garages and garage-apartments. The houses in these areas are generally set back 15 feet from the street.

The Mango Promenade Historic District also contains a small commercial area along South Dixie Highway. In 1927, the Flamingo Civic Club defined the boundaries of the Flamingo Business District as "extending from Palm Avenue (now Palm Street) to Elmira Road (west from South Dixie Highway a block south of Belvedere Road), from the Florida East Coast Railroad to Olive Avenue." By 1951, the business district had expanded and the Flamingo Business District Association defined it as "Okeechobee Road to Belvedere Road." The commercial strip consisted of one-story to three-story masonry structures, primarily Mediterranean Revival or masonry vernacular in style, built to the front lot line, abutting the sidewalk. Large storefront windows faced the street to attract pedestrians and automobile traffic. The "Flamingo Business District" was in walking distance for most, but also proudly promoted automobile traffic. The mercantile buildings of the district date from the mid-1920s, and reflect the prevalent architectural styles of the period. Commercial construction came to an abrupt halt from the combined forces of the Land Bust and the 1926 and 1928 hurricanes.

The two-acre city park at South Dixie Highway and Park Street originally served as an African-American cemetery from 1902 to 1921, and as a public park from 1921 to the present. During the 1920s, while parts of the Mango Promenade Historic District were being platted, built, and occupied, the city converted the African-American cemetery to a public park known as "Dixie Playground." In the 1920s, the park was the focal point of special events in the Flamingo Business District, but it continued to serve primarily as a neighborhood park for families who were moving into the Historic District and the new subdivisions being built south and west of the park. Later the city changed the park's name to "Flamingo Park."

The district is made up primarily of single family residences on single-lot parcels. Besides residences, there are also substantial numbers of outbuildings including garages and garage apartments. Contributing apartment buildings and commercial buildings are also found in the district. Nearly all of the homes in the district are owner occupied. Over 80 percent of the contributing buildings were constructed between c. 1910 and 1926. The remainder were built between 1927 and 1947. Historically, the neighborhood was home to many of West Palm Beach's prominent residents.

The buildings in the Mango Promenade Historic District vary in form and style. They represent a variety of styles dating from the 1910-1940 time period. In general, the outbuildings reflect the style characteristics of the main structure on the property. The predominant house styles in the district are American Foursquare and frame vernacular. The district also possesses a notable number of Craftsman bungalow residences, several Colonial Revival houses, and more than a dozen masonry vernacular residential and commercial buildings. There is also a scattering of Mediterranean Revival residential and commercial buildings, three Mission residences, and two Monterey style residences.