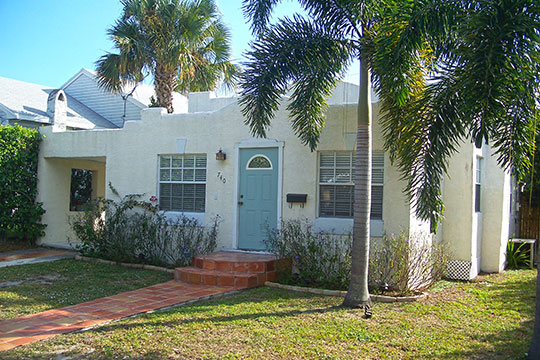 The Grandview Heights Historic District was listed on the National Register of Historic Places in 1999. Portions of the content of this web page were adapted from a copy of the original nomination document. [‡]

The Grandview Heights Historic District is an approximately 23 acre, primarily residential area that contains a variety of residential architectural styles that includes frame and masonry vernacular, Mission, Craftsman Bungalow, Mediterranean Revival, Monterey, American Foursquare, Colonial Revival, and Minimal Traditional. The district consists primarily of one-story and two-story single family dwellings constructed between 1914 and 1948. Most of the primary residences have outbuildings, such as garages, garage apartments, and separate apartment structures. There are also a few small commercial buildings in the area, and two churches. Of the 363 buildings in the district, 268 are contributing and 95 are noncontributing, a ratio of 73 percent contributing to 27 percent non-contributing. Three Mediterranean Revival style residences in the district, all of which were constructed in the 1920s and are significant for their architecture, were moved in the 1980s from the now destroyed Hillcrest residential neighborhood which was located near Grandview Heights.

The Grandview Heights Historic District developed as an early speculative middle to working class neighborhood southwest of the central downtown area. As one of the earliest areas to be developed outside of downtown, the property which now makes up Grandview Heights was chosen because of the relatively steep topography for South Florida. The neighborhood was considered a very desirable place to live since it was less than a mile from downtown and within close proximity to the City Terminals and Turning Basin, which were located where Howard Park is found today. The Turning Basin remains on the northern section of Howard Park, but the City Terminal docks were destroyed in the 1920s. Historically, the neighborhood stretched from Okeechobee Road to Park Place. According to the 1926 Sanborn Map, various businesses were located along Okeechobee Boulevard, but the most of the neighborhood consisted of houses, their rear garages, and garage apartments as well as one and two-story apartment buildings. Since the area was platted in the 1910s, the eastern boundary of the district has always been the Florida East Coast Railway tracks (laid 1895) located just beyond Alabama Avenue. Throughout the neighborhood's history, warehouses and commercial buildings were located along the railroad tracks.

The three subdivisions now known as Grandview Heights were platted in a grid pattern. The lots were either narrow, so potential buyers would have to buy more than one lot to accommodate their homes, or approximately 50 x 100 feet, to allow home owners to construct a garage at the rear of the house. The neighborhood design reflects the early influences of automobiles through the rear alleyways and original garages and garage apartments, which architecturally complement the main houses. The streets are laid out in a traditional suburban format, either with driveways leading from the main street past the side of the house to either porte-cocheres or garages or with rear alley access to the garages or garage apartments. Sidewalks are located along the street and walkways lead up to the front doors. A landscaped median along Florida Avenue was included in the design of Moss and Heisler Addition when it was platted in 1912. The other subdivisions, Palm Beach Heights and Grandview Heights, chose to extend the median along Florida Avenue through their areas as well. Historically, the median featured palms and other native plantings.

The Grandview Heights Historic District is made up primarily of single family residences on double lot parcels. In addition to the residences, there are numerous outbuildings, including garages, garage apartments, and detached rear apartment buildings. There are also a number of primary apartment buildings, including one-story duplexes and two-story structures. The district also has two churches and five small commercial buildings. Nearly all of the single family dwellings in the district are owner occupied. Over ninety percent of the contributing buildings in the district were constructed between 1914 and 1926. The remainder were built between 1927 and 1948.