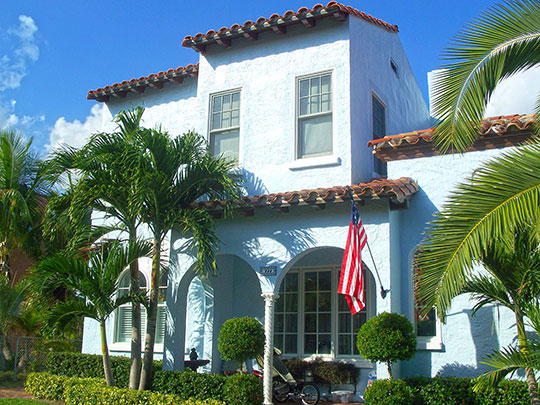 The Flamingo Park Historic Residential District was listed on the National Register of Historic Places in 1999. Portions of the content of this web page were adapted from a copy of the original nomination document. [‡]

The Flamingo Park Historic Residential District is a residential area located in West Palm Beach, Florida. The approximately 95 acre district is roughly bounded by Parker Avenue (west), Georgia Avenue, Florida Avenue, and the F.E.C. Railroad tracks (east), Avon Road and Claremore Drive (south), and Park Place (north). The district contains a large number of residential buildings exhibiting various interpretations of the Mission and Mediterranean Revival styles. There are also a substantial number of wood frame vernacular and Minimum Traditional houses, but other styles common to many historic Florida residential neighborhoods, such as Craftsman/Bungalow and Colonial Revival, are few in number. The buildings are primarily one and two-story residences built between c. 1921 and 1949 that have associated secondary structures, such as garages and garage apartments.

The neighborhood is located slightly southwest of downtown West Palm Beach. Immediately north of the district is the Grandview Heights Historic District. Near the eastern boundary of Flamingo Park is the Sunshine Park residential neighborhood and a stretch of noncontributing light industrial and commercial structures along the F.E.C. Railroad tracks, which provide a visual change in use and character from the historic residential area. A concentration of predominantly non-historic residential buildings is located to the west of the district. To the south is a strip of non-historic commercial and light industrial buildings similar in character to those located east of the district.

The original Flamingo Park Subdivision was platted in a regular grid pattern, and subsequent development reflects the configuration of the original plat. The neighborhood reflects the early influence of suburban automobile use through the number of garages and garage apartments that architecturally complement the primary residences. The streets are laid out in a traditional suburban residential format, with driveways leading past the side of the main house to porte-cocheres or garages. Sidewalks are located along the street, and paved walkways lead to the main entrances of residences.

The terrain slopes sharply from west to east, and the homes in the blocks between Parker Avenue and Georgia Avenue are set high above the street level. Low concrete retaining walls, typically no higher than 1' 6" commonly line the sidewalk along these streets. Landscaping along the streets includes rows of palms and live oaks.

The district comprises mainly single family dwellings, but there are also a large number of outbuildings, including garages and garage apartments. The majority of the single family dwellings are owner occupied. More than fifty percent of the contributing buildings in the district were constructed during the 1920s. The remainder of the historic structures were erected between c. 1930 and 1949. The buildings vary in form and style, reflecting architectural tastes that were current in the U.S. during the period of significance. The outbuildings are generally vernacular structures or reflect the architectural character of the primary buildings with which they are associated. The dominant style in the district is Mission Revival. Other notable styles represented in the neighborhood—frame vernacular, Mediterranean Revival, and Minimal Traditional—account for less than half of the primary buildings found in the historic district.

In April of 1921, West Palm Beach businessman M.E. Gruber purchased for $240,000 a 120 acre tract of land in what would become the Flamingo Park Subdivision development. Fifteen days later he resold the property to the Royal Palm Realty Company for $400,000. The Palm Beach Post announced on April 18, 1921 that the area was being platted under the name of Flamingo Park. Full-page advertisements proclaiming Flamingo Park to be "the most attractive place to live year round" and "soon to become the highest priced property in the South" began to appear in the local newspapers. On April 22nd, the first building lots were offered for sale, and within the first five hours, $54,000 worth of property had changed hands. Second day sales surpassed the first, with land purchases totaling $63,000. Initially, the new subdivision was not included within the city limits of West Palm Beach, but by August of 1921, the area had been annexed to become part of the municipality. Construction activity in Flamingo Park did not originally proceed with the frenzied activity that marked other new residential areas of West Palm Beach. During 1921, only six building permits were issued for the new subdivision, and only one primary building, the house at 701 Kanuga Drive dates from the year 1921.

Despite this poor showing, the Royal Palm Realty Company persistently advertised the continuing improvements being made to the development. By March of 1922, only thirteen lots had been sold in Flamingo Park, but the Palm Beach Post assured readers that there was not too much property being offered on the market. New developments, such as El Cid, Sunshine Park, and Flamingo Park were hailed as substantial additions to the property values of the city. Despite this optimistic view of the potential for the real estate market expressed by the Post by the latter part of 1922, the Royal Palm Realty Company deeded all of its unsold lots back to M.E. Gruber and the bank. Development in Flamingo Park remained stagnant, and no houses in the neighborhood are documented as having been constructed in 1922.

Once Flamingo Park was back in Gruber's control, the developer worked diligently to make his investment profitable. On January 25, 1923, an auction of Flamingo Park property was declared a success by the Palm Beach Post. Free transportation from the city park to the area was provided, and a large crowd of potential buyers attended the event. Lots were sold for between $25 and $30 a front foot to West Palm Beach real estate's brokers who were purchasing the property on a speculative basis. Seventy-six building permits were issued for construction in Flamingo Park during 1923, but only six houses in the historic district date from that year. Still, Gruber's diligence began to pay off. Over forty houses were constructed in 1924, and approximately three times that number were erected in 1925. The collapse of the Florida Land Boom in 1926 prompted a sharp decline in construction in Flamingo Park, so that only about thirty houses date from that year. When the Land Boom ended in 1926, the neighborhood had been largely built up, indicating that construction had taken place at a dramatic rate in a period of just over two years. Despite the harmful effects that the Great Depression had on the economy of Florida as a whole, residential construction continued slowly in Flamingo Park throughout the 1930s. No houses were constructed between 1930 and 1933, and only about 20 houses were built between 1934 and 1936. In 1937, however, the neighborhood saw the construction of 25 houses, after which the rate of construction fell off again until 1940 when 15 houses were built. Eight houses were erected in 1941, but no houses were constructed during the World War II years of 1942-1945. The post-war years saw a renewal of house building activity, with 1946 seeing the largest number (21) of houses built during the remaining years of the decade.