Photo: Rosedale (Uriah Forrest House), ca. 1793, 3501 Newark Street, NW in the Cleveland Park neighborhood of Washington, D.C.; the oldest home in Cleveland Park. A small stone cottage constructed in 1740 was incorporated into the house. Rosedale was owned by Forrest descendents until 1920. Photograph by User:AgnosticPreachersKid, 2008, (own work) [cc-by-3.0 (creativecommons.org/licenses/by/3.0)], via Wikimedia Commons, accessed October, 2012. 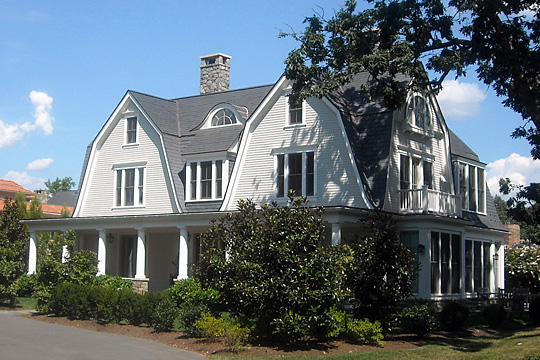 The Cleveland Park Historic District was listed on the National Register of Historic Places in 1987. Portions of the content on this web page were adapted from a copy of the original nomination document. [‡]

The Cleveland Park Historic District, located in the northwest sector of the District of Columbia, is an intact community integrating residences, apartment buildings and neighborhood retail shopping located on a hill overlooking the city center and separated from it by Rock Creek Park, a deep geological chasm. The District includes approximately 280 acres and approximately 1100 resources.

Cleveland Park, the streetcar suburb, is unique in Washington D.C. because of the concentration of-architect-designed late Victorian frame houses reminiscent of New England summer homes along the coast. It was the first electric streetcar suburb in Washington D.C. which was sufficiently successful that houses were constructed continuously from 1894 to 1901 representing diverse architects and a variety of contemporary popular styles. It is also unusual in that the suburban development beginning in 1894 was superimposed upon the land previously occupied by country estates (intact examples of which remain) rather than prior suburban dwellings as was the case with Mount Pleasant. Also unusual is that Cleveland Park maintained its rural ambiance throughout the period of its development to the 1940's. Unlike Mt. Pleasant, urban housing types were not introduced in great numbers thereby changing the suburban atmosphere. All of the streets between the avenues in Cleveland Park retain the suburban flavor of the initial development with a preponderance of single family dwellings, of varying sizes, set in generous natural surroundings.

Cleveland Park's commercial area along Connecticut Avenue is also unique in Washington D.C. It embodies an intact example of enlightened planning for a neighborhood shopping area which was the goal of the 1920 Zoning Law, one of the earliest adopted in the U.S. This area represents a concentration of commercial structures dating from 1925 to 1939 reflecting changing attitudes in community planning and development largely in response to the increased use of the automobile and changing trends in architectural styles. It contains within it the earliest known prototype shopping center in Washington D.C., possibly the earliest on the East Coast. Together with the residences the commercial area exemplifies the continuous line of development of a successful residential community from 1894 to 1941. The initial success of the Cleveland Park neighborhood prompted the establishment of apartment buildings and small shops along Connecticut and Wisconsin avenues which consequently led to the construction of additional houses and apartment buildings. The history of the two areas—the residential side streets and the main traffic arteries from the city—are inextricably linked.

Cleveland Park is distinguished from the later automobile-related suburbs situated to the north which are more sprawling and less oriented toward a commercial center along the avenues. They generally lack the cohesiveness as identifiable communities which is one of the distinguishing features of Cleveland Park. It is also distinguished from Woodley Park, situated to the south, which has more townhouses, fewer large front yards, fewer hills, and a predominance of brick architecture all of which give it a more urban atmosphere. The core of late Victorian houses in Cleveland Park predates the architecture in communities to the north, south and west and is separated from communities to the east by the geography of Rock Creek Park which originally made this area inaccessible.

A distinguishing feature of the Cleveland Park Historic District is the large number of frame houses with local Rock Creek granite foundations, in a city of predominantly brick structures, representing a full range of architectural styles popular around the turn of the century including: Carpenter Gothic, Italianate, Queen Anne, Shingle, Dutch Colonial Revival, Mission Revival, Colonial Revival, Neoclassical, Japanese influence, Craftsman Bungalows, Developer's Georgian and Mission, Tudor revival, English Cottage, Foursquare, Sears and Roebuck houses in various styles, Beaux Arts, Art Deco, International Style, and modern or contemporary. Subsequently brick and some stone houses were built in the teens and twenties. Stylistically, the neighborhood is a veritable museum of changing tastes representing the overlay of history in a continuous line of development from 1894 to 1941.

Nationally prominent architects as well as local Washington architects, builders and developers were responsible for the design and construction of houses, shops, apartment buildings, the school, firehouse and church. All of the buildings have been generally well preserved with few major alterations. The houses are predominantly two stories with attics. The apartment buildings vary from three to five stories. Two exceptions are the Broadmoor, considerably set back from the avenue, and Tilden Gardens, surrounded by extensive open space and landscaping. The shops are all one and two-story buildings. A coherence of scale and proportions is maintained throughout the district. Newer taller buildings along the east side of Wisconsin were not included within the boundaries of the historic district.

Most of the single family dwellings in the streetcar suburb were built between 1894 and 1930. The original core of the neighborhood (Newark, Highland Place and Macomb St. east of Ross Place) was constructed in two phases (1894 to 1901 and 1903 to 1912) and was largely complete by 1912.

During the first phase (1894 to 1901), which set the tone for the appearance of the neighborhood, the houses were individually designed by local architects and builders who employed a great variety of styles representing the eclecticism of the day. Robert Thompson Head, the most prolific architect for the Cleveland Park Company, was influenced by Queen Anne, Colonial Revival, Japanese, and Prairie styles in his four years of work for John Sherman. Waddy Wood introduced the first Shingle and Mission revival homes into the neighborhood.

During the second phase of construction there was an increasing simplification in the house design, which was common after the turn of the century. "The trend toward smaller, less ornamented, more standardized houses also helped balance the mounting expenditures for domestic technology." In the houses of the 1900s the number of projecting wings, dormers, and porches declined drastically, leaving a simple rectangular box shape, often close to a perfect cube." (Gwendolyn Wright; Moralism and the Model Home; Chicago, 1980; pp.238 & 244) The houses continued to be primarily constructed of wood but some of them were covered with pebble dash, and the first brick houses were built in 1904 and 1905. The Foursquare house with evident Prairie style influence was popular. The front porch continued to be a standard feature. New developers and architects became active in the neighborhood during this period, and the Cleveland Park Company ceased to hire architects and depended on John Sherman and his artist wife, Ella Bennett Sherman, to produce the designs, some of which were repeated more than once in the neighborhood.

After the departure of the Shermans in 1910, other developers moved in and filled in the gaps in Cleveland Park and then spread to the south and west into Cleveland Heights and Oak View (west of 33rd Place on Macomb, Lowell and Woodley to Wisconsin Ave.) These two subdivisions were largely completed by 1922. W.C. & A.N. Miller were very active in this area designing substantial brick and frame homes in a variety of the revival styles, alternating between classical and medieval in inspiration, popular in house design during the second and third decades of this century. They built a variety of Colonial Revival style houses, Tudor Revival houses as well as two romantic English cottages with roofs made to simulate thatch. Charles Taylor was the other developer who was most active at this time. His houses are usually variations on the Foursquare house with diverse front porches, gables and dormers, and they are generally less original and distinctive in appearance than the Miller houses.

In 1919 H.A. Kite undertook the most massive development Cleveland Park had yet witnessed when he took out building permits for 14 houses from 3101 to 3223 Macomb on the north side of the street between Ross Place and 33rd Place.

The first apartment house in Cleveland Park was constructed by Harry Wardman in 1919, shortly following the fire station which was the first building to open on Connecticut Avenue in 1916. Wardman was a successful builder by this time having recently completed the Wardman Park residential hotel in 1917-18. In his apartment building and contiguous rowhouses of 1921, he established the low rise appearance which was to become predominant along Connecticut Avenue.

Apartment buildings of four and five stories with Colonial Georgian decorative motifs followed in rapid succession during the 1920's. These buildings were all brick (red and yellow) with stone trim accentuating the entrances and corners with some of the following details: arched entrances, pediments, angle quoins, key stones, pilasters, modillioned cornices and urns as well as decorative rectangular and round stone panels with rosettes and swags.

The Cleveland Park Historic District includes significant architectural examples of commercial architecture from the 1920's and 1930's. Located within the Cleveland Park Historic District is the first shopping center in Washington D.C. and possibly the earliest on the East Coast of this particular configuration since it was repeatedly cited in contemporary journals as a new solution to urban traffic, parking and shopping problems. The Park and Shop (Connecticut and Ordway) introduced the novel idea of a single commercial complex with coordinated merchandising and easily accessible off-street parking in front making one-stop shopping a convenient reality. The Cleveland Park Historic District includes in its commercial precinct an unusually intact example of the 1920's linear shopping (commercial) strip which generated increasing traffic congestion caused by on-street parking and located adjacent to it is the 1930 prototype shopping center which provided a solution to that problem. In addition directly across Connecticut Avenue in the 3400 block are two mixed use commercial projects of the 1930's capitalizing on the ideas introduced in the Park and Shop prototype shopping center. In a microcosm the Cleveland Park Shopping area represents the problems created during the 1920's with the increasing personal use of the automobile and the solution provided to ease that problem and subsequent variations on the solution. The Cleveland Park commercial precinct possesses the integrity of its original location, design, materials, workmanship, setting, feeling and association visually representing in the 1980's enlightened thinking and planning for the development of neighborhood shopping in the 1920's and 1930's.

The Cleveland Park Historic District also includes important architectural examples of the development of apartment house design- in the District of Columbia. It has examples of small scale apartment buildings (some of which are combined with first floor shops) of the 1920's along Connecticut Avenue adjacent to and punctuating the corners in the commercial precinct. Located on one of the residential street are the first garden apartments in the District of Columbia. Along Connecticut Avenue north of the shops are outstanding examples of late 1920's suburban style apartment houses in the Jacobean style and Art Deco apartment buildings of the 1930's.