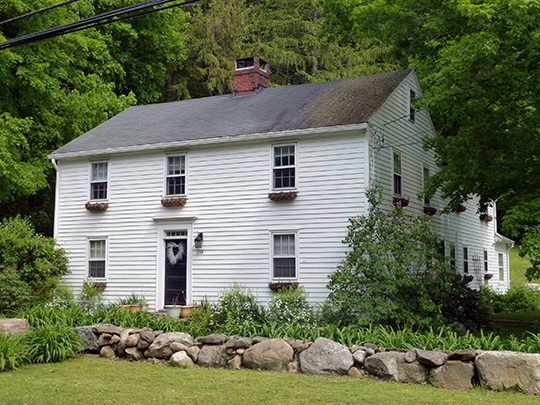 Canton Center Historic District was listed on the National Register of Historic Places in 1997. Portions of the content on this web page were adapted from a copy of the original nomination document. [1]

Canton Center Historic District consists of approximately 500 acres in the geographic center of the Town of Canton, Connecticut, running north-south along 1 1/2 miles of Cherry Brook Road/State Route 179, which runs parallel with Cherry Brook, and adjacent streets.

Buildings constructed during the town's period of growth and prosperity, the 19th century, constitute the major architectural resources of the Canton Center Historic District. In particular, 10 buildings are good examples, well-preserved, of the Greek Revival style. Buildings required for typical town-center activities — church, store, school, and blacksmith shop — and cemetery all are in place from the 19th century.

Similarly, farm outbuildings are present in large numbers. Barns with weathered wood siding, sheds, dairy barns, and an occasional silo are seldom out of sight. Their contribution is as important to the Canton Center Historic District's makeup as the open spaces.

Canton Center buildings dating from the mid-18th-century years of early settlement no longer are standing. Several buildings survive from the late 18th century but most of them have been altered, or in one case (4 West Mountain Road) enveloped in later construction, making it difficult to visualize original configuration. An exception is 124 West Road, a well-preserved two-story central-entrance house dating from 1787 which features 12-over-12 windows, five bays, and central chimney.

Early 19th-century houses continued the Colonial mode but soon showed the influence of the oncoming Greek Revival style, perhaps in alterations. For example, 225 Cherry Brook Road, 1814, exhibits the standard 18th-century design of five bays with central entrance, central chimney, and door near the front on the side elevation. At the same time, the gable end is treated as a pediment with central rectangular window in the manner associated with the Greek Revival style. The house at 59 Barbourtown Road, 1825, is similar, with 12-over-8 sash and a two-tiered rectangular window in the pediment.

The Greek Revival took over in force at about this time, giving the Canton Center Historic District eight houses and two schools which are good examples of the style. In the simpler interpretations the three-bay gable end of the house, such as 167 Cherry Brook Road, faces the road based on the orientation of a Greek temple. As early as 1830, however, more sophisticated designs were built, as seen in the stone house at 22 Barbourtown Road, where the entrance on the long side is protected by a Doric portico. Twin Doric columns without bases support a broad entablature of architrave, frieze, and cornice. The added wide front porch on the gable end facing the road has the turned posts of a later era.

Later frame houses provide examples of other variations in the style. At 193 Cherry Brook Road pilasters flank the front door and define the corners of the main block, and a wide frieze encircles the house. The recessed tetrastyle porch of the wing and the distinctive glazing pattern of the two tympanum windows are unique in the district. Fluted Ionic columns in antis are a feature of 4 West Mountain Road, where the main block has a low pyramidal roof and a full entablature of architrave and frieze divided by a dentil course running the entire length of the 58-foot ell. Wall dormers in the wing of 121 West Road are its distinguishing attribute, although judging from the manner in which the wing's roof is framed into the main block, the entire wing may be a later addition.

The Congregational Church, 1814, is a typical Federal design, except for its tower which displays no recognition of the style's usual Wren-Gibbs precedent of tapered steeple rising from the ridge of the roof. The church underwent an atypical experience in 1873 when extensive Gothic Revival alterations were carried out. The two tiers of rectangular windows on the sides were replaced with a single tier of pointed-arch openings, while the interior was entirely redone with dropped wooden-truss ceiling complete with acorn-shaped pendants, removal of galleries and high pulpit, and closing off of the choir loft. The changes were reversed in 1967.

Mid-century utility buildings, the general store and blacksmith shop, were constructed in vernacular fashion as part of the community center's cluster that includes church, school, and cemetery, while the high-style revivals of later in the century are little represented in the district. There is one Italianate house with characteristic chamfered posts, brackets, roof overhang, and monitor at 144 Cherry Road and two Queen Anne houses, a modest example at 210 Cherry Road, 1876, and a flamboyant interpretation using varied sheathing materials, asymmetrical roof line, and octagonal tower at 270 Cherry Brook Road, 1888.

There was relatively little new construction in the Canton Center Historic District in the 20th century to 1947. A major exception is the Cherry Brook Primary School, 1941, a one-story building of red brick with white trim in the Colonial Revival style.

Canton Center Historic District exhibits good examples of well-preserved buildings constructed in the Colonial, Federal, Greek Revival, Italianate, and Queen Anne architectural styles which were erected to support the agricultural district's farming activities during the 18th and 19th centuries. The many open spaces, which to a significant degree are still used for farming, define the historic agrarian environment characteristic of the rural setting. Nine of the properties in the Canton Center Historic District are larger than 20 acres, the largest 163. The Canton Center Historic District also fulfilled multiple additional functions as the seat of town government and the center for social, religious, and mercantile activities essential to a 19th-century agrarian society. The total resource of farmland, associated buildings, and town-center cluster constitutes a good example of a well-preserved rural agricultural district in its entirety, unusual in Connecticut's Central Valley Historic Context Region.

The formal history of Canton Center Historic District began in May 1750 when the Connecticut General Assembly established the First Ecclesiastical Society of West Simsbury, as it was initially named. After the Town of Canton was incorporated in 1806, the center for town government was in the district for over a century, until the village of Collinsville on the town's southern border became the seat of government in 1920.

Early settlers came to farm the land, raising rye, Indian corn, cattle, sheep, swine, and apples. Existing Colonial-style houses were built starting toward the end of the 18th century when the farming community had become well established and prosperous. Cherry Brook also offered waterpower potential which was soon developed. There were several dam sites, three of which survive but not in anything like original condition. Over the years, waterpowered enterprises included eight distilleries to process alcoholic cider, three tanneries, three grain mills, four sawmills, two fulling mills, one powder mill, and one tin factory. In general, the mills serviced and supported the agrarian economy. There is only one easily recognizable mill site in the Canton Center Historic District today, and its present dam was built early in the 20th century.

Toward the end of the 19th century, the dairy industry grew in importance in line with the general 19th-century trend in Connecticut away from subsistence farming to market-oriented activity. Canton farmers organized a Creamery Association which in 1879 began converting milk from local farms into butter for shipment to market, making it "the oldest farmers' cooperative in...the state" ("Preliminary Report of the Canton Center Historic District Study Committee," p. 12). The cooperative built a new building in 1893 at a cost of $1,730, which is still standing. An ice-cutting operation reached output of 2,000 tons per year, ca.1930. One large dairy farm continues in operation.

The rate of change in the 20th century has been slow. Farmhouses still stand and the cluster of buildings in the district center appears about as it did in the 19th century. Open spaces abound. A noteworthy indication of stability in the community is the fact that the house built in 1876 as the First Congregational Church Parsonage continues in that function. Agricultural activities have declined, with the notable exception of the dairy farm at 22 Barbourtown Road, which still is active as may be seen by its two working barns, silo, two milk sheds, equipment shed, and three miscellaneous outbuildings. While many of the fields are left fallow or planted to hay, nevertheless they continue to provide the rural ambience characteristic of the Canton Center Historic District for 200 years.

The Colonial-style houses of five bays, central chimney, and central entrance authoritatively establish a record of good practice in 18th-century design and construction for Canton Center. Good examples of the style and well-maintained, they contribute significantly to the architectural history of the district.

While the church was built in 1814 in the Federal style, which was in vogue throughout the Northeast at the time, there are no houses in the Canton Center Historic District in the Federal style. Explanation for the absence of the mode in domestic building is not known. The church well represents the style. Its semi-circular fanlights, slender pilasters, Palladian windows, and overall attenuated proportions demonstrate that the builder was conversant with fashionable practice, probably through pattern books.

The Greek Revival style was interpreted in the Canton Center Historic District with great expertise in 12 domestic buildings. The commodious stone house at 22 Barbourtown Road is an early example (1830) of solid massing with strong well-designed features, such as the wooden portico with paired Doric columns, testimony to the wealth and sophistication of its builder and owner. The granite schist, laid up with white mortar, was quarried on the premises. Three original barns no longer are standing. Equally good design is demonstrated in the massing and detailing of the frame house at 4 West Mountain Road, where the columns are in antis and the denticulated architrave and frieze not only extend around the roof lines of the main block and wing but also run the full length of the 58-foot ell. The screen of four fluted Doric columns supporting the recessed porch of 193 Cherry Brook Road is equally distinguished. The two small Greek Revival schools are archetypical of their type, embellished with corner pilasters and with fluted Doric columns in antis at the recessed entranceway. The fact that there are two is unusual.

With a decline after the mid-19th century in the economic importance of agriculture and waterpower came a corresponding decline of building activity in the Canton Center Historic District. Consequently, 19th-century revival styles are not well-represented. The one Italianate house, 144 Cherry Brook Road, and the two Queen Anne Houses, 210 Cherry Brook Road and 270 Cherry Brook Road are good examples, but few in number.

The historic Colonial and Greek Revival houses, built as components of farmsteads, give a strong sense of the late-18th and 19th century agrarian domestic architecture. The Federal church and vernacular store and blacksmith shops remind that religious, social, and mercantile needs of the community also were supported by buildings still standing which functioned as part of the activity associated with the seat of town government.