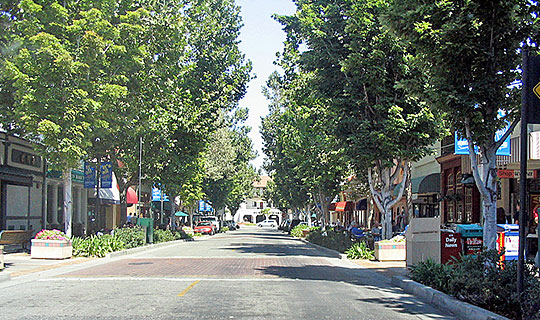 Sunnyvale, a quiet rancher's trade center, once the seat of the tract purchased by Martin Murphy, Jr. from Rancho Pastoria de las Borregas (shepherds of the lambs). Among fig trees grown from mission cuttings stands the two-story white Martin Murphy, Jr. House, framed in Boston and shipped round the Horn when the Murphy family settled here in 1849. A room with an altar was set aside for mass, marriages, and christenings, celebrated by priests from Mission Santa Clara.

Sunnyvale is a relatively young city, incorporated in 1912. Its mild climate and fertile soil, however, have provided a comfortable and productive place for human settlement for many millennia. A peaceful Ohlone Indian village (Posolmi) thrived in the area which is now Moffett Federal Airfield for thousands of years before arrival of European settlers. Spanish explorers built Mission Santa Clara nearby in 1777, and established El Camino Real to link together the 21 California missions. With the Mexican Revolution of 1821, a portion of the land that is now Sunnyvale was given to Estrada and Inez Castro as part of a Mexican land grant. They formed Rancho Pastoria de las Borregas (Pasture of the Sheep Ranch). Missouri settler Martin Murphy Jr. purchased much of the Rancho in 1850 and established a wheat farm, which was soon replaced by fruit orchards.

Early settlers were drawn by a mild climate, abundant sunshine and the fertile soil. Calabazas Creek and Stevens Creek ran through the area. There was also great scenic beauty in the San Francisco Bay to the north and the Diablo and Santa Cruz Mountain ranges which rimmed the valley. These natural attributes are still an important part of Sunnyvale's living environment and identity.

The development of Sunnyvale began in earnest in 1864, when the Central Railroad built a line from San Francisco to San Jose. Murphy donated right-of-way for the railroad through his property in exchange for a railroad stop at Murphy Station. The original vision for Sunnyvale laid the foundation for its future growth. Early Sunnyvale residents wanted their community to be a complete city where people could live, work and play. This is a much different place than a resort or bedroom community. The concept of a complete city is still at the foundation of what Sunnyvale is and strives to be. Industry first came to Sunnyvale after the 1906 earthquake. The first industries included the Hendy Ironworks and the Libby cannery, located at the center of town, close to the railroad. Housing was also located downtown and was laid out in a traditional grid pattern, most efficient for the flat terrain of Sunnyvale. Simple, small bungalows and revival style homes were predominant. The downtown grew as a mix of uses in close proximity and walking distance of each other. When Sunnyvale was incorporated in 1912, it had just 1,800 residents.

By the end of World War II, Sunnyvale had made the change from an agricultural community to an industrial center, with its economy focused on the booming defense and aerospace industries. Naval Air Station Sunnyvale was built (now Moffett Federal Airfield) and Lockheed Martin became the City's largest employer. By 1950, farms and fields were increasingly replaced with homes, factories and offices as the population grew to 10,000.