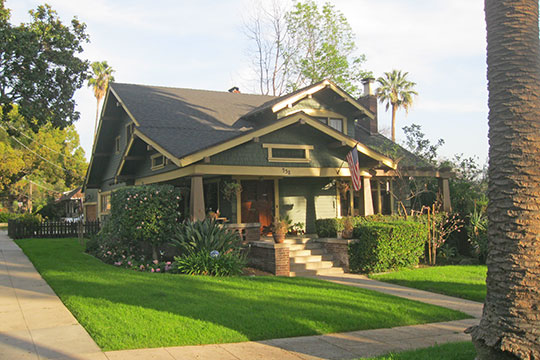 The Orange Heights/Barnhart Tracts Historic District was listed on the National Register of Historic Places in 1995. Portions of the content of this web page were adapted from a copy of the original nomination document. [‡]

The Orange Heights/Barnhart Tracts Historic District includes 84 buildings in a residential area of Northwest Pasadena—roughly bounded by North Los Robles and North El Molino Avenues and Jackson and East Mountain Streets—developed as part of the Orange Heights and Barnhart tract subdivisions. Of the district's 84 buildings, 61 buildings are contributing resources, primarily Craftsman Bungalows constructed in the first ten years following the 1906 subdivision of the Orange Heights tract. All of the contributing buildings in the district were constructed as single-family residences, with the exception of one duplex and a four-unit bungalow court. The district is complemented by a distinctive streetscape with northern vistas of the San Gabriel Mountains, elevated lots, generous, uniform, and landscaped building setbacks, arroyo stone and concrete retaining walls, and closely-spaced rows of mature street trees. Very few of the buildings have been significantly altered and the streetscape remains intact; the district is largely unchanged from its appearance during its period of significance, 1906-1930.

The predominant building form of the district is the bungalow—at its simplest a small and low, wood-frame, vernacular building with a rectangular or square open plan and gable roof—and is indicative of the middle-class single-family housing produced in Pasadena during the American Arts and Crafts movement. The buildings of the district are characterized by Arts and Crafts influences in: the use of rustic materials and finishes and simple vernacular-inspired detailing and ornamentation; the incorporation of "outdoor rooms," such as porches, terraces, balconies, and gardens, as well as the use of large and/or banked windows to capture views of the outside; and the expression of a definitive horizontality in the relationship of the building to the site, emphasized by low foundations, wide roofs with overhanging eaves, differentiation in building materials between stories (and gable ends), proportions of door and window openings and banking of windows, and the use of porches, terraces, pergolas, and porte-cocheres.

Fifty of the 61 contributing buildings were constructed in the ten-years following the 1906 subdivision of the Orange Heights Tract. These buildings include high- and low-style examples and typify the mature period of the American Arts and Crafts movement, in which the total architectural integration of Arts and Crafts ideals and high standards of craftsmanship are evident in building form and characteristics, stylistic treatments, and detailing. Other contributing buildings, particularly those constructed after World War I, still illustrate Arts and Crafts influences, though largely reduced to a modest treatment of a simplified stylistic motif with a few characteristic Arts and Crafts elements.

Commonly one-and-a-half stories with a regular plan and a wide, side-facing, gable roof with a full-front recessed porch and central front-gabled dormer; other examples also include one- and two-story buildings with a regular plan and typically either a low-pitched, side-facing gable roof with a small front-gabled porch, or a low-pitched, front-facing, gable roof with a separate, offset, front-gabled porch. The district includes mature and evolving examples, both architect- and builder-designed, of these Craftsman bungalow forms and such variations as the two-story chalet and the "airplane" bungalow. In addition to the 53 Craftsman bungalows, the district also includes eight other contributing buildings, all with Arts and Crafts influences: three examples of turn-of-the-century transitional buildings incorporating Craftsman elements; three examples of the one-story Colonial Revival bungalow, also with Craftsman elements; one example of the massed-plan variation of the Prairie style; and one example of a Mission Revival-inspired building.

The Orange Heights/Barnhart Tracts Historic District was part of North Pasadena, an unincorporated area of mostly citrus groves and fields ripe for speculative real estate development when it was annexed by the City of Pasadena in 1904. Earlier in 1885, George W. Barnhart had subdivided the property—the Barnhart Tract—on the north side of Jackson Street between Los Robles and El Molino Avenues, but only one house was constructed. In 1906, George F. Thompson subdivided a much larger adjacent tract—the Orange Heights Tract—bounded on the north by Jackson Street, on the south by Mountain Street, on the west by Los Robles Avenue, and on the east by El Molino Avenue.

Thompson's infrastructure and streetscape improvements to prepare the lots for sale ensured the success of the Orange Heights and neighboring Barnhart subdivisions during a period of tremendous growth and expansion in Pasadena. In the first ten years of the new century, the population of the City tripled as people moved to Southern California to enjoy the healthful climate and beautiful natural setting, or to test the much-touted promise as the "land of opportunity." Thompson sold 21 of his 106 lots in the first year, 1906, and within three years nearly all of the Orange Heights and Barnhart Tracts had been sold.

The Orange Heights/Barnhart Tracts Historic District is one of the best and largest collections in Pasadena of single-family residential buildings produced during the Arts and Crafts movement. The district primarily includes mature examples of Arts and Crafts architecture—50 of the 61 contributing buildings were constructed during the mature period of the Arts and Crafts movement, 1895-1918—in which the integration of Arts and Crafts ideals is apparent in the building form and characteristics, stylistic treatments, and exceptional craftsmanship; the district also includes a few transitional and late examples, constructed in the years following the mature period of the movement. Fifty-three of the 61 contributing buildings are examples of the Craftsman-style bungalow—most associated with the American Arts and Crafts movement and California (often simply called the "California style")—and particularly associated with the Greenes and Pasadena. A few Arts and Crafts examples of the Colonial Revival, Prairie, and Mission Revival styles are also included in the district. And the district is complemented by a distinctive period streetscape with northern vistas of the San Gabriel Mountains, elevated lots, generous, uniform, and landscaped building setbacks, arroyo stone and concrete retaining walls, and closely-spaced rows of mature street trees.

As typical of the larger Arts and Crafts movement as a whole, the predominant building form of the district is the bungalow, characterized by a square or rectangular plan, horizontal lines, wide roofs, and plain trim work; the Arts and Crafts Utopian and agrarian ideal of simple, informal building forms in pastoral settings is evident in a "unity in artistic expression derived from nature, straightforward construction and hand craftsmanship, minimal finish and restraint in ornamentation, [and] use of vernacular sources and references to indigenous cultural heritage." Typical of the Arts and Crafts influences in the district are: the use of rustic materials and finishes, evoking the environment of the Arroyo (particularly in the extensive use of wood); simple vernacular-inspired detailing and ornamentation, illustrating the importance of hand-skilled craftsmanship and vernacular—particularly Southern California vernacular—design sources; the incorporation of banks of windows and "outdoor rooms" to take advantage of the exceptional Southern California climate and to extend living spaces into the natural environment; and the expression of an agrarian relationship of the building to the landscape, evident in the definitive horizontally of the buildings which, "attempt[s] to associate well known picturesque human contrivances with the picturesque natural landscapes."

The high-style and highly-accomplished work of Charles Sumner and Henry Mather Greene was the unsurpassed representation of American Arts and Crafts philosophy and aesthetics in architecture. But, as the district shows, much of the work produced by other architects and builders in Pasadena during the mature period of the movement equally represents the integration of Arts and Crafts ideals and the high-quality craftsmanship typical of the period. The exceptional-quality craftsmanship of the district is most evident in the use and careful detailing of: arroyo stone and wood in foundations and chimneys; porch supports and piers; entryways; doors, windows, and trim work; sleeping porches, pergolas, and porte-cocheres; wall and siding treatments; heavy timber framing; eave/rafter treatments; and gable vents. The district includes some of the best examples in Pasadena of the work of local Craftsman builder David M. Renton, who constructed seventeen of the contributing buildings in the district, and is noted for his highly accomplished and exceptionally well crafted interpretations of the bungalow form and the Arts and Crafts philosophy and aesthetics.

The historic character of the district is greatly enhanced by an intact streetscape of mature street trees; wide grass parkways; concrete curbs, gutters, and sidewalks; distinctive stone and concrete retaining walls; and continuous, uniform landscaped building setbacks and side yards. These streetscape elements, dating from the original 1906 Orange Heights subdivision, are important visual features of the district, complement the contributing buildings and "sense of place" of the district, and complete an overall Arts and Crafts composition largely unchanged from its original appearance.

Like the buildings of the district, the streetscape also illustrates the influence of Arts and Crafts ideals. Not only does the natural slope create dramatic views of the San Gabriel Mountains and the valley; it also necessitates the use of high retaining walls, constructed of arroyo stone and scored concrete. The distinctive arroyo stonework is particularly well crafted and is, of course, closely associated with the Craftsman bungalow and the Arts and Crafts movement. Also, the retaining walls and steps, landscaped setbacks, and curved walkways frame views, further illustrate high-quality craftsmanship, and depict a picturesque aesthetic promulgated by the Arts and Crafts movement.