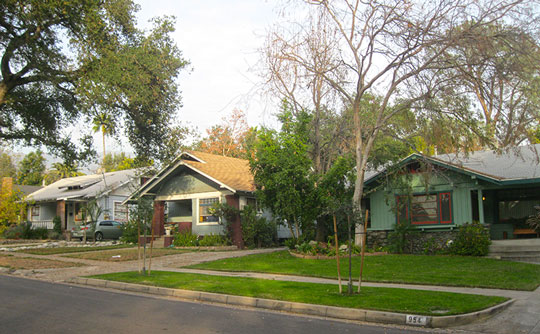 The Bungalow Heaven Historic District [‡] was listed on the National Register of Historic Places in 2008.

Pasadena's beginning dates to 1873, when a group of settlers from Indiana formed the San Gabriel Orange Grove Association and purchased land in the area of the old Rancho San Pasqual. As surveyed in 1874, the Association lands were bounded by the Arroyo Seco to the west, Wilson Avenue to the east, Villa Street to the north, and Mission Street to the south. Orange Grove and Fair Oaks Avenues were the major north-south streets. The earliest settlers came to the new colony to enjoy the climate and develop the land, both for agricultural and speculative purposes. By 1875, the colony had been named Pasadena, more than forty houses had been built, and a commercial center was developing along Fair Oaks and Colorado Avenues.

Like most of Pasadena, the Bungalow Heaven Historic District had been part of the old Rancho San Pasqual. On May 10, 1869, James Craig purchased five thousand acres in the northeast portion of the old ranch from J.S. Griffin and B.D. Wilson. This land, called the Craig Tract, was surveyed for subdivision in 1876. On November 13, 1878, Wilson repurchased eight hundred acres to create a subdivision called the Lake Vineyard Land and Water Association. In 1870, Craig issued promissory notes to William and Alexander Grogan to raise money to purchase water rights for the land. With the death of William Grogan in 1881, Alexander Grogan foreclosed on the mortgages and took over the lands as payment. Thereafter, the land was known as the Grogan Tract, although Alexander Grogan, born in Ireland, never lived there. After Grogan died in 1886, portions of his estate were sold to J.D. Yocum (May 1886), N.R. Hooper and Brothers (June 1887), Calvin Thornton (August 1887), and J.R. Veach (February 1892).

When the City of Pasadena was incorporated in 1886, only the south end (the 700 block) of South Mentor Avenue was located in the original city boundaries. In 1904, the North Pasadena Annexation incorporated the rest of Mentor Avenue, and in 1906 the remainder of the district was annexed with East Pasadena.

Early settlers in Bungalow Heaven included V.R. and Sarah Cooley, who owned a tract of land that included the present day McDonald Park, and Jennie Keil, who owned five acres of land in the southwest corner of the district. Constructed in 1888, the Keil house still stands at 714 North Mentor Avenue. It is the oldest house in the district and one of only a few surviving Queen Anne houses in the city. The small scale of this, and other late-nineteenth century houses in the southwest part of the district, established a pattern of development after annexation into the city. As early landowners sold large tracts of land to developers, one to one and one-half story Craftsman Bungalows on 50-foot wide lots quickly created a new neighborhood of middle-income residents.

Unlike the more wealthy neighborhoods developing in the city in the first decades of the twentieth century where houses were architect-designed, the houses in Bungalow Heaven were largely designed and constructed by local builders or were designs from pattern books. James Gaut, Mercer and Bliss, Edward Zube, J.H. Woodworth, George P. Telling, and the Coast Construction Company are known builders of houses in the district

The Arts and Crafts bungalow predominated through the teens until 1920 when, more Colonial Revival characteristics appeared on new houses. By the mid-20s, the district was nearly completely developed just before the Great Depression impacted construction of single-family houses for the lower and middle classes.

The significance of the district is supported by the presence of architecturally intact examples of residential buildings that have a common relationship of site plan, scale and materials and that were constructed in the period of significance, 1888 to 1929. Although the predominate building period is defined as the Arts and Crafts Movement and building style is the Craftsman bungalow, single-family house designs of the late nineteenth century with influences of Queen Anne and the common massed plan vernacular, and post Arts and Crafts period influences of American Colonial Revival have a strong and important relationship to the district as a whole. In addition, English and Spanish revival influenced bungalows of the late 1920s contribute to the overall character of the district. Because the neighborhood was developed with modest single-family houses, one story and one and one-half story Craftsman houses, rather than the two-story Arts and Crafts period house, are the most common in this district.