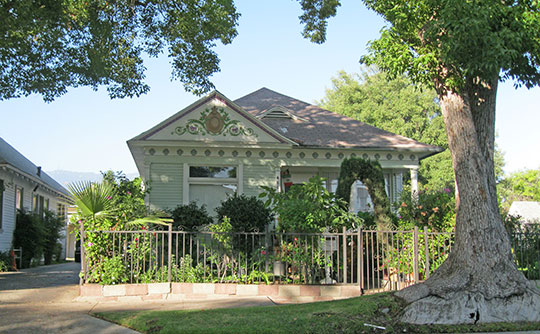 The New Fair Oaks Historic District† was listed on the National Register of Historic Places in 2011. Portions of the content of this web page were adapted from a copy of the original nomination document.

The New Fair Oaks Historic District is one of three neighborhoods in Pasadena with a high concentration of adjoining, intact residential buildings from the late 19th/early 20th century. On Lincoln Avenue, the streets are lined with mature oak trees; young trees have been planted on West Villa Street. Two properties have mature Canary Island date palms in their front yards. Although there is uniformity in the features of the public right-of-way in the district, they appear to date from a later period.

Many of the contributing houses have had minor alterations. Despite these alterations and newer additions at the rear of the properties, the feeling of the district that is clearly conveyed from the public right-of-way is one of a late 19th/early 20th century neighborhood. The surrounding area outside the district boundaries has a similar residential character, but the houses have either been altered or were built in different time periods unrelated to the specific context of this District.

Pasadena's lands were originally part of the lands of the San Gabriel Mission, which was established in 1771 and converted to private ownership when the Spanish missions were secularized in 1833. The Mission's lands became Rancho San Pasqual, which was subdivided into large tracts and several were sold or otherwise transferred to conglomerates of East-Coast investors, then apportioned to individuals within those conglomerates, then subdivided into smaller lots for development.

The New Fair Oaks Historic District is representative of early development patterns in Pasadena. The land was originally part of Rancho San Pasqual, 2,500 acres of which became the property of the Lake Vineyard Land and Water Company (LVLWC), which was founded in 1875 by one of the original owners of Rancho San Pasqual, Benjamin "Don Benito" Wilson on the land that remained from the 14,000-acre Rancho following the sale of several large tracts. The New Fair Oaks Tract was recorded in September 1886 and was so named because it shifted the alignment of Fair Oaks Avenue from the newly named Lincoln Avenue to a new location to the east, where it remains today. The properties in the district represent the remaining contiguous houses from this early residential subdivision. The lots were purchased by ethnically diverse working class citizens (including carpenters, milliners, clerks, drivers and mail carriers) who built modest vernacular houses. The area was almost completely built out by 1906.

The District contains relatively intact examples of late 19th and early 20th century domestic architecture built between 1886 and 1904, including Queen Anne and Vernacular Hipped and Vernacular Gabled Cottage subtypes. All of the buildings in the district are in their original locations. The scale, rhythm, layout and organization of individual elements within the District is consistent with its original configuration of lots, houses, yards, accessory buildings and architectural styles. The setting has remained residential, with lots as configured in the original subdivisions of the area.

Although many of the buildings surrounding the District have been altered or replaced with new construction, sometimes at a higher density, the general placement and massing of buildings and their relationships to the street and surrounding buildings are consistent with the form of the neighborhood when it achieved its significance. The majority of the original materials that were used to construct the houses has been retained and is evident. The vernacular methods of construction employed when the district was established are clearly evident. The grouping of buildings in the district clearly express the characteristics of a late 19th century working class residential neighborhood in Pasadena.