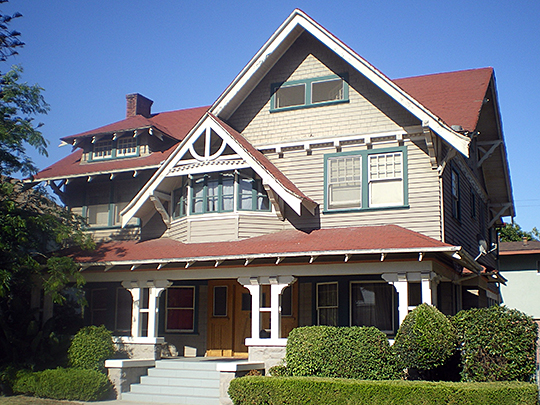 The Van Buren Place Historic District was listed on the National Register of Historic Places in 1989. Portions of the content on this web page were adapted from a copy of the original nomination document. [‡]

The Van Buren Place Historic District is located in south central Los Angeles, approximately four miles southwest of Civic Center and one-half mile northwest of the western boundary of the campus of the University of Southern California (USC). The district consists of a little less than a one-block long segment of a north-south residential street bounded on the north by West Adams Boulevard—the main east-west thoroughfare through the subject neighborhood, and the historic core street of the larger West Adams community. Twelve of the fourteen principal residential buildings are fine, intact, and representative examples of Craftsman-inspired residential design from the period between 1903 and 1910, and which contribute to the architectural significance of the district as a whole. The nicely detailed homes on this block show an imaginative coupling of Craftsman / Shingle Style sensibilities (viz., frame/shingle construction, broad widely-overhanging rooflines, and orientalia, etc.) with decorative elements borrowed from the Tudor Revival, Colonial Revival, and the Gothic Revival.

Roughly half of the houses in the District were built by Percy H. Clark, a distinguished real estate and investment broker in the Los Angeles area. Clark lived in one of the residences. As one of the most intact enclaves of single family residential buildings surviving in the Adams-Normandie neighborhood, it is highly reflective of local design conventions, tastes, and life styles of upper middle-class Los Angeles families during the period between 1903 and 1910.

It is part of the larger West Adams community which enjoyed the status from 1900 to roughly 1950 as one of Los Angeles's most prestigious residential neighborhoods. Within the Van Buren Place District, the affluence and social prominence of the residents is indicated by the occupations listed for them in the city directories of the period, and references in who's who and social directories such as the The Blue Book and Who's Who in the Pacific Southwest. All appear to have been doctors, dentists, business executives, including four prominent real estate developers: Percy H. Clark, George A. Cortelyou, Clarence Minton, and Morris A. Cadwalader respectively.

Subdivided in December 1902 by developer George Woodbury Stimson of Pasadena and improved in large measure by the Percy H. Clark Company, Van Buren Place came into being as part of the West Adams Street Tract, a two block subdivision containing 40 parcels and extending from Budlong Avenue on the east to Raymond Avenue on the west (Adams and Twenty-Seventh Street forming the north and south boundaries, respectively).