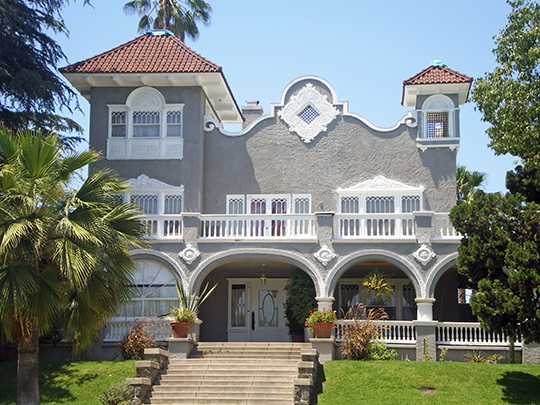 The Alvarado Terrace Historic District was listed on the National Register of Historic Places in 1984. Portions of the content on this web page were adapted from a copy of the original nomination document. [‡]

The Alvarado Terrace Historic District is comprised of 15 buildings which surround a landscaped park and historic brick-paved street. The major houses are sited prominently on a hill-slope above the park, with Alvarado Terrace forming a sweeping curve at its base. These large-scaled houses with their generous setbacks were designed and built between 1902-1906 and represent the work of a number of influential local architects for some of the most prominent citizens of Los Angeles at the time. The district is a cohesive historic neighborhood which retains a high degree of overall integrity; the major intrusion occurred in 1928 with the construction of a large apartment house on the site of an earlier home, breaking up the continuity of the row near its western end. One house has been altered on the exterior by application of stucco over original fabric, but still contributes to the district. Other houses have been altered only minimally over the years and the integrity of the ensemble of homes and their relationship to the park has survived virtually intact. Although in a few cases single family houses have been divided into multiple dwelling units, the exterior appearance and integrity has not been affected.

The Alvarado Terrace Historic District is one of the finest early 20th century residential districts in Los Angeles. This development of large-scaled exclusive homes remains almost totally intact from the period of development in the first decade of the 20th century. The district and its structures have been recognized by the City of Los Angeles Cultural Heritage Board, as well as numerous surveys and architectural publications. The district is remarkable for its architectural quality, integrity, historical associations, and site plan on a curving street. This grouping of houses and its landscaped setting constitutes an oasis of the past within contemporary Los Angeles.

The Alvarado Terrace Historic District lies within the original four square leagues decreed in 1781 under Spanish law as the Pueblo of Los Angeles. The land was first deeded to vineyardist Matthew "Don Mateo" Keller in 1864. After a series of ownership changes, the land was deeded to Doria Deighton Jones, one of the founding officers of the Ladies Hebrew Benevolent Society. Her daughter, Caroline, married Colonel James B. Lankershim, who, with his father, Isaac Lankershim, developed much of the San Fernando Valley. Her son, Mark Gordon Jones, was at one time president of the Merchants Bank and Trust, which later became Security Pacific Bank.

In 1902, Doria Jones had the Alvarado Terrace Tract subdivided. She sold the lots for only $10 each, but required that certain homes be erected that cost not less than $4,000, insuring that the quality of the development be upheld. It was to be what we now call a luxury "bedroom" community: "The only exclusive Residence Tract in the city. A second Chester Place. Beautiful Parks. Shade Trees Planted. High Class building restrictions. No flats, cottages, or stores. Wide streets conforming to the contour of land with cement sidewalks, curbs, and gutters. Perfect sewer system, water, gas, electric lights. Excellent car service, four lines only 12 minutes from City Hall." (1903 real estate sales brochure). The early 1900s was still the "horse and carriage era." All of the homes on Alvarado Terrace had hitching posts in front; one remains at 1333.

Terrace Park was originally subdivided as building lots in 1902. In 1904, through the efforts of Pomeroy W. Powers, resident of the Terrace and president of the City Council at the time, the city purchased the 1.17 acres for park purposes for $7,000. For a brief period, the park was known as Summerland Park, named for Theodore J. Summerland, who served on the City Council. In the center of the park a fish pond was constructed, rosebeds were planted, and the parkway surrounding the park was filled with pink geraniums. There was a subterranean toolshed and the park had a full-time gardener. On November 7, 1904, the name was changed to Terrace Park by action of the City Council. In 1921, the park was remodeled, leaving only grass and trees. The small strip of street paved in red brick, just to the north of Terrace Park, was named for Pomeroy W. Powers in 1911. The brick paving recalls the era when horse power was prevalent in the city. Together, Powers Place and Terrace Park are recognized as Cultural Heritage Board Monument Number 210.