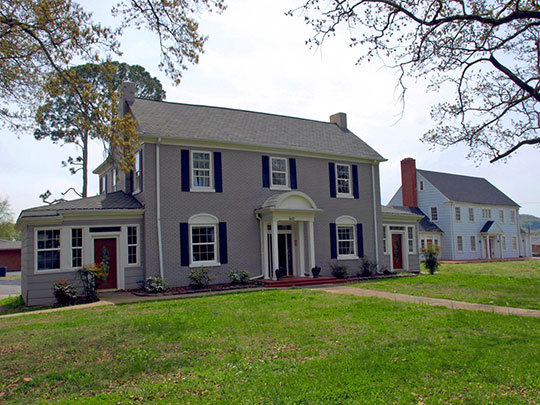 The East Anniston Residential Historic District was listed on the National Register of Historic Places in 1993. Portions of the content on this web page were adapted from a copy of the original nomination document. [‡] .

The East Anniston Residential Historic District is located in northeast Anniston and encompasses an area which includes part of the north-south avenues of Leighton and Christine, the entire length of Woodstock, together with the cross streets from Tenth through Twenty-Second, as well as two blocks of Rocky Hollow, which runs in a northeasterly direction from Sixteenth Street. Rocky Hollow, variously named Lorraine Avenue and Blue Mountain Avenue, was the main path from the sandstone quarry, from which rock was widely used in construction of furnaces, churches, commercial buildings, and in a few cases, residences, in the early town.

The town founders and their Woodstock Company utilized a grid pattern on the compass points in laying out the streets of the early town. Paving, curbs and gutters, sidewalks, and alleys were all a part of the plan. Moreover, beautification in the residential section was an early project. Town council minutes record that in June 1881 over one hundred thousand tiny oak trees were planted along the major streets. Many of these trees survive, and together with the later plantings, convey a park-like atmosphere in most of the district. Of particular note in that regard is the 1500 block of Christine Avenue.

This early residential section of the town contains today 338 major buildings, of which 293 contribute to the historic character of the area, including three already listed on the National Register. The presence of alleys in all blocks led to the construction of dependencies to the rear of many of the lots. There are 135 of these, consisting of garages, servant quarters, small apartments, or combinations thereof, with 109 of these deemed contributing. Of the 473 total number of buildings and dependencies, 402, or 85% are contributing.

Some of the characteristics of the neighborhood, not including the large area of the Educational Park where Anniston High School and six houses are located, are uniformity of setback, lot size (although this varies from block to block), and density. With the exception of the large parking area adjacent to the Anniston High School, which was all once a part of the estate of town founder Samuel Noble, and the parking area next to the old Woodstock School, which was once a part of its playground, there are only eight vacant lots in the district. In each case these were the former sites of residences, which either burned down or were razed.

Within this uniformity, there exists a wonderful stylistic evolution according to the tastes and styles of the times during the long period of significance, as well as individuality of interpretation of those styles. With very few exceptions, no two residences are just alike. From the earlier Queen Anne cottages to the Colonial Revival, Gothic and Tudor Revival, and Mediterranean influences of the stately mansions of some of the early Woodstock Avenue to the twentieth century Prairie houses, to the Craftsman smaller houses, mass built in times of economic flurry, each residence shows individuality.

Also, the neighborhood successfully blends the varieties of style. The juxtaposition of such outstanding examples of 1880s and 1890s Queen Anne cottages as on Rocky Hollow, on E. 22nd St., on E. 19th St., and on Leighton Avenue with examples of high style such as Crown Cottage, a Richardsonian Shingle style house, or the revival style houses, or the twentieth century Prairie examples, or the simple Craftsman houses, the result is a pleasant, harmonious whole.

Although there are abundant examples of the two-story houses, the majority consists of the one-story Craftsman cottages, constructed to be single family dwellings and remaining as such. These Craftsman houses show great individuality in roof style and porch treatment. All the houses, however, uniformly show good workmanship and share the predominant use of brick and wood, with some stone, stucco, and modern siding present. The district, moreover, also exhibits a high degree of maintenance, resulting in the good condition of most of the buildings.

Despite the variance of period, style, and even a range of middle to upper income housing, the overall impression is of homogeneity in a neighborhood that persists in remaining predominantly residential despite the intrusion of some professional offices and businesses.