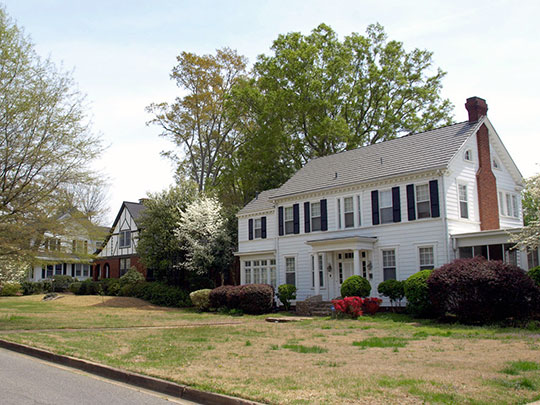 The Glenwood Terrace Residential Historic District was listed on the National Register of Historic Places in 1985. Portions of the content on this web page were adapted from a copy of the original nomination document. [‡] .

Glenwood Terrace is a stately tree-lined boulevard, one lane on each side of a park that features cast-iron pole-mounted street lights of the variety that once lighted the downtown area. Broad lawns, flowering shrubs, tall oak trees, large houses, and the central park area all give a tone of spaciousness and serenity to this elite residential area. The oldest part of the street, from Highland Avenue to Jefferson Avenue, encompasses fifteen houses, all two or two-and-a-half-story with the exception of a one-and-a-half-story and one non-contributing house that is one story. The street was designed to be an outstanding residential area and this character has been maintained. The dwellings are all detached, single-family residences representing a wide variety of types and styles popular in the World War I era and after: Classical Revival, Colonial Revival, Dutch Colonial Revival, and Tudor Revival. A variety of materials have been utilized, including brick, stucco, clapboard, shingles, and tile, to present a feeling of variety in the neighborhood, yet the image is one of cohesiveness of style, tone, scale, and uniformity of setback from the street; all qualities that distinguish the district from the surrounding areas.

The area where the Glenwood Terrace Hill is located was once part of a dairy farm, with a row of mock orange trees running along the fence. One of the trees still remains in the yard of the house at 800.

The four men who developed the area in 1915, W. H. Orrison, W. G. Johnston, L. C. Watson and Walker Reynolds, at first thought of extending Oak Street but then conceived of a broader, park-centered boulevard, and the extension of Oak Street became an alley behind Glenwood.

They planned for the parkway, the large lots, landscaping, and the unique feature of the street; the cast-iron pole lighting, the only such lighting on a residential street in the town. The poles were made in Anniston and were identical to the downtown street lamps (as well as those sent to New York City) except that the five branched smaller globes were replaced by one large globe at the top. The street was the first one in Anniston to be planned in a similar fashion as Quintard Avenue, the town's original elite residential street with its central parkway. Glenwood Terrace is on a much smaller scale, but remains today the only intact neighborhood of its time period, and a marvelous example of residential planning at its best.

The boundaries for the district were selected primarily because of the time period of development. The first section of the street to be platted in 1915 included blocks 1 and 5 of the Tyler Park Addition (houses 800-901). The four remaining lots to Jefferson Avenue (905-930) were opened in the early 1920s. Above Jefferson, there is an abrupt decline in the concentration of architecturally significant houses. Moreover, beginning with the 1000 block the area was developed over a longer period of time with some houses only a few years old.

The architectural design values, the planned streetscape, the integrity of the area, all contribute to the quality of the historic district as representative of Anniston's peak prosperity.