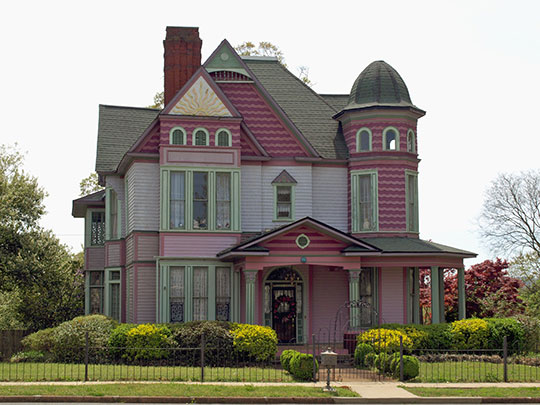 The Tyler Hill Residential Historic District was listed on the National Register of Historic Places in 1985. Portions of the content on this web page were adapted from a copy of the original nomination document. [‡] .

The Tyler Hill Historic District is significant as the largest concentration of elaborate high-style houses remaining in Anniston. The houses display the similarities of form, materials, decorative details and stylistic variety typical of Victorian residential architecture. The variety of houses found within the district range from the grand Chateauesque house built for the developer of the district to simpler two-story clapboard houses enlivened by porches and decorative gable ends.

The reorganization of the Woodstock Iron Company brought a new group of business and industrial leaders to Anniston who needed and wanted housing commensurate with their means and station in the city. To answer this need, part of the original Tyler estate was deeded in 1888 to Duncan T. Parker and James W. Lapsley who in turn organized the Tyler Hill Company and proceeded to subdivide the area and sell lots. The entire platted area was not fully occupied until later, but almost immediately those lots nearest Tyler Square Park were developed by Parker and members of his family. Parker himself erected the most outstanding house in the city on several lots in block 4 to the southwest of the square; his daughter Susie Parker Stringfellow built on the south side of the square, while Parker's sister, Mary A. Frye, constructed her house on the east. To the north of the square (excluded from the present district) were two large homes, both destroyed by fire shortly after completion and not rebuilt. Modern houses now occupy that area.

The streets on Tyler Hill were all named for prominent citizens. Leighton Avenue, to the west, had originally been named Rome Street (the Nobles had moved to Anniston from Rome, Georgia). Leighton was the middle name of Tyler's son Edmund. Lapsley was in honor of Judge Lapsley, president of the Tyler Hill Company. James B. Goodwin was an early Anniston settler and secretary of the Anniston Manufacturing Company. John B. Knox, who soon purchased one of the largest houses on Sixth Street adjacent to the square, was an outstanding attorney, later president of the 1901 Constitutional Convention.

Aside from the razing and replacement of some of the structures, the district looks today much the same as it did in the 1890s and early 1900s, with no major renovations or additions to any of the remaining houses. Tyler Hill remains a symbol of the flush industrializing era of the 1890s.